Women premiers get pushed out of leadership faster than men. What gives?

On average, women hold premierships for shorter periods and are more quickly pushed out by caucuses. A new study tries to figure out what’s really going on. 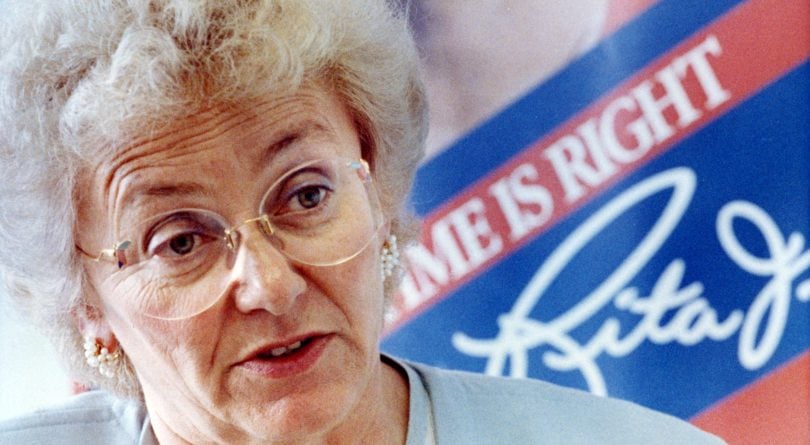 Rita Johnston, pictured in July 1991 in Vancouver, was the first woman to become premier of a Canadian province. (Chuck Stoody/CP)

A new paper sheds light on the circumstances under which women have become provincial premiers in Canada—and the findings fly in the face of conventional wisdom.

Melanee Thomas, an associate professor of political science at the University of Calgary, writes that women are less likely worldwide to serve as “chief political executives” (presidents, premiers or prime ministers). And in a Canadian context, they comprise less than one-third of cabinet ministers in any level of government; at the municipal level, women are less likely to serve as mayors, too.

In a new paper published in the June issue of the Canadian Journal of Political Science, Thomas closely examined the ascendance of the eight women who have served as provincial premiers in Canada since 1991 (there were 50 men over the same timeframe, excluding anyone who served in an interim capacity). She chose that role because Canada has had a sudden boon of female premiers in recent years, and it’s a powerful office with responsibility for major programs including healthcare, education and child care.

Of Canada’s eight female premiers, six—or 75 per cent—vaulted directly into that office after being selected as leader through internal contest for parties that were already in government. A slight majority of the men, in contrast—56 per cent—became premier by winning a general election after first being selected leaders of their parties.

Thomas set out to try to explain that “stark difference” in circumstances, by testing the most common explanation in academic literature for how women tend to become leaders of electorally competitive parties: in moments of decline or crisis. “The parties are in a position where they know that they’re cruising to lose the next election, or they think that they’re in real trouble, so they think, ‘We should totally change the channel and do something very different in terms of leadership,'” she says, by way of explaining the collective mentality that might lead to women getting a shot at leadership. But, she argues, women are also savvy observers—in academic terms, “strategic actors”—who know that when a party is in a bad spot and the men who are usually funnelled into these roles might opt out, that’s often a good moment for them to make a move.

In testing whether this theory held in these eight cases, Thomas defined a party as being in crisis if it suffered a major scandal or “catastrophic” electoral defeat—a run-of-the-mill loss at the ballot box wasn’t enough to be considered a crisis. A party in decline, meanwhile, was one suffering a slow and appreciable erosion in support, which had to be clear before the party selected a female leader. “My goal was to see if I could find really clear evidence that the parties were losing support and knew it before these women were selected,” she says. “I think a lot of people look at stuff that happens well after a leadership contest and they say, ‘Oh, they must have been in decline.'”

MORE: Was Kathleen Wynne’s concession a power move or a desperate act?

To assess that, Thomas examined five indicators of a party in decline: changes in votes or seats from one election to the next leading up to a leadership contest; the stability of a party’s support, where riding boundaries stayed consistent and allowed for apples-to-apples comparison over time; by-election results between general elections; party fundraising; and publicly available opinion polls.

“I know what somebody is going to say: they’re going to say polls are crap, and we shouldn’t use them for anything,” Thomas says, chuckling. But she has good reason for including them. “The counterpoint I would make is for these polls I don’t really need to know—nor do I actually care—how good they are; I care that they form part of the public record.” It doesn’t matter if the polls were wrong, in other words—what matters is that they are part of the narrative in the moment of how a party is doing, so it’s relevant to consider how voters and party operatives react to that.

Of the eight female premiers Thomas assessed, two were selected to lead parties obviously in crisis. Rita Johnston became British Columbia’s premier—and Canada’s first female premier—in 1991 at the helm of the Social Credit party, after Bill Vander Zalm resigned amid conflict of interest accusations about mixing his public office with his private business interests. A few months after Johnston took over, her party was decimated in a general election and reduced to seven seats in the legislature; in the following election, they were wiped out entirely.

Pauline Marois, meanwhile, became leader of the Parti Quebecois following three successive elections in which the party hemorrhaged support, ultimately finishing third for the first time in 30 years. She became Quebec premier after her party won a general election in 2012, but they were out of power and destroyed at the polls less than two years later.

In examining the evidence for parties in decline, meanwhile, Thomas found that only the Ontario Liberals were clearly in trouble before they selected Kathleen Wynne to be leader—and premier—in 2013. “Only Kathleen Wynne, back when she was first selected leader, is taking over a party where they’re in government, but if an election was held that day, they would not have won,” Thomas says. That they did win the following year suggests that either Wynne was a strong leader who managed to steer her party to victory in the face of what should have been certain defeat, or it came down to “PC incompetence,” Thomas says.

So, of the eight female premiers she studied, two were indeed selected in times of crisis, and one in a moment of decline. A fourth, NDP leader Rachel Notley in Alberta, follows another “textbook pattern in the literature,” Thomas says: she was selected to lead a party that was at the time electorally uncompetitive. “So her leadership contest is super-consistent with women’s leadership selection patterns for parties in Canada,” Thomas says. “And then her entry into the premier’s office is consistent with the pattern that we see for men.” By that, she means that Notley led her party to victory over an incumbent government and assumed the premiership as a result.

It seems a virtual certainty that Wynne’s time as premier will be over as of Thursday when Ontarians vote, and she has conceded as much herself. If the NDP were to win and Andrea Horwath became premier, her path would also follow the more typical male script, Thomas says: she would have led her party through three election campaigns before finally having her breakthrough, much like Jack Layton did with the federal NDP.

Thomas’s analysis still left her with four of the eight female premiers—Catherine Callbeck in Prince Edward Island from 1993 to 1996, Kathy Dunderdale in Newfoundland and Labrador between 2010 and 2014, Christy Clark in British Columbia from 2011 to 2017 and Alison Redford in Alberta from 2011 to 2014—whose path could not be explained by the crisis/decline narrative. “It raises a more profound question,” Thomas says. “With the exception of Kathleen Wynne, four of these women weren’t taking over weak parties. They were taking over parties that were in reasonably good position, so why were they pushed out so quickly?”

She would like to see more research on the circumstances of women’s exits from politics, and some of her colleagues have found that female leaders have shorter tenures than men, especially when their parties are electorally competitive. “They push women harder and faster than they do men. Men are given the privilege of being able to choose when they want to leave,” Thomas says. “Women not so much.”

To argue that women get a shot as leaders only when parties are in crisis or decline “gives people a pass” on how they judge women by harsher standards and how sexism comes into play once they start exercising power, Thomas argues. “I think we need to think carefully about the pathways other than the crisis and decline narratives,” she says. “I’d like to see a world where women just seek leadership in the same way that men do. I don’t think we’re there yet.”