A saviour in Pyongyang 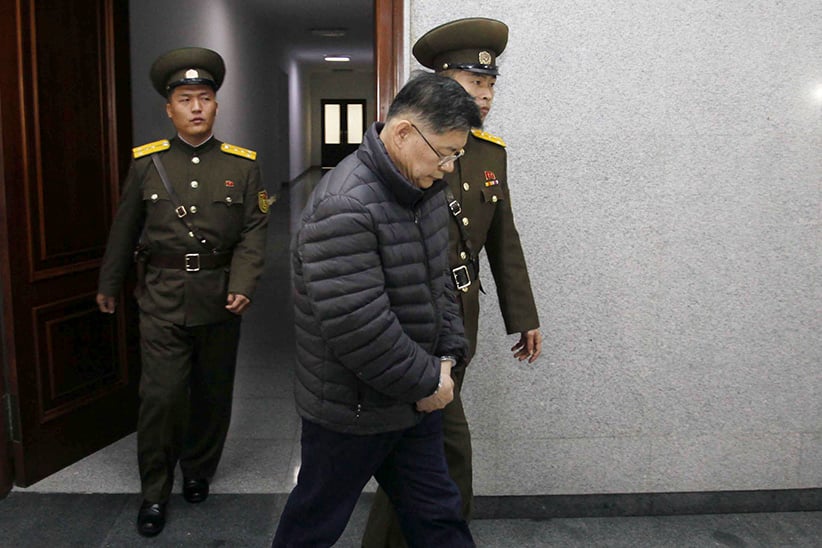 Hyeon Soo Lim, center, who pastors the Light Korean Presbyterian Church in Toronto, is escorted to his sentencing in Pyongyang, North Korea, Wednesday, Dec. 16, 2015. North Korea’s Supreme Court sentenced a Canadian pastor to life in prison with hard labor on Wednesday for what it called crimes against the state. (Jon Chol Jin/AP)

Rebecca is singing again. She sang along to her uncle’s guitar growing up in North Korea. She sang in school musicals after her mother, a black market trader pursued by the Chinese police, left her in a Chinese border town. And she fantasized about singing professionally until some strange men promised her a real gig, which is the only reason she got in their car.

The gig was bait. Her mother had hired brokers to reunite them in South Korea after she’d fled to Seoul. Quietly, Rebecca went where asked: across the hills of China, the swamps of Vietnam, the detention centres of Cambodia and, finally, to South Korea. Rebecca met some pastors, converted to Christianity, and has ended up here: at Grace Church, in a sprawling Christian neighbourhood in south Seoul, singing hymns into a microphone for a room of 50 other North Korean defectors.

Of the 28,000 North Korean defectors who have come to South Korea since the 1990s, thousands have joined congregations like this one. Seoul is home to several of the world’s largest megachurches, which often give defectors financial and emotional support. But Christianity reaches a couple of hundred kilometres north of Seoul, too, deep into the country that was once so Christian its capital city was known as the Jerusalem of the East—Pyongyang, in the Democratic People’s Republic of Korea.

Christians from the south and abroad use various methods to minister to North Koreans: some try to evangelize surreptitiously inside the dictatorship, some send aid across the border, some spirit defectors across Asia and some toss Bibles in the air and hope they land in the right hands. Often they run afoul of Pyongyang: Last month, North Korea gave a life sentence to Lim Hyeon-Soo, a South Korean-born Canadian pastor and humanitarian who built orphanages, nursing homes and farms in North Korea during some 100 trips to the country, via China. (North Korea convicted him of carrying out “subversive plots.”) Occasionally Christian activists also clash over whose method of spreading the Word is best.

As Rebecca sings, the man who helped her mother escape to South Korea rolls his eyes. The lyrics projected on the wall are about faith, and Kim Sang-Hun thinks North Koreans need more than that. The 81-year-old self-described rebel who used to collect testimony of North Korean human rights abuses wishes the church would pray less and advocate for North Korean human rights more. “When a child is drowning, it’s no time to go and have faith in Jesus,” he says. “Do something!”

Since the 1880s, Protestant Christians have done many things in Korea. They built a strong following in Pyongyang—so strong, that after the Korean War their presence in the north threatened the new regime. For the next six decades, each Supreme Leader has demanded that citizens worship him as a god. The appearance of religious tolerance is maintained through a few state-sanctioned churches. But experts say they exist to raise foreign donations and reportedly feature choreographed congregations and sermons extolling the evils of South Korea and the United States.

Still, tens—maybe hundreds—of thousands of Christians worship secretly in North Korea. Some are flushed out by specially trained security agents, interrogated, tortured and possibly executed. Open Doors, which tracks Christian persecution around the world, estimates that between 50,000 and 70,000 North Korean Christians are in prison camps. Foreign missionaries, once so influential in Pyongyang but now compared to vampires and wolves by the regime, can’t hand out Bibles or speak explicitly about God to North Koreans, or they could go to prison too.

John Short nearly went to prison. When North Korean minders discovered one of the leaflets the Australian was dropping around the country’s metro and temples, they took him in. For six hours a day for 13 days, they made the septuagenarian talk. To questions he gave only Biblical answers. It angered the interrogators, but may have also convinced them that Short wasn’t politically motivated.

“The investigation was always meant to link me to the Big Satan, America,” says Short, on the phone from Hong Kong. He suspects he benefited from being unattached to a religious institution, unlike other foreign Christians who have entered North Korea on their own or through schools they teach at. “I’m not a Church man,” Short says. “I’m a Gospel person.” Short doesn’t regret dropping the leaflets, even though most North Koreans would never have seen them. Planting a few seeds was enough.

A few nights before Christmas, Pastor Tim Peters is slipping vegetable seeds into miniature Ziploc bags. His old Seoul storefront is plastered with pictures of Jesus. Peters sits under a simple poster: “Behold, a sower went forth to sow.” A coincidence, sort of. Like Short, Peters is an evangelical Christian; unlike Short, the American is a human rights advocate. His organization, Helping Hands Korea, ships food and clothes into North Korea from China, and gets North Korean people out of China. After North Koreans started fleeing famine in the 1990s, Peters built an underground railroad of buses and hiding places snaking through Asia—some routes go through Mongolia, others through Laos, but all lines lead to South Korea.

Activists like him and missionaries doing work in North Korea rarely mix. “If [missionaries] are even observed associating with [us], that can be used as ammunition by the authorities,” Peters says. “The people that go and work inside, they can’t have that on their resumé.” Peters doesn’t criticize missionaries for entering North Korea. But he worries about their odds and the risks. “How many people have become Christians from visits [to North Korea] from foreign clergy? In my opinion, that would be minuscule, absolutely minuscule. Foreign ministers are really not allowed to speak to anyone who has not already been vaccinated against that message.” Peters hopes evangelical messages will be delivered by example, at least. Maybe the people he ushers out of China will recall that some kind Christians once helped them. 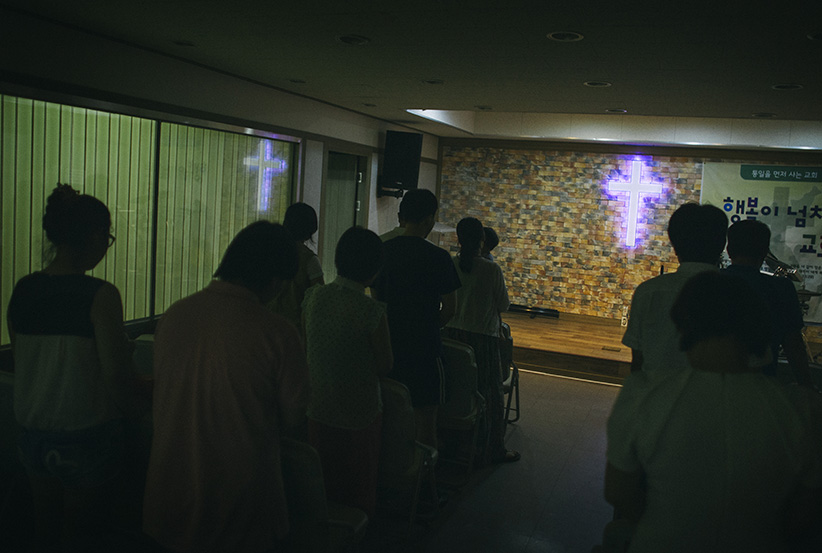 On Christmas Eve in a Seoul recording studio, another Christian is busy at work. “Hello!” Pastor Eric Foley flashes a smile; the message he and his wife, Hyun Sook Foley, are recording won’t be delivered until the new year, when their voices will crackle over illegal radios north of the border. They are the founders of Voice of the Martyrs (VOM) Korea, a non-profit organization that helps North Koreans minister to other North Koreans. Foley likes to say that Pyongyang regularly jams his program. It may be a sign that Christianity threatens the regime’s religion of self-reliance. But regime change isn’t what Foley is after. Nor is defection.

For all the sins of their government, North Korean refugees in Seoul get homesick, Foley says. Discriminated against. Suicidal. “If we’re preparing for unification, preparing to escape, preparing for whatever, we’re trying to find a happiness it turns out never comes,” he preaches.

Foley has preached before that Western Christians shouldn’t pity the Christians in North Korea—North Koreans can know God more fully when God is all they have. And he says foreign missions to North Korea, humanitarian aid going into North Korea and human rights advocacy around North Korea aren’t always helpful to North Koreans. “[North Korean Christians] have found a faith worth dying for, and so they consider it to be part of their purpose or mission or calling to remain in their country,” Foley says. “It has not been our experience that they cry out, ‘Help us! Do something!’ ” There’s also the uncomfortable fact, Foley explains, that Christianity can only survive in North Korea if Christians actually live there.

For the ones who have already left, VOM’s Underground University in Seoul trains North Korean Christian defectors to evangelize to their countrymen on both sides of the North Korean-Chinese border and beyond. Some will return to North Korea—of their own free will and after lots of prayer, Foley stresses. All true Christians are martyrs, he adds.

But missionaries and radio waves can’t reach everyone, so there are always the balloons. Thousands of rolled-up Bibles are stuffed into latex, packed in Tupperware and stacked on top of each other in VOM’s basement, waiting to be thrown on a truck, filled with helium, and sent over the heads of the South Korean police officers watching warily. In 2013, VOM says it launched 50,000 New Testaments over the border and, perhaps, into North Koreans’ hands. Picking one up can be a fatal decision. But Foley says North Koreans know danger when they see it. He cries every time the balloons rise up because they’re carrying the word of God, not a death sentence in disguise.

Whatever way North Koreans first hear of Christianity—over a hidden radio, in a stray leaflet or, more likely, courtesy of a South Korean church welcome wagon—the faith echoes a familiar ideology. With just a few substitutions of Dear Leader for Jesus, some visitors to Pyongyang say they’ve heard a strange harmony between Christian hymns and odes to the North Korean regime. Swaying back and forth in Seoul’s Grace Church, Rebecca sings her new lyrics easily, her voice high and bright.