After Brexit, who could be next to bolt? 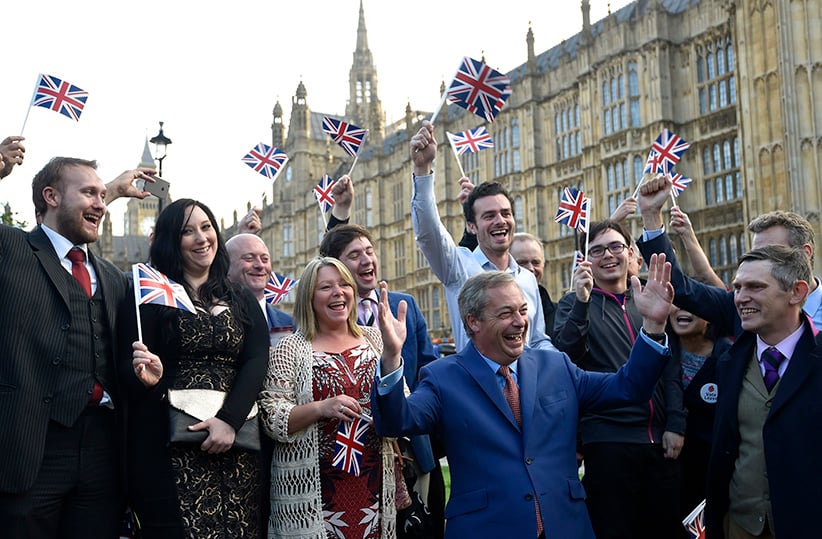 Nigel Farage (front), the leader of the United Kingdom Independence Party (UKIP) reacts with supporters, following the result of the EU referendum, outside the Houses of Parliament in London, Britain June 24, 2016. (Toby Melville/Reuters)

European Council President Donald Tusk’s warning was dire when he spoke to the German newspaper, Bild, a couple of weeks ago. “As a historian I fear that Brexit could be the beginning of the destruction of not only the EU but also of western political civilization in its entirety.” Now that the UK has voted to leave the European Union, what will be the fate of the powerful alliance of 28 member states—and which nations could be the next to go?

Immediately following the shocking results of the Brexit referendum, right-wing, populist or anti-immigration political leaders and parties in Sweden, Denmark, France, the Netherlands and Italy demanded a similar vote. A large proportion of that is likely mere noise that stands no real chance of gaining traction, but it’s certainly in the air.

Sweden and Denmark in particular are worth watching. Both countries were closely aligned with the U.K. on a host of policy issues, and they’re likely to feel they’ve now lost a powerful ally. The two Scandinavian countries have relatively robust political and economic systems, and may chafe at the idea of buoying up weaker southern European partners.

There has also been widespread angst in Sweden, Denmark and the Netherlands over their ability to absorb and integrate the high numbers of newcomers taken in during Europe’s refugee crisis. All three nations have seen the rise of right-wing, populist politics in response, mirroring the growth in popularity of the U.K. Independence Party that helped propel the “Leave” campaign to victory.

There are also acute fears that Greece, sagging under a tattered economy and an influx of migrants, will be kneecapped by the economic impact of Brexit within the EU, and also see its exports to the U.K. fall and tourists stay away as the pound takes a hit. The U.K.’s exit could also make the EU jittery and less inclined to compromise internally—something that could push Greece, as one of its most troubled members, out the door.

The specific concerns of those countries aside, a poll by the U.S.-based Pew Research Center of almost 10,500 people in 10 EU nations in April and May demonstrates deep veins of frustration running through member states and citizens. Most dissatisfied overall are Greece (just 27 per cent view the EU favourably), France (38 per cent), the U.K. (44 per cent) and Spain (47 per cent); the median across all countries polled was 51 per cent. In contrast, happiest with the EU are Poland (72 per cent favourable), Hungary (61 per cent) and Italy (58 per cent).

Refugees are the biggest sore point, with the overwhelming majority of citizens polled telling Pew they disapprove of the EU’s handling of that issue. Greece (94 per cent), Sweden (88 per cent) and Italy (77 per cent) are the most dissatisfied, but in reality, no one is happy on that front (the Netherlands, for instance, is the least disapproving—and even there, only 31 per cent approve of the way the refugee crisis is being handled).

Overall, 70 per cent of citizens thought the U.K.’s departure would be a bad thing for the EU. What remains to be seen is whether these percolating frustrations will be enough to push any other nations to follow suit, whatever the cost. “Every family knows that a divorce is traumatic for everyone,” Donald Tusk told Bild.