Mission accomplished? Not quite. American negotiations with Europe may trigger more changes to CETA 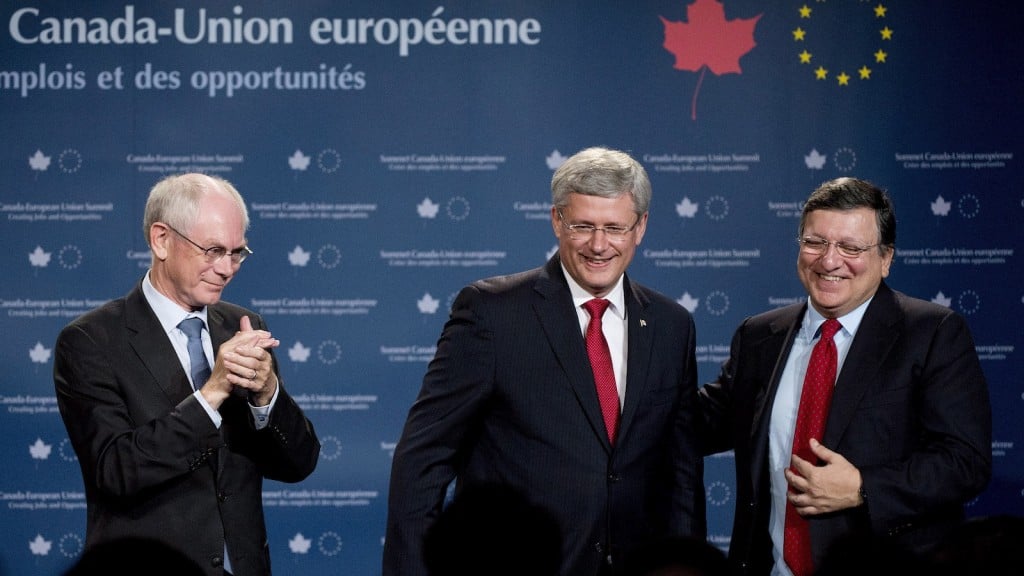 The Conservative government’s much-touted trade deal with the European Union is set to quietly undergo changes over the next months, sources say, and that could push back the agreement’s final implementation.

At issue are existing investment-protection provisions in the Comprehensive Economic and Trade Agreement (CETA), which are likely to be revised due to opposition from civil society groups and various political factions in the EU.

The move raises concerns about delays in inking the final signature on a deal that, twice before, has been celebrated as complete. Any delays are not likely to sit well with the ruling federal Tories, who are gearing for a fall election, observers say.

The bump in the road stems from the EU’s controversial trade talks with the United States, called the Transatlantic Trade and Investment Partnership (TTIP). A point of contention has been the so-called investor-state dispute-settlement mechanism, or ISDS. That provision gives corporations the right to seek compensation from states through international tribunals if government policies hurt their business interests.

EU-U.S. negotiations on this topic have been on hold over the last year due to public concerns that the provisions limit a government’s ability to regulate to protect public health or the environment. Canada asked for the inclusion of ISDS in CETA, wishing to preserve a model that operates under NAFTA. The EU agreed to the investment-protection provisions before the controversy erupted with the U.S.

Related: 10 things to know about CETA

The EU’s trade commissioner, Cecilia Malmström, this week proposed reform to ISDS provisions in TTIP—changes that could have implications for Canada. “We will propose any further changes we collectively agree on in TTIP to the Canadian government,” Malmström told members of the European Parliament’s international trade committee on March 18. “But I do not want to raise anyone’s hopes. From Canada’s perspective, this is a done deal.”

However, a diplomatic source, speaking on condition of anonymity, said a new ISDS proposal “will most likely have an effect on CETA” and, the source added, that may require a new conversation with Canadians to agree on small changes.

But none of this will come as a surprise to the Canadian government. The signs have been there for months. Canadian officials have been following the TTIP negotiations over the last year—and are considering the impact any obstacles could have on their own deal.

France and Germany have, for six months, expressed doubts over the existing ISDS provisions in CETA. In a joint declaration at the end of January, the two countries said the European Commission’s ISDS analysis should also spur changes to the Canada-EU trade deal. Opposition also exists in the European Parliament, which will have to give the agreement a final blessing. The Socialists and Democrats—the assembly’s second-largest group—oppose ISDS in TTIP, but would support reforms in CETA.

“We have seen some improvements in investment protection in CETA, but we are not there yet,” said David Martin, a British Socialist-Democrat member of Parliament who sits on the international trade committee. “I am confident further reforms could deliver a positive agreement.”

Commission officials emphasize that any changes to the Canada-EU deal hinge on prior agreements on how to move forward with the Americans.

The commission will have to wait for members of the European Parliament to decide in a plenary vote in June on their ISDS stance in TTIP, then form a united EU position with member countries. Only then could the commission pursue a new conversation with Canada.

Prime Minister Stephen Harper announced the official end of CETA negotiations in August 2014 after five years of rocky talks. That declaration came after the announcement of an “agreement in principle” in October 2013.

Related: Why Stephen Harper has reason to celebrate CETA

The CETA text is currently in the so-called legal scrubbing phase, during which officials make minor stylistic and linguistic touch-ups, without substantial changes. No one is talking about officially reopening talks on the 1,600-page text. There is an understanding on both sides of the Atlantic of the risks inherent in that proposition.

However, a European parliamentary official said prospective changes will be more substantial than what the legal scrubbing process allows. “Even if the CETA text is closed, some changes will have to take place beyond adding some commas,” the source said, speaking off the record. “How many changes can you make before actually reopening it?”

Officials close to the negotiations say ISDS changes could be introduced in a process parallel to the legal scrubbing. Others speak about the possibility of using the treaty’s revision clause, which would allow—under consensus—amendments to the text. Another option could be a joint statement attached to the text allowing for a common interpretation of ISDS rules.

“But we can’t do anything without the agreement of Canada, or vice versa,” one EU official said.

If both sides agree, “a fine-tuning of CETA may be feasible, without unravelling the overall results,” a commission official said.

Speaking on condition of anonymity, sources close to the negotiations said that since some modifications can be completed more quckly than others, no one should expect that anything the EU would propose “will be just shoved into CETA.”

John Babcock, a spokesman for the Department of Foreign Affairs, Trade and Development, said in an emailed statement that CETA “contains the most progressive provisions on ISDS ever negotiated.”

Sources close to the negotiations say the Canadian side wants to avoid being dragged into any long conversations ahead of this year’s federal election—when the governing Conservatives will pitch CETA as a big win for the government.

“Moving towards implementation of CETA as soon as possible is a priority for the government of Canada,” Babcock said.

The legal scrubbing phase is followed by translation in all official EU languages, which is likely to take another eight months, sources say.

Commission officials say the process is continuing as planned. They are reluctant to predict any timelines, but say that the process could “hopefully” conclude this year.

The deal is not expected to kick in before 2017.

Some observers say the ISDS revision process leaves a door open for Canada to haggle for anything extra it wants included in the deal.

But an EU source cautioned against that kind of talk. “The moment we start playing tit-for-tat, it will not end well.”