Chuck Todd on the failures of the Obama presidency 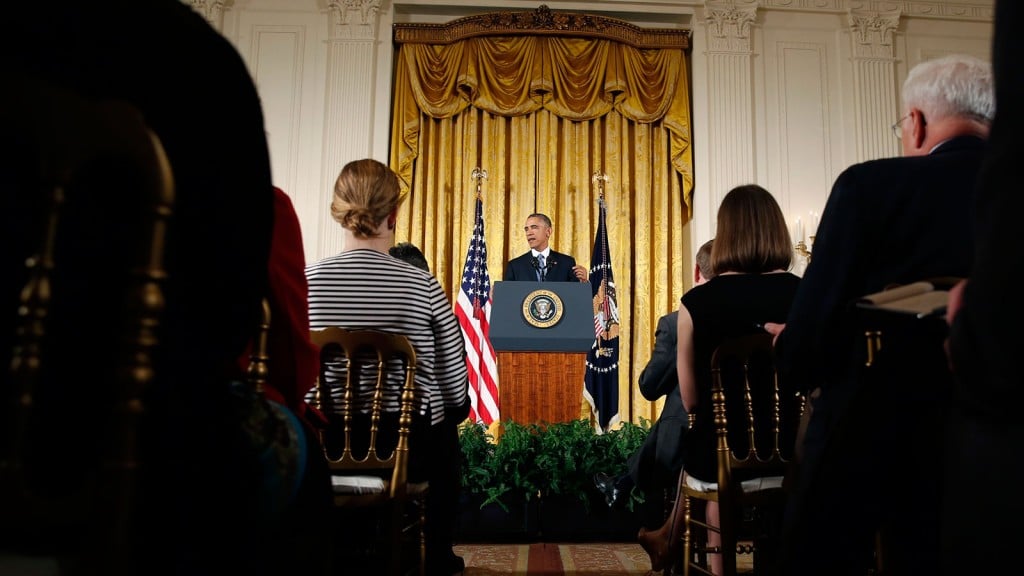 Former White House correspondent for NBC News, Chuck Todd took over as host of the network’s iconic Sunday morning political talk show, Meet the Press, in September. His new book, The Stranger, traces the presidency of Barack Obama as the story of an outsider who set out to change the ways of Washington, and failed.

Your book reminded me of Obama’s own memoir, ‘Dreams of My Father.’ I remember reading it in 2008 and thinking: this guy has a real journalistic sensibility, he’d make a great reporter. He’s interested in the world, analytical, and sees the shades of grey. But I also wondered whether those qualities could make a good president. You seem to think not.

It depends on how you’re judging him. When you cover him from the beginning of his political life, you can’t help but cover him in the light of the promise he made in 2004 to unite “red” and “blue” America, to change the way we conduct our politics, to try to get rid of political polarization. And now some would say political polarization is worse than when he came in; I would argue it’s the same. The question is why?

Did he ever stand a chance—give the ideological pressure on congressional Republicans from their grassroots?

He was handicapped in a couple of ways. He was immediately in crisis mode, having to deal with the Great Recession. That made it feel like he couldn’t put the early stamp on Washington that he wanted to. But I would argue he missed an opportunity.

In a way, I think Democrats were too successful in 2008. Had Democrats won with only 52 Senate seats instead of 59, and then [gained a filibuster-proof majority of] 60, he would have been forced to think about how to build a Republican coalition while it was still doable. Because he didn’t need them, when things got rough he could walk away. But boy, what could have been if those first two years had gone differently.

Give an example of where he walked away.

The first big opportunity where he could have put a stamp on Washington was an early spending bill that was supposed to get done in 2008. It was filled with political pork—the stuff that Obama had opposed strenuously in his campaign. But he got advice not to pick a fight with congressional Democrats. He signed the bill while lecturing that he won’t do something like this again. But it sent a message early on that he would capitulate to the congressional Democrats. Had he vetoed that bill, Democrats would have howled but it would have set him apart as an independent actor in Washington and it would have opened the door to work with a small group of congressional Republicans. One thing I’ve scratched my head about is that if you look at Reagan, Clinton and George W. Bush, they all looked for allies in the Congress—for a group of five or six members from the opposing party they could work with. But this administration always tried to work through the Republican leadership team. Those leaders are hired to defeat you, not work with you. It’s only individual members you can work with.

You write that Obama is dealing with a city full of people “he doesn’t get.”

I think he’s the most anti-politician we’ve had in the White House perhaps since Dwight Eisenhower. He doesn’t have that same neediness that some politicians naturally have. He’s never needed validation from others. It’s not part of his DNA. It’s what made him so refreshing to a lot of people as a candidate, but if you don’t need it, you don’t know how others need it. I think he rolls his eyes at some of the things he needs to do: whether it’s the “theatre” of the job that he has admitted he’s not good at, or making phone calls or having one-on-one lunches with senators to show that you are listening.

Have any foreign leaders broken through?

The one foreign leader he has the best personal relationship with is German Chancellor Angela Merkel. When there was a financial crisis in Greece that threatened the broader economy, he and Merkel talked constantly, multiple times a week. They developed a good personal relationship, but the NSA scandal [in which Merkel’s cellphone was tapped] really hurt that. When it comes to relationships with world leaders, it’s the part of the job he was looking forward to the most—and it’s been one of the most disappointing.

An issue between the Canadian government and this administration has been the Keystone XL pipeline. Where do you think the President stands?

He thinks it’s overly symbolic: not as bad for the environment as some people think, and not as big for the economy as others think. At this point it has become such an important symbolic issue to the environmental community and there is some guilt there with him.

He feels like he has not made the progress on climate change he has wanted to make. In his first term, he picked health care over energy and climate. They tried to do both at the same time, but both weren’t possible. I think he felt a debt to the environmental community. So he talked about climate change in his second inaugural speech and is trying to fight for it now.

Republican leaders have said if the pipeline is not approved by the time the new Congress is seated in January, they will pass legislation to authorize it. Will the President veto it?

I can’t imagine it. If it’s part of some other bill he needs to sign into law, I fully envision him signing it. I think it’ll be something Republicans will try to do early.

What do you see coming in the next two years, with Republicans in control of both houses of Congress? Pure gridlock, or can they make deals?

I think the President feels a sense of freedom that he didn’t have before. He spent an entire six years in Washington having to protect House Democrats or Senate Democrats, capitulating to them. I think they will be open to more deal-making than people realize on issues like criminal justice reform, taxes, trade . . . but health care and immigration could bring back partisanship in a second.

You make a surprising comparison between Obama’s health care reform and Bush’s war in Iraq.

Both presidents had a crisis in their ﬁrst year: Obama had the recession and Bush had 9/11. They both attacked the problem immediately: Obama with stimulus spending and Bush by invading Afghanistan. And then they both went a step further. President Bush talked about a pre-emptive strike to prevent another safe haven for terrorists. Obama said health care was an issue of fundamental economic security. But it created a polarized environment that coloured their entire presidencies.

You argue that health care became a policy priority almost by accident.

The idea of it becoming his first-term priority was a throwaway line when his speechwriters realized he was having to speak to an important health care constituency group in 2007. He didn’t have a plan so he gave them a promise: he promised to sign universal health care reform in his first term. And now his legacy is, I think, connected to the success or failure of health care reform for the next decade. Even if the economy recovers but health care is a failure, his presidency will be coloured by his failure—the same way George W. Bush is defined by the Iraq war.

You write that when voting for president, Americans have a tendency to hire the candidate who most possesses the qualities that the previous president lacked: “With Obama, the professorial, nuanced thinking candidate seemed like everything George W. Bush wasn’t.” What does that mean for 2016?

I think it means the country is going to be more cynical—maybe that’s not the right word. A successful presidential candidate is going to have a realistic message that doesn’t evoke “hope and change,” but something more like “duty” and “getting to work.” Hope and change now look naively optimistic. Maybe it means someone who is a little more abrasive, a hands-on manager. Maybe even someone physically different: Obama was a skinny guy with an even-keeled Midwestern temperament, so maybe a heavy-set guy from New Jersey with a more aggressive style.

What about a woman?

I think Hillary Clinton and Barack Obama are more alike than people realize. She is more like Obama temperamentally than like than her husband. Bill Clinton and Barack Obama are polar opposites: one loves politics and one doesn’t. There is a saying that sometimes you have to climb the greasy pole of politics—and Obama never did that. Politicians who have done that understand it and, in a weird way, love it. So if you’re her, what you do to pitch yourself as different from Obama, it’s not just gender, but it’s more of an argument that, “I’ve been through the battles and I have scar tissues to prove it.” You say that maybe it takes someone who has been in the middle of these fights to stop them. I think emphasizing the scar tissues and her insider credentials, oddly enough, may be appealing.