Is the dream of Israel-Palestine peace dead?

As the conflict in Gaza ratchets up, it's clear the status quo can’t hold. But the idea of a peaceful resolution seems as remote as ever 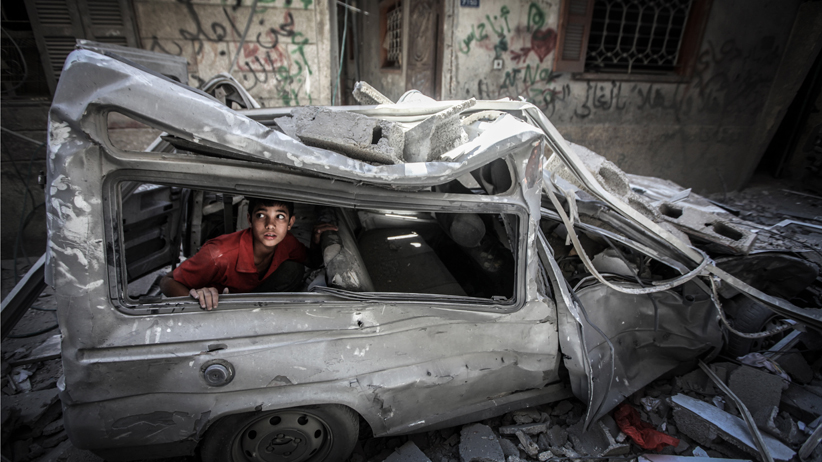 A Palestinian looks at debris and remains of cars after what police said was an Israeli air strike that destroyed a nearby house in Gaza City. (Majdi Fathi/Zumapress/Keystone)

It is often easy to forget, looking back at the ceremony and optimism that surrounded them, that the Oslo Accords were never meant to be more than a way station, a step on the road to something else.

In 1993 and 1995, the Israeli government and the Palestinian Liberation Organization signed agreements that resulted in some limited self-government for Palestinians in the Israeli-occupied West Bank and Gaza Strip, and set in motion a process geared toward an eventual peace treaty. The creation of a Palestinian state was not stipulated in these accords, but it was implied and understood that this is what the treaty would entail.

The accords envisioned a deal by 1999. Instead, two decades have passed with more negotiations but no treaty. Thousands have died, including at least 190 in Gaza in the last two weeks, according to Palestinian officials, as Israeli jets pound the Gaza Strip in response to Palestinian rocket fire targeting Israel. On Tuesday, an Israeli rabbi distributing food to soldiers near Gaza died as a result of a Palestinian mortar attack.

Israelis allege that current Palestinian leader Mahmoud Abbas doesn’t want his legacy to be a deal that would see Palestinians renounce a claim to most of the land they consider to be their historic home. They point to his Fatah movement’s recent reconciliation with the militant group Hamas as proof that he isn’t serious about making peace.

For Palestinians, nothing more forcefully demonstrates Israel’s true intentions to sabotage the birth of their country than the proliferation of Jewish settlers in the West Bank and East Jerusalem—land that will, in theory, make up a future Palestinian state. Since the Oslo Accords, the number of settlers has more than doubled, to at least half a million.

American President Barack Obama, like his predecessors, tried to break the impasse. Like them, he failed. Talks between Abbas and Israeli Prime Minister Benjamin Netanyahu collapsed in April, despite the intensive chaperoning efforts of Secretary of State John Kerry. Martin Indyk, America’s top envoy for the negotiations, stepped down last month. “We gave it everything we had, and we got nowhere,” he told a public audience in Colorado this month. Of Abbas and Netanyahu, he said: “There is no trust between them. Neither believes the other is serious.”

In theory, Indyk might be dispatched for another try. But why would he bother? Indyk’s answer, that the status quo is unsustainable, is true—but it’s always been true. Israel cannot be democratic and forever rule over Palestinians in the West Bank; it cannot be a state with a strong Jewish majority and grant those Palestinians citizenship.

For evidence of the poison that has soaked into both societies, one need look no further than the recent abduction and murder of three Jewish students, likely by Palestinian extremists; or to the Israelis who demanded vengeance, which came when a 16-year-old Palestinian was kidnapped and burned to death. Israel has arrested seven suspects, three of whom have confessed. According to Israeli press reports, at least six are ultra-Orthodox Jews and include three minors.

Since then, Hamas and other militant groups in the Gaza Strip have sent hundreds of rockets at Israeli towns and cities, including Tel Aviv and Jerusalem. Missiles Israel believe were supplied by Iran have struck deeper into Israel than ever before. Rockets have also been fired at Israel from southern Lebanon. Three million Israelis have been sent running to bomb shelters. Hamas says all Israelis are targets. Israel has responded with air strikes and has warned of a ground invasion.

But if the status quo cannot hold, launching another round of peace talks a year or two from now seems to recall the old adage that insanity is doing the same thing over and over again and expecting different results.

Instead, it may be useful to confront the possibility that the peace process, as launched by the Oslo Accords, is dead. Reaching a final agreement is not a matter of shifting the borders of a prospective Palestinian state a few kilometres this way or that. The goal, as Kerry put it when he convened negotiations last year, of “two states living side by side in peace and security,” is as distant now as it has been at any point over the last 20 years. And, if the so-called two-state solution is slipping away, where does that leave the Israelis and Palestinians who live in the land those states might have occupied? 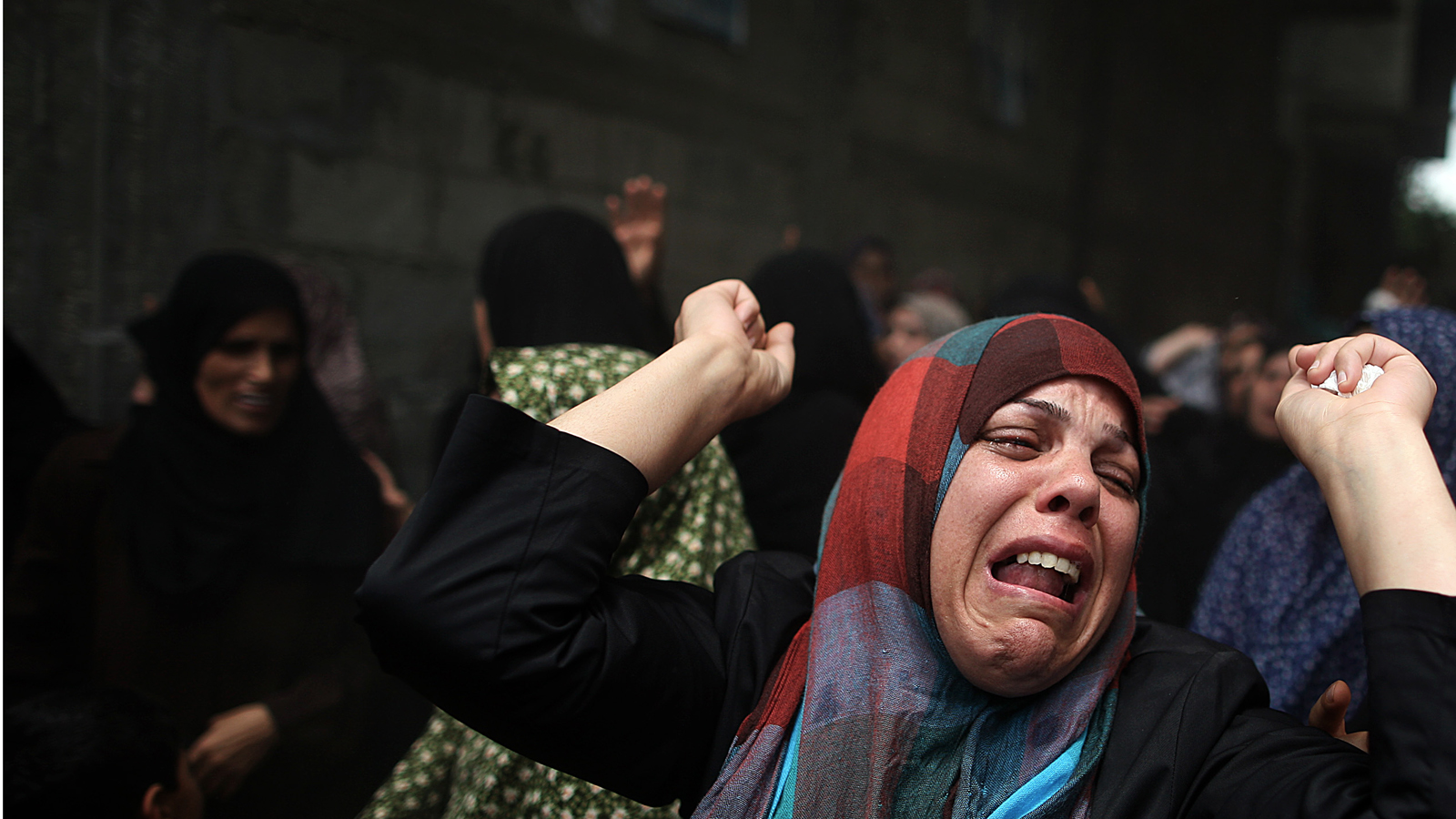 Thousands fled their homes in a Gaza town on Sunday after Israel warned them to leave ahead of threatened attacks on rocket-launching sites, on the sixth day of an offensive. (Ali Jadallah/Zumapress/Corbis)

Ali Jarbawi, a Palestinian professor and former politician, has described Israel’s settlement policy as an “entanglement”—not just for Palestinians, but for Israelis, as well. The more Israel colonizes the West Bank, the harder it will be to extricate the settlers who live there, and the more difficult it becomes to imagine a border that might one day separate one state from the other. Prefacing her comments by saying she is “sick of being politically correct,” Israeli Justice Minister Tzipi Livni recently called the settlements “a security, economic and moral burden that is aimed at preventing us from ever coming to an arrangement.”

Already, says Khaled Elgindy, a fellow at the Brookings Institution who has advised the Palestinian leadership on negotiations with Israel, the “Green Line” that divides Israel from the West Bank territory captured in 1967 is becoming increasingly irrelevant, as Israeli settlements in the West Bank expand and Israeli Arabs in Israel proper feel common cause with Palestinians in the occupied territories. “The Israelis have managed to erase the Green Line territorially. Meanwhile, Palestinians are erasing it demographically and psychologically,” says Elgindy. “So we’re already in this one-state reality, which could end up being a state in perpetual civil war or civil conflict.”

A so-called “one-state solution” is sometimes floated by Palestinians and some Israelis on the left as an alternative to the two-state solution that has been the ostensible goal of negotiations since Oslo. The idea would be the creation of a bi-national state in Israel, Gaza and the West Bank in which all citizens have equal rights. Most Israelis reject this, as Jews would become a minority, or close to one, in the new state. Indeed, fear of such an outcome has convinced some Israeli politicians who may not desire the creation of an independent Palestine to believe that one is necessary for the survival of Israel as a Jewish state.

Even setting aside the reservations most Israelis would have about inhabiting a new state with a much more diluted Jewish character, Elgindy says the prospects of such a state functioning are low. “It’s very hard to make the case for the one-state-solution now, when we’ve seen this really nasty violence between not just militants and soldiers, but, presumably, ordinary civilians. There is deep animosity, and it’s hard to imagine how, in the near future, you could convince Israelis and Palestinians to set aside their nationalism and exist in a new state as citizens of neither a Palestinian or an Israeli state,” he says. 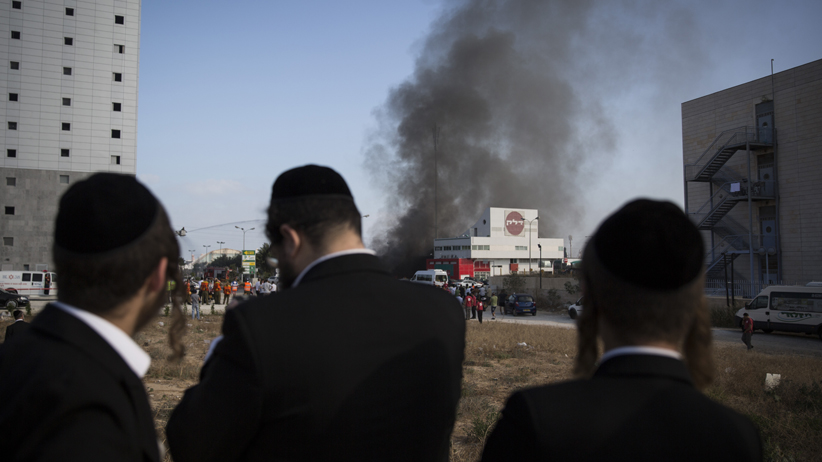 Ultra Orthodox Jews watch the smoke rising from a gas station in Ashdod. A rocket injured three people, one of them critically. About 400 rockets were fired from Gaza into Israel over the past three days. (Hadas Parush/Flash90/Redux)

There are other alternatives to a negotiated treaty resulting in two states. Naftali Bennett, whose party won nine per cent of votes in Israel’s last parliamentary election, campaigned on the assertion that a peace deal with the Palestinians would never happen. He proposed instead a “partial annexation” of the West Bank, in which Israel would take over part of the territory and grant Palestinians limited self government in the rest. Bennett now sits as economy minister in Netanyahu’s coalition government. Elgindy says there is no evidence Palestinians would ever accept such limited sovereignty, given their long history of agitation for full statehood.

Others have suggested a unilateral Israeli withdrawal from parts of the West Bank. Israel would evacuate some settlements, annex others, and draw new borders without negotiating the details with the Palestinians. But without a formal peace deal, such a plan would not garner much support from Israelis who would feel they are giving up territory and getting nothing in return.

A recent poll commissioned for the Israeli newspaper Ha’aretz found that 23 per cent of Israelis believe the creation of one state between the Jordan River and the Mediterranean Sea with “limited rights” for Palestinians would be best for Israel in the long run. Ha’aretz describes such an option as an “apartheid state.” According to Yezid Sayigh, a senior associate at the Carnegie Endowment for International Peace Middle East Center in Beirut, absent a peace deal that divides the land they occupy, Israel and the Palestinians are sliding toward this outcome anyway.

“Since Israel is the dominant power, since it controls everything on the ground, since it’s proceeding very proactively with a colonizing program in the West Bank and East Jerusalem, then, de facto, we are going to end up with two sets of people occupying the same physical space but subject to very different legal, administrative civic systems,” he says.

It wouldn’t be peaceful, and the undemocratic nature of such a state would undermine Israel’s international support. In 2007, then Israeli prime minister Ehud Olmert warned that, were the two-state option to collapse and lead to one state in which Palestinian rights were limited, even American Jewish organizations would turn against Israel. Israel would “face a South African-style struggle for equal voting rights,” he said at the time, “and, as soon as that happens, the state of Israel is finished.”

In short, there are abundant reasons for all parties to negotiate a division of the land they share. This month’s resumption of hostilities provides a few more, says Yossi Mekelberg, an associate fellow at Chatham House. “What you’ve seen in the last few weeks should be an incentive for everyone to go back to the negotiating table. If there are no negotiations, it leaves the vacuum for the radicals and the extremists to operate and push everyone to war, and maybe a third intifada. Politicians always have to look at the alternative. The alternative is what we see now.”

And yet, there is little urgency among the parties to try again. The U.S. is reluctant to pressure Israel. Abbas appears to be shifting toward a strategy of applying for Palestinian membership in global bodies, such as the International Criminal Court. The Ha’aretz poll revealed that 25 per cent of Israelis think “a continuation of the present situation” is Israel’s best long-term option. The status quo cannot go on. But it probably will.