Kamala, Joe and the video chat that could change history

Image of the Week: The scene of Biden's momentous call with his veep pick screams normalcy. Its implications are anything but. 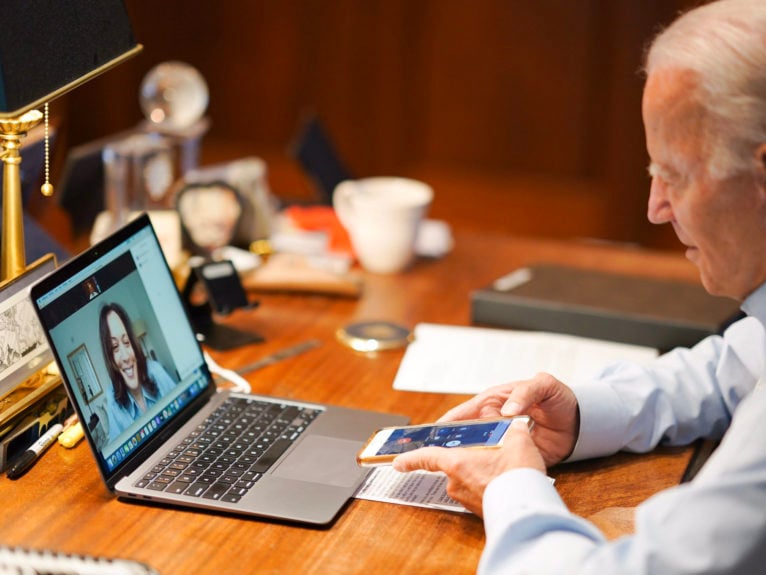 Joe Biden speaks with Kamala Harris during a video meeting in a photo posted by his campaign photographer. (Adam Schultz/Biden Campaign)

When presumptive Democratic presidential nominee Joe Biden informed Senator Kamala Harris on Tuesday that he wanted her to be his vice presidential candidate, it instantly became a historic moment in American politics. Not just because Harris is the first woman of colour to run on the ticket; nor because, specifically, she’s the first major-party candidate of South Asian or Caribbean descent; but also, simply, because it was the first time such a conversation has ever happened via video chat. We mere members of the public imagine these conversations as hushed, private, intimate—the stuff of dramatic Hollywood reenactments and long-game agendas playing out in candidates’ minds. Yet here we are, barely emerging from international lockdowns, offered a photographic glimpse into the absurd normalcy of two people sitting in their living rooms, having a monumentally significant chat. We are all but invited to zoom into the frame, squint and analyze every oddball feature of Joe Biden’s home office in Wilmington, Del. People scrutinized the manic number of apps permanently stickied to Biden’s computer dock; the Hagar the Horrible comic that helped him work through the loss of his wife, daughter and son; the odd overlapping use of both speakerphone and laptop; the script tucked under his computer. In a world where transparency, mass communication and interconnectedness have brought hyper-detailed analyses to the fore—where we sift through long reads, deep dives and hours of podcasts to navigate every corner of the globe—it’s refreshing to step back and look at the bigger picture. A woman of colour is on the ticket. They’ve got a good shot at winning. Let that soak in.