Poland's president on NATO, his critics and the burden of history 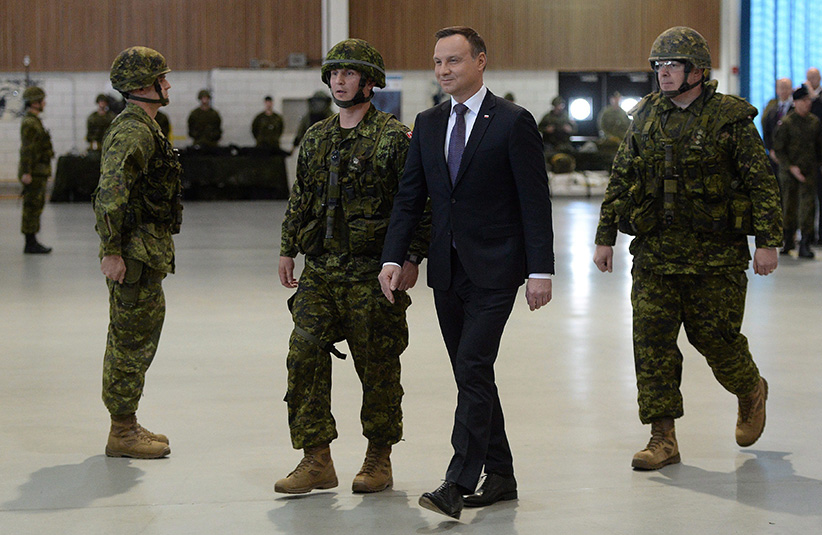 Polish President Andrzej Duda makes his way to take part in an inspection at Garrison Petawawa, Ont., on Tuesday, May 10, 2016. Duda was on the base to meet with Canadian Armed Forces personnel who participated in Operation REASSURANCE in Poland. (Sean Kilpatrick/CP)

Andrzej Duda, it turns out, gives as good as he gets. Poland’s president was in Toronto, Niagara-on-the-Lake and Ottawa this week to meet with business leaders, members of Canada’s substantial Polish diaspora—and Prime Minister Justin Trudeau, as both leaders prepare for the Warsaw NATO summit in July.

Duda’s visit was politically delicate for Ottawa’s Liberals. Trudeau and Foreign Minister Stéphane Dion are eager to reassert Canada’s support for Poland’s eastern neighbour Ukraine, and for Poland as a key ally in NATO and the EU. But Ottawa has kept abreast of a constant stream of critical Western coverage of Duda’s party, the socially conservative Law and Justice (whose Polish acronym is “PiS,”) which won both the presidency and a parliamentary majority in separate elections last year. Editorials and comments in interviews and opinion articles from such prominent Polophiles as Timothy Snyder and Norman Davies have criticized the new government for stacking public institutions, silencing critics, advancing a tendentious view of Polish and European history, and prosecuting internal grudges at the expense of Poland’s obligations within Europe and NATO.

In the end, the Trudeau government reached the same conclusion most of Poland’s European allies have reached: that while it can take a dim view of individual government decisions, Poland is too important to ostracize. Trudeau met with Duda, but they did not meet reporters together. Maclean’s requested an interview with Duda during his visit but was told he had time only to respond, in writing, to written questions submitted in advance. The questions were sent on Friday; the president’s answers arrived on Wednesday. Some of the questions were intended to provoke, and Duda was not shy in responding. Here is his exchange with Maclean’s:

Q: The NATO summit in Warsaw in July will be preoccupied with challenges on NATO’s southern border, including the migrant crisis. Do you worry that NATO is too worried about the south and has not paid enough attention to the east?

A: The Alliance must be based on the concept of solidarity and co-responsibility. That’s why there should be no division between the east and the south. Security cannot be divided. NATO must guarantee equal status to all its members and monitor all threats. The Warsaw summit should yield exactly such an outcome. We should forge a collective strategy for the east and the south, aimed at protecting the territory of all member states, protecting peace, protecting international law—no matter where the current threats come from. It means that the eastern flank should be strengthened through defence infrastructure and reconnaissance capabilities. Meanwhile the southern flank needs a clear mandate for common action. I am convinced the Warsaw summit will bring us some definitive answers in this respect.

Q: What are Poland’s specific military requests along NATO’s eastern border? Some reporters have suggested about 5,000 troops could be stationed in Poland and the Baltics, on a rotating basis. Would that be enough?

A: I have been saying repeatedly: specific quantities do not matter. NATO should demonstrate that it is capable of creating new forces which would protect its eastern flank. It would constitute an enormous change. NATO must show it is a living, vibrant alliance. The threat from the east is not temporary. International rules have been trampled on, the sanctity of borders have been violated. Therefore I want NATO’s presence in the eastern flank to be substantial and adequate, considering the level of insecurity in our region. Specific numbers and specific locations are still subject to negotiation. From our point of view having American, Canadian or British troops on a rotating basis in Poland and in the Baltics would be an enormous boon to our defence capabilities. Not only in terms of physical presence. Regular joint exercises mean higher level of combat readiness and better coordination in command­-and-­control. This is particularly important taking into account the changing face of modern battleground. There are new challenges NATO must adapt to: from hybrid activities to cyberwarfare.

Q: Elections produced two new governments in the fall of 2015: Justin Trudeau’s Liberal government in Canada, and a PiS parliamentary majority in Poland. Have you seen any change in Canada’s response to the Russian challenge in Ukraine, and toward NATO in general, since last autumn that are worth bringing to the public’s attention?

A: Canada and Poland should further their efforts to reinforce the Ukrainian democracy. There has been a string of Polish­-Canadian initiatives aimed at strengthening the civic society in Ukraine and improving the democratic process at the municipal level. Both Poland and Canada should be advocates of long-­lasting, peaceful solutions in eastern Ukraine, based on unconditional respect of international law. 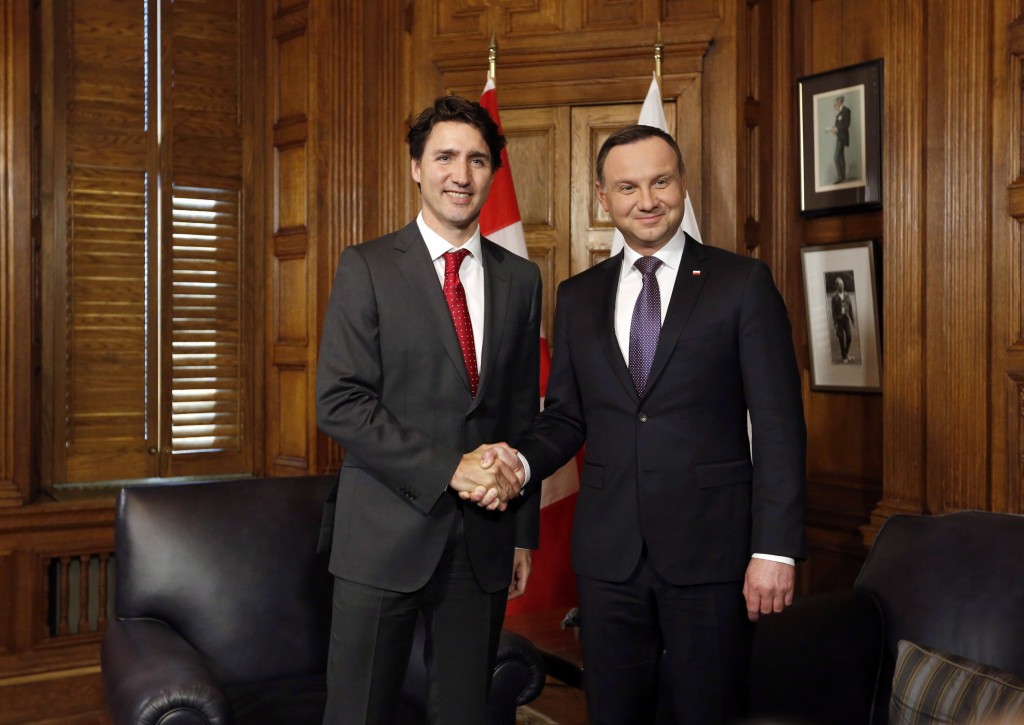 Q: The new PiS government has been controversial, not only in Poland. In April the European Parliament passed a motion saying it “is seriously concerned that the effective paralysis of the Constitutional Tribunal in Poland poses a danger to democracy, human rights and the rule of law.” Why does the PiS government not take the EU’s concerns seriously?

Q: While in Canada you will visit with many Polish-Canadians. What will you tell them about Poland’s decision to accept no more migrants from Syria and the surrounding region?

A: Poland is ready to admit every refugee who arrives in Poland, fleeing the war in the Middle East, no matter their faith or economic status, provided that they comply with our legal regulations and want to stay in our country. The point is that very few of them choose Poland as their final destination. That’s why we strongly oppose the relocation quotas and penalties that the European Commission is trying to impose on all member states. We cannot forcefully retain migrants in Poland. What if they wish to travel to Germany, Denmark or Sweden? What if they want to join their families in Hamburg or Malmö? Should we detain them? Restrain their freedoms? This policy is hardly “humanitarian.”

Q: Poland’s government is considering legislation that would make it a criminal offence to suggest Polish responsibility for the Holocaust. The Nazi regime’s murderous coercion of ordinary Poles is well known, as is the Polish people’s fierce resistance. But surely that resistance was not unanimous? Surely it should be acceptable for historians to examine the role individual Poles played during the war years, even if some contributed to the Nazi atrocities?

A: Over six thousand Poles are listed in the Yad Vashem Institute as the Righteous Among the Nations. Can you name at least one of them? Probably not. Their sacrifice was mostly anonymous. A few weeks ago I had the honour to participate in the opening ceremony of a museum in Markowa, in southern Poland, commemorating the martyrdom of the Ulma family. During the war they saved a Jewish family from extermination. And they paid for this heroic deed with their own lives. All members of the Ulma family were slaughtered by Germans. All eight of them, including small children. Is this story really so well-­known abroad? I don’t think so. The name “Markowa” doesn’t appear too frequently in foreign media, unlike the outrageous term “Polish death camps.” Do you know that in war­time Poland, as opposed to many other countries in Europe, the Germans were unable to install a puppet regime? Do you know that the Polish government in exile and the Polish Underground Army appealed for all Poles to help Jews, in spite of the fact that the people who hid their Jewish neighbours faced instant execution? The new government has no intention to sue historians who investigate Polish anti­-Semitism. Their books are not only “acceptable,” they are necessary to fully understand all intricacies of the common history of Poles and Jews. Alas, for many years, we have witnessed a process of shifting blame for the Holocaust on others. No, we were not responsible for the Holocaust. The German Nazi regime was. Full stop.

Q: PiS governments have been preoccupied with establishing that many Poles, still alive, collaborated with the Communists during the Cold War. How could their collaboration with an authoritarian regime cause them public blame, while an earlier generation’s interaction with an earlier oppressor, the Nazis, becomes a forbidden topic of historical investigation? This looks like a serious double standard.

A: No, it doesn’t. As I said before, there was no Polish puppet regime steered by Germans during the war. Acts of anti­-Semitism and atrocities committed by individuals were unacceptable but rare. But we have admitted the truth. We have recognized the fact that some Poles behaved hideously under occupation. Conversely, most communist apparatchiks were neither prosecuted nor officially condemned for what they did in the ’50s or in the ’80s. After the fall of communism many of them lived unmolested in their villas, cashing in hefty pensions. And many Poles who collaborated with the regime continued their careers in academia, business, politics. Can you spot the difference? I’ll give you one telling example. When Mr. Jan Tomasz Gross’s books about Polish anti-­Semitism were published in Warsaw, they were widely acclaimed by liberal critics. Meanwhile historians who were trying to describe the involvement of current elites in the communist system of oppression were ostentatiously discredited and ostracized. Yes, double standards were applied in Poland, but the other way round.