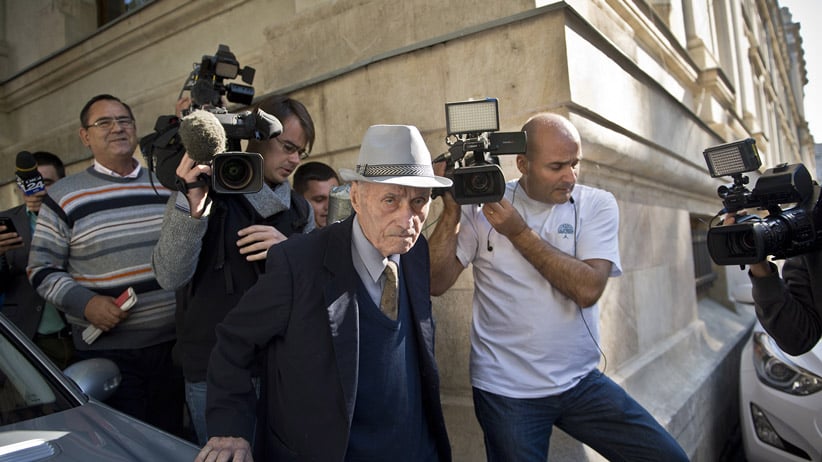 Last week, an 89-year-old man named Alexandru Visinescu appeared before a court in Bucharest, Romania, to face charges of crimes against humanity. The alleged crimes date back to between 1956 and 1963, when Visinescu served as commandant of the Ramnicu Sarat prison—a notoriously brutal apparatus of the Romanian Communist state. On Wednesday, the frail old man hardly looked the part; he sat quietly in the courtroom, wearing a hat and a three-piece blue suit.

In Bucharest, the event is already being hailed as a “Romanian Nuremberg”—for it marks the first trial of its kind against a former leader of the Communist state’s prison system. “This trial is particularly important, because for the first time an instrument of Communist terror will face justice,” said investigator Radu Preda.

Historians estimate that some 617,000 Romanians were locked up by Communist authorities between 1947 and 1989; about one in five died behind bars. Ramnicu Sarat was known as “the prison of silence” because detainees—many of them famed intellectuals, dissidents and priests—were held in solitary confinement and not permitted to speak.

Prosecutors accuse Visinescu of “submit[ting] the political detainees to conditions designed to destroy them . . . a slow and effective process during which they were mentally and physically tortured.” Nicoleta Eremia, the widow of a former Ramnicu Sarat prisoner who is seeking $140,000 in financial damages, says that her husband was imprisoned for three years for writing a satirical book that criticized Communist leaders, and that he left prison barely able to walk, after being forced to stand in ice water for hours on end. Visinescu denies these charges.

The trial was a long time in coming. A quarter-century ago, on Christmas Day, Romania’s long-serving dictator Nicolae Ceausescu and his wife were shot by a firing squad following a slap-dash summary trial. With this, the last of the Warsaw Pact dictators to be overthrown in 1989 met his fate. Days earlier, amidst mounting anti-regime protest, Ceausescu had addressed thousands of Romanian workers from the balcony of the Central Committee building. The now-infamous speech—and the startled face of the dictator when the jeering crowds turned against him—was captured on video and became a symbol of Communist Europe’s demise.

Since then, Romania has had difficulty facing up to its past. Very few Romanian Communist leaders faced trial. Indeed, many officials who served under Ceausescu went on to assume new positions of power in the ’90s. Adrian Cioroianu, dean of history at the University of Bucharest, thinks his country’s reticence is rooted in the way Romanian history was written after 1989: “Nicolae and Elena Ceausescu were used as scapegoats for all the layers of the party.”

In recent years, the sticky legacy of the Securitate—Ceausescu’s omnipotent secret police service—has come to bear on Bucharest. Historians estimate that by the ’80s, about one in 30 Romanians worked as Securitate informers. In 1999, the first Securitate archives—over two million surveillance files, occupying miles of shelf space—were opened up to those who had been targets of state spying. In 2007, the files were turned over to an independent National Council for the Study of the Securitate Archives, which is now scouring the collection for incriminating evidence, and investigating sitting officials for signs of Securitate collaboration.

In 2006, Romania made its first moves toward prosecuting former Communist officials. That year, the Institute for the Investigation of Communist Crimes and Memory of the Romanian Exile (IICCMRE) was founded in Bucharest and began researching historical crimes, in some instances by exhuming old graves. Last year, the IICCMRE approached state prosecutors with a list of 35 former officials, reportedly ranging in age from 81 to 99. Visinescu’s trial (which has been adjourned until late October) will be the first, but almost surely not the last. “In principle, I do not approve of a ‘witch hunt,’ ” says IICCMRE’s Preda. But “evil has a face. Without actual trials, with actual people, we risk transforming Communism into a natural phenomenon.”

The “Romanian Nuremberg” title attached to the case is not exactly fitting. The Nuremberg trials, after all, directly followed the Second World War and brought the highest-ranking Nazi figures to justice, en masse, before an international tribunal. But the proceedings do resemble ongoing trials of aging Nazi officials, both in language and in tone. In both instances, the grave nature of the alleged crimes stands in breathtaking contrast to the withered old men accused of committing them. The defendants’ pleas also borrow from the same book; Visinescu argues he is guilty only of “following my superiors’ orders.”

Today, only one former inmate of the Ramnicu Sarat prison survives to see his former captor brought to justice. Valentin Cristea says he was incarcerated in 1956 for “divulging state secrets” to the anti-Communist resistance. He reportedly spent seven years in the prison camp. Recently, Cristea told reporters he thought Visinescu’s trial was an important landmark—but that he could not bear to watch it.