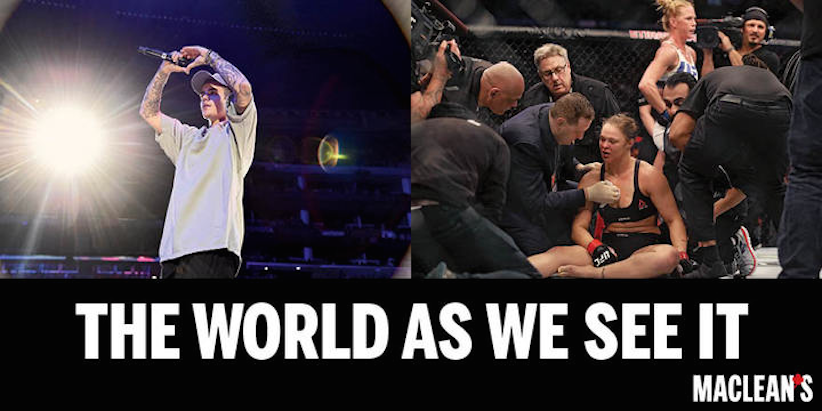 The Canadian government has dropped the appeal of a court decision permitting women to wear the niqab at citizenship ceremonies. The appeal had been requested by the Conservatives, who argued that it was un-Canadian but then lost the election partly because of their attempts to make cultural values a wedge issue. Zunera Ishaq, the Ontario woman at the centre of the case, had agreed to reveal her face to citizenship officials but not in public. And so an issue that should never have been an issue is no longer an issue.

Mohammed Emwazi—the hooded, knife-wielding British extremist known as “Jihadi John,” who appeared in several gruesome beheading videos made by the so-called Islamic State, and who has been described as a “human animal”—is believed to have been killed last week. U.S. military officials say there’s a “high degree of certainty” an American drone made a direct hit on him as he climbed into a car in the Syrian city of Raqqa, ending a year-long manhunt. Though killing Emwazi has little tactical value, other than throwing a wrench in the extremists’ propaganda machine, it nevertheless sends an important message: given enough time, the global forces fighting the murderous Islamic State will prevail.

3. Score one for road hockey in Toronto.

Road hockey is played joyously by Canadian children, remembered fondly by their parents and long banned from the streets of Toronto. (Punishment perhaps for being home to the Toronto Maple Leafs?) But this week, Toronto city council unanimously passed a motion to study the possibility of allowing hockey (and basketball) nets to be erected at the road’s edge, away from traffic, in neighbourhoods with no sidewalks to block. City lawyers will smother the idea, of course. But it’s still heartwarming to see squabbling politicians in Canada’s biggest city, patriotic Canadians all of them, trying desperately to govern with a modicum of common sense.

Avocados can be a frustrating fruit, turning from firm and tasteless to brown and mushy before buyers can say “guacamole.” Luckily, Tesco, a U.K.-based grocery retailer, has launched a new product: packaged frozen avocado. Much like frozen berries, the avocados come ready to eat—skinned and pitted­­—for $5 per 500-g package. For extreme avocado fanatics, Tesco also sells a super-sized version of the fruit dubbed the “avozilla.”

Manitoba chiefs could end up suing Prime Minister Justin Trudeau if he breaks a campaign promise to end boil-water advisories for First Nations communities within five years. After decades of foot-dragging by Ottawa, the chiefs say they’re preparing for legal action in case 2020 arrives and they’re still grappling with bacteria-ridden water and poor sanitation services. The suit, which would mirror one launched in Alberta last year, could be based on the Charter or a section of the 1982 Constitution Act that says governments should provide “essential public services of reasonable quality to all Canadians.” Regardless, the facts are this: nobody should have to wait years for a glass of tap water that’s safe to drink.

Health Canada has accepted “weak evidence” about the safety and efficacy of products making general health claims, according to an investigation by The Fifth Estate airing this week. More than 90 per cent of applications to sell new natural health products are approved, sometimes within 10 days, and under minimal review. Meanwhile, the FDA recently encouraged Americans to submit suggestions for the definition of “natural” on labels. It has never considered whether the term “should describe any nutritional or other health benefit.” Warning: buyers beware.

7. Catalonia pushes ahead with plan to split Spain.

Catalonia, a region of 7.5 million people in northeastern Spain, is pushing ahead to form its own republic. Spanish Prime Minister Mariano Rajoy has declared the secession unconstitutional and the region’s acting prime minister a criminal. Yet, since winning a majority government last week, the Catalan nationalist party has begun writing its constitution anyway. Rajoy isn’t the only one outraged. Thousands of businesses in Catalonia plan to leave or, in some cases, have already left.

The copyright on the diary of Anne Frank was set to end on Jan. 1, 2016, which would leave all publishers free to produce new copies. So the Swiss foundation that owns the copyright has extended it to 2050 by adding Frank’s father, Otto, as a co-author. “Can censoring passages of an existing book be regarded as the creation of a new work?” asked one French critic. Critics say the move casts doubt, unnecessarily, on the book’s true authorship. Commercial instincts have surely no business interfering in one of history’s most tragic tales.