The end of what's left of the Canadian Alliance

The Canadian Alliance had lived on by name and logo thanks to Mexico's Nueva Alianza. This week, that party too will cease to exist. 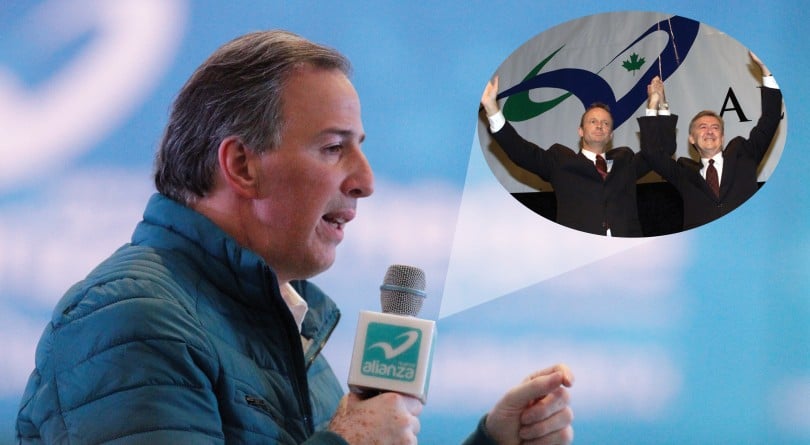 Mexicans often speak of their political system as surreal, and among its more surreal aspects in recent years is a political party calling itself Nueva Alianza (New Alliance,) which stole its name and logo from the defunct Canadian Alliance.

Like its Canadian namesake, Nueva Alianza is about to go defunct, having failed to win enough votes in the July 1 election to maintain its registration. Mexico’s electoral institute is expected to declare the party dead on Wednesday.

Nueva Alianza will slip away after causing its share of comedy and controversy—and generating some curious coincidences. Its 2012 candidate Gabriel Quadri even wore a wetsuit to his campaign kickoff, reminiscent of Canadian Alliance leader Stockwell Day’s arriving at a press conference in 2000 on a personal watercraft.

Mostly, though, Nueva Alianza was known for the person who controlled it: former teachers’ union boss Elba Esther Gordillo—a feared political organizer, who’s lampooned on social media as Chucky, the doll from the horror flicks. Known as La Maestra, Gordillo was arrested in February 2013 as she stepped off a private plane and imprisoned for allegedly misappropriating union money to finance a limousine lifestyle.

Gordillo was found not guilty of organized crime and money laundering charges earlier last month—at the same time as Nueva Alianza exhausted its appeals and appeared set to disappear.

Her legal fate also was announced the same day as Andrés Manuel López Obrador (commonly called AMLO) was declared president-elect on Aug. 8, sparking rumours of a deal or dirty politics on the part of the outgoing government (something all sides deny).

While her party fades, her influence in Mexican politics continues. Defiant and wearing thick makeup, Gordillo, 72, reappeared in public late last month. At a rowdy press event in a posh hotel, she promised to reassert the 1.6-million member teachers’ union’s outsized role in public education policy. And, in impeccable timing, her reappearance came the same day Mexican kids returned to school.

“Nothing is a coincidence with Elba Esther,” said Valería Moy, director of México ¿Comó Vamos?, a think tank.

Gordillo had opposed an education reform proposed by President Enrique Peña Nieto in 2013 and scuttled a deal to support his Institutional Revolutionary Party (PRI) the year before.

Her return also rudely reminded Mexicans of the rampant impunity in a country where corruption mostly goes unpunished and those pursued appear targeted for political reasons.

Imprisoning Gordillo was supposed to send a message that Mexico was changing as Peña Nieto promoted structural reforms in energy, the economy and education. But Peña Nieto became bogged down by corruption scandals and stained by incompetence. It was later revealed the government spent more on communications promoting the education reform than it did on teacher training in 2017.

Gordillo loyalists, meanwhile, have returned to doing what they do best: organizing. Loyalists have already started initiatives to return Gordillo to the leadership of the teachers’ union. And Gordillo has promised to fight the education reform. She’s even winning some sympathy.

“Last year she was demonized,” Moy said. “Now everyone is talking about her as a victim of the system, but she is the system. She embodies everything that is wrong with education in Mexico and yet she’s free and the education reform is going in the trash can.”

Gordillo is likely to start another political party, too. But it’s unlikely to carry the “alliance” name and logo.