On the current violence, the murder of teenager Mohammed Abu Khdeir, and how the conflict may one day end 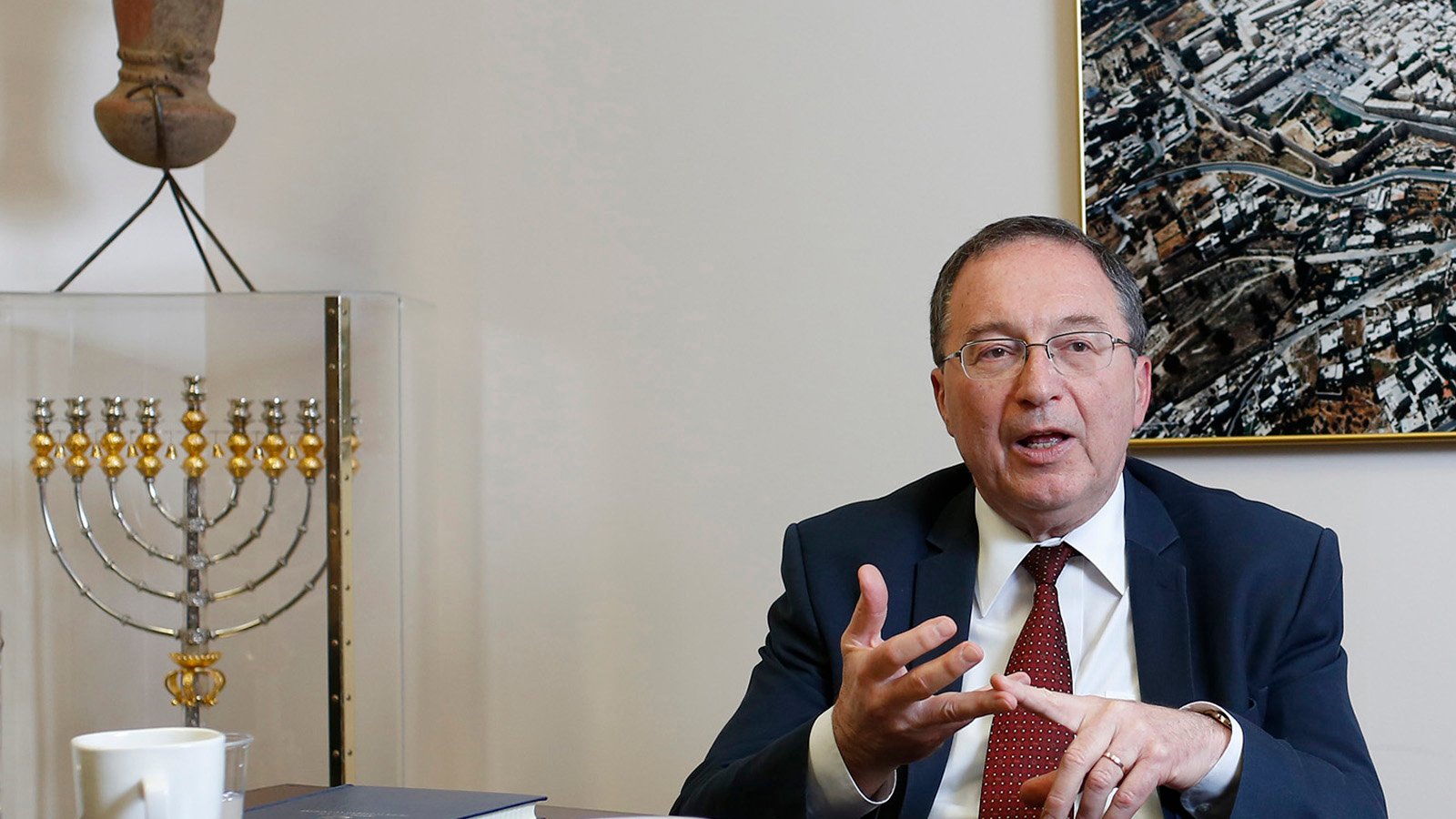 Relations between Israel and the Palestinians spiralled downward this month, following the murders of three Israeli students by Palestinians, and an apparent revenge lynching of a Palestinian teenager by Israeli Jews. In recent weeks, Israel and Hamas militants in the Gaza Strip have exchanged rocket and mortar fire and airstrikes, resulting in the deaths of at least 190 Palestinians and one Israeli. Israel’s ambassador to Canada, Rafael Barak, is a longtime diplomat who took part in the Oslo Peace Process 20 years ago.

Q: What is Israel hoping to achieve with its attacks on Gaza?

A: We’d like to achieve quiet for our citizens. We don’t have any intentions to uproot Hamas from Gaza. We’d like to finalize this operation with sufficient deterrence that it will enable our citizens to live in peace.

Q: It’s not working, clearly. After more than 1,000 strikes, Hamas and other groups are still sending rockets into Israel, including some of the longest-range missiles they’ve ever used. This follows previous attempts to establish deterrence with operations in 2008 and 2012. The capabilities of Hamas keep increasing.

A: It’s working. It takes time. We feel that day after day Hamas is getting convinced that this should be the end of the story. They feel pretty alone. Hamas is in a very difficult situation. They don’t have the Muslim Brotherhood in Egypt. They don’t have the ability to pay salaries. The Arab countries leave them alone. The only one that is supporting them is Iran. They are using their citizens as a shield. The large majority of Hamas leaders are now under cover, three or four metres underground. They don’t have this picture of success they are looking for. The moment the leaders come out and have to confront this population, they will be in trouble.

Q: The United Nations has estimated that 77 per cent of fatalities in Gaza are civilians.

A: We feel that two-thirds of those who are hit are terrorists. This is according to the numbers that we have.

Q: Do you consider that ratio acceptable?

A: Each civilian that is hurt or killed is something we regret. But compared with other military operations in the world, we think there is something exceptional in the way we are proceeding. We are taking serious precautions. I’m sure you know of the “knocking on the door” policy [hitting targets with non-lethal bombs as a warning]. I don’t know of any other army that is using this to give advance notice to those who can be hurt.

Q: This latest round of violence began with the kidnapping and murder of three Israeli students: Naftali Fraenkel, Gil-Ad Shaer and Eyal Yifrah. Israeli Prime Minister Benjamin Netanyahu quickly said Hamas was responsible and Hamas would pay. What evidence does Israel have that Hamas as an organization had a role in this crime?

A: We know who these kidnappers are. We have been following them for a long time. I assume that my intelligence services have good background on that. Maybe one day everything will be public. We have avoided 43 kidnapping attempts of Israelis on the ground. Read what Hamas has said. They have a manual on how to kidnap Israelis. This was written well in advance. This is the way Hamas works. It is a terrorist organization. It is not a regular army where you will see instructions and signatures.

Q: As part of the response to those murders, Israel arrested at least 350 Palestinians. At least five Palestinians were killed in those sweeps. Human Rights Watch said some of the arrests were arbitrary and in total the actions amounted to collective punishment.

A: In the West Bank we are looking for terrorism. These activities have been pursued not only by us, but jointly with the Palestinian Authority. The threat of Hamas is not only a threat for Israel but also for all Palestinians in the West Bank. I feel that each democratic government will react in the same way. Those arrested are not in our jails or interrogated because of very superficial reasons. There is a legal procedure. There are always ways—even the Supreme Court of Israel—that Palestinians can appeal in their claim for justice.

Q: How many people did Israel arrest after the murder of Mohammed Abu Khdeir?

A: According to what I heard, six. [A seventh suspect was arrested on Tuesday, after this interview.]

Q: Why the discrepancy? Why 350 Palestinians and six Israelis?

A: We are a democracy. The rule of law prevails. We found the perpetrators. I’m sure that those who are involved will be brought to trial and everything will be transparent. As an Israeli—besides the fact that this is a terrible crime that I condemn—I’m very happy that we have a judicial system that is so effective and a police system that can find the perpetrators. I hope that we will also find those who assassinated the three teenagers.

Q: There was a lot of public outrage and calls for revenge among Israelis following the murder of the three teenagers—crowds shouting “Death to Arabs!” and accosting people, looking for those with Arab accents. Do Israeli political or religious leaders have any responsibility for contributing to that climate of revenge and hate?

A: The president, the incumbent president, the government, rabbis, everyone condemned [Abu Khdeir’s murder]. It’s something that shouldn’t have been committed. But I think the feeling of Israelis vis-à-vis this crime is totally united. All the country, everybody condemns it.

Q: Israeli Knesset member Ayelet Shaked recently posted a quote on Facebook that she attributes to someone else but calls relevant to the current situation. It says the mothers of martyred terrorists need to follow them to hell and the homes where these mothers raised their “snakes” need to be destroyed: “Otherwise little snakes grow more.” She belongs to a party that is part of Israel’s coalition government. What sort of message does this send?

Q: But some in Israel, including, for example, Or Kashti, education analyst for the newspaper Ha’aretz, refers to a “racist cancer” infecting Israeli schools where students learn it is possible and maybe necessary to wipe out the other. Is the Israeli education system really as universally life-affirming as you describe it?

A: My kids have been educated in Israel, so I have my own experience. Israel is an open society. In each and every issue there are questions raised. This is positive, this introspection. Looking to see if we are okay and if there are things that need to be improved is part of our strength. We are all these voices. Myself, I’m convinced that in Israel kids are educated to love everybody, not kill everybody. Unfortunately in the Middle East, this is not the way that others are educated.

Q: The most recent round of peace talks between Israel and the Palestinians broke down. You were intimately involved in the Oslo Peace Process that started negotiations aimed at an eventual two-state solution. Do you think that goal is still achievable?

A: I strongly believe yes. Two-thirds of the Israeli public still feels this is the best solution, is the only solution that can work at the end of the day. But we are facing a situation in which part of the Palestinians are not accepting any solution. On the other hand you have a group, particularly in the West Bank, that is more open to dialogue. So those who are fighting us, we are fighting. Those who are open to dialogue, we continue to dialogue.

A: Those who have been involved know to what extent we are truthfully interested in finalizing this agreement. My prime minister applied the necessary steps to push forward this round of negotiations. Unfortunately we don’t have a partner on the other side. Mahmoud Abbas, I don’t know if he doesn’t want, or is not strong enough, or he doesn’t feel comfortable enough to make the concessions and come to a conclusion.

Q: How do you expect this current round of violence will end?

A: I know how things work. You find a lot of countries, some of them with very good intentions, trying to be the go-between. This goes on behind the scenes. And at the end, you engage. There is give and take. I’m sure negotiations will take place some time.

Q: And in two years you do it all again?

A: I hope not. But in the Middle East, from time to time the better solution is to postpone a problem, because to solve it remains very difficult. We are living in a country that is challenged since its creation as a state. We have been challenged by other countries. We have been challenged by terrorism. Despite this, we are living in a schizophrenic situation. On the one hand, we try to cope with this threat. On the other, we try to live a normal life. This is Israel in a nutshell.