Poland’s Foreign Minister on Russian aggression, national minorities, and why all of Europe should be concerned 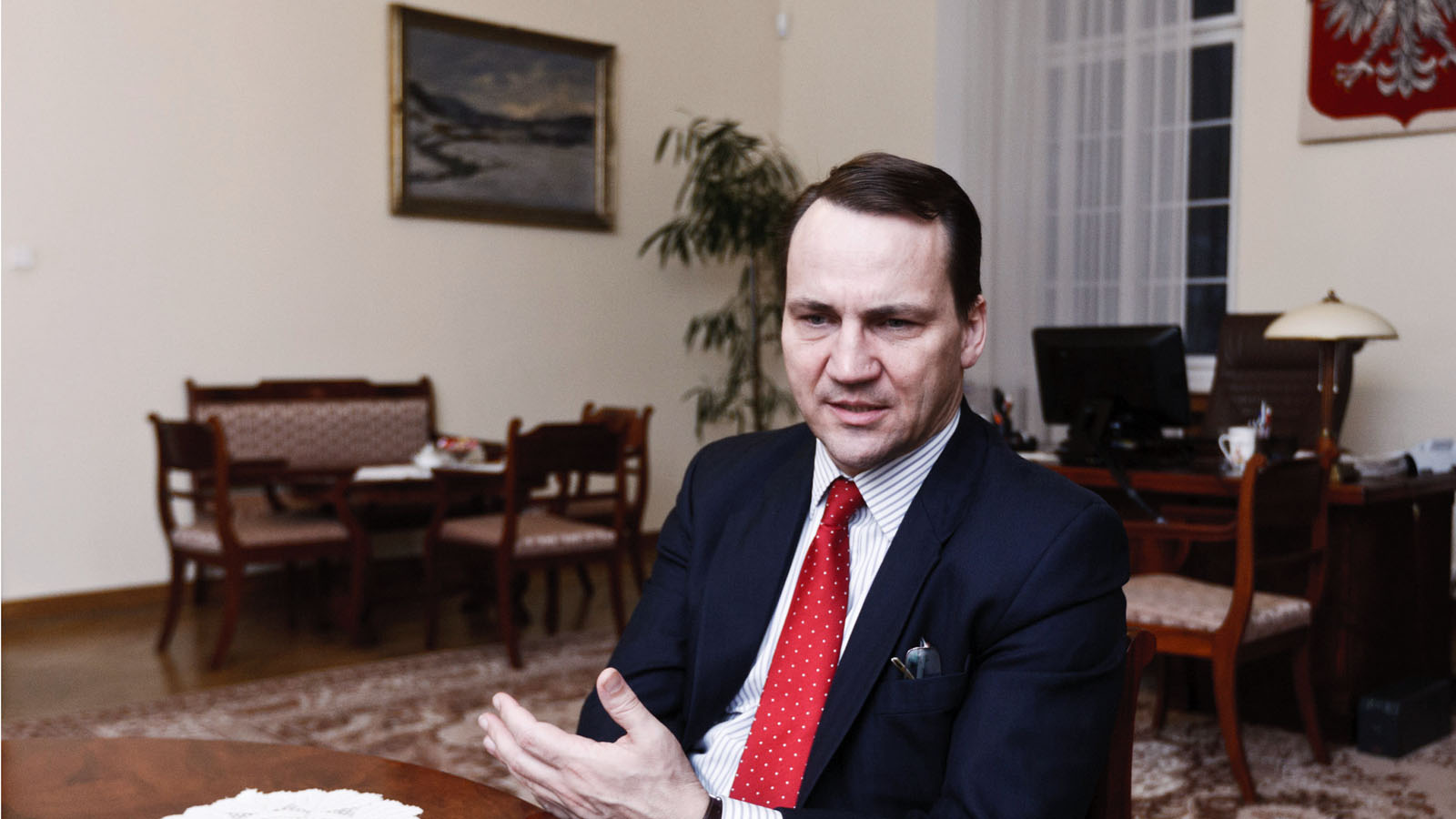 Radoslaw Sikorski, Poland’s foreign minister, is intensely preoccupied with events in Ukraine. A former foreign correspondent who is married to the Washington Post columnist Anne Applebaum, Sikorski is one of the most popular politicians in Poland. He sat for an interview with Maclean’s in Warsaw shortly before meeting with Canada’s foreign minister, John Baird.

Q: What do you think is happening right now?

A: Well, the Geneva accord [of April 17, between Russia, Ukraine’s provisional government and the EU] envisaged the disarming of illegal armed groups on both sides. From what I can see, the barricades in Kyiv are being dismantled, but there is no reciprocal movement in eastern Ukraine.

Q: How concerned is Poland?

A: Poland is the only country that is a neighbour to both Russia and Ukraine, and one of the highest proportions of our trade is with Russia. So yes, we are very concerned.

Q: Are you most concerned about where this could be headed?

A: We remember our own history. Russia has used the pretext of coming to the rescue of her compatriots many times before, in the partitions of Poland in the 18th century, and then under the Hitler-Stalin pact of 1939.

Q: Do you consider Russia a threat to Poland today?

A: All of Europe should be concerned because every European country has national minorities, and we have learned over the 20th century that changing borders by force to protect them leads to hell. The spearheads of Russia’s action in eastern Ukraine seem to be some very unpleasant people, using anti-Semitism, taking it out on the Roma—this kind of old-fashioned chauvinism we thought was a thing of the past.

Q: It seems we’re in a period of asymmetrical provocation and response. They send 600 men with balaclavas to stand at town halls, and Canada sends six F18s that surely no one expects to be used. Isn’t the range of options actually quite limited?

A: Look, we don’t expect to be threatened any time soon. Russia is very cleverly using the vulnerabilities of a weakened Ukrainian state to gain objectives with the minimum use of force. But Putin’s new doctrine [of] self-given right to protect Russian speakers abroad has to be of concern to places like Latvia and Lithuania, who are NATO members and neighbours. Fifteen years ago, [when] we were being admitted to NATO, there was a lively debate about what kind of forces would be put on the territory of new members. Russia argued that it shouldn’t be more than a heavy brigade with logistics and backup. On the NATO side, people were more inclined to think two heavy brigades. What actually happened was that nothing was deployed.

Q: You say you don’t see a military threat to Poland, but you also ask for the deployment of two brigades there.

A: Before doing something for Ukraine, or while doing something for Ukraine, we should ﬁrm up the red line that is treaty-based, namely, that NATO territory is sacrosanct, out of bounds for post-Soviet or neo-imperial irredentism. We need to belatedly make NATO security guarantees credible. What President Putin has done, first in Georgia and now more forcefully in Ukraine, is test the validity of our security guarantees. In other words, we may no longer assume that we can give out insurance policies with the secure knowledge that they will not be called upon.

Q: If you firm up the inviolability of NATO territory, you make very clear who’s not in NATO. That raises the embarrassing question of whether Ukraine is fair game.

A: But without doing that, you might be sending the message that Poland is fair game. We need to show that central Europe’s NATO membership is not only political, but also military. It is surprising that control of land has again become such an object of desire. We thought we learned that you can make a successful country without taking land from your neighbours. Russia is the last country on Earth that should need more land.

Q: President Obama says there are new sanctions teed up. What do you think the response should be if Russia does send troops to the Donetsk region, as was recently hinted?

A: If Russia does go in, we will reluctantly have to impose further sanctions. I say reluctantly, because I know it will be politically and economically painful for Poland, more so than for Canada; I mean, incomparably more. But I still think Russia underestimates how integrated she already is with the global economy, and how the sources of her wealth depend on trade and goodwill, particularly of Europe.

Q: They’re racing to diversify eastward: forgiving North Korean debt so they can run pipeline through North Korea, and cutting infrastructure deals with other Asian countries.

A: No one will pay them the kind of price for gas that we pay. Poland pays $400 [per 1,000 cubic metres]; I understand they’re haggling with the Chinese at about $260—and you still have to build the infrastructure. But every country’s free to shoot itself in the foot.

Q: The recent current of Polish history is to make friends with old enemies; you’ve done it with Germany.

A: We really tried to do it with Russia, and there was progress. Actually, President Putin was the agent of that progress. He came to the 70th anniversary of the start of the Second World War in Gdansk, which is acknowledging that [the war] didn’t start with the Nazi attack on Russia. We created a committee on difficult issues that brought Polish and Russian historians together to establish the facts of history. On the practical level, we established a local border-trafﬁc agreement, whereby three million Poles and Russians could travel without visas, and it’s a booming regional relationship, and our trade went up exponentially. Russia has tried to involve us in this crisis with Ukraine. The leader of the Duma hinted that Russia might be willing to give five provinces of the Ukraine to Poland. Other people have invited us to be co-supervisors of the issue of ethnic minorities in Ukraine. But we don’t accept that ethnic minorities were being targeted in Ukraine. They are being targeted now—in eastern Ukraine—by the separatists.

Q: One almost gets the impression Putin doesn’t think Ukraine is a real country.

A: Well, that’s the difficult bit, because every country has borders with accidents of history, and that includes both Russia and Ukraine. So it’s not enough to say that Crimea was given to Ukraine under the Soviet Union, therefore, it’s not really valid. You can’t just wipe the slate clean.

Q: I want to ask about your appreciation of Canada’s role in all of this.

A: My impression is that Canada has been one of the more principled countries in the conflict. I ascribe it to the fact that you are also neighbours to Russia, and therefore concerned about its state ideology. You also have a strong Ukrainian minority who escaped to Canada during previous waves of oppression. You are also one of the pillars of NATO and have the looming need to adjudicate rights in the Arctic Ocean. That might have something to do with it, too.

Q: The Russian position has been that the way to avert bloodshed is to redefine Ukraine with a new federal constitution. Is there merit to that?

A: Post-Soviet states, particularly presidential ones, are over-centralized. [This is] certainly true of both Ukraine and Russia. Russia is technically a federation, but she abolished the direct election of governors a while ago—so both countries could do with decentralization, whether you call it federalism or not. But yes, citizens need a deal between the central government and localities, particularly where there are national minorities, over language rights or the share of tax income. We are advising Ukraine on how to do it, taking the rather successful Polish example as a model. I think they’re going to do it anyway, but it should be done, because that’s what they need. One country imposing a constitution on another is the definition of colonialism.

Q: Was there something the West did wrong in its relationship to Russia?

A: I think we did miss a lot of warning signs. The doctrine Russia formulated, under which she gave herself the right to intervene in other countries on behalf of Russian speakers, was promulgated officially by president [Dmitry] Medvedev in 2008, and it’s part of their official security doctrine. We ignored all that, thinking that they couldn’t be serious.

Q: What can the West do now?

A: We should play to our strengths. Our strengths are that Russia needs our money more than we need their oil and gas. We have other supplies like Canada, like Norway, that give us a more competitive price with no strings attached.

Q: Is there opportunity in this for Canada?

A: Absolutely. I think you have the first liquid natural gas terminal capable of exporting gas to other markets, including Europe. We should welcome every development that allows democracies to create more energy and, thereby, makes us less dependent on autocracies.