Terry Glavin: Jagmeet Singh has lost the message on a key foreign-affairs question to an assortment of activist groups, posturing MPs and ghosts of the New Democrat past 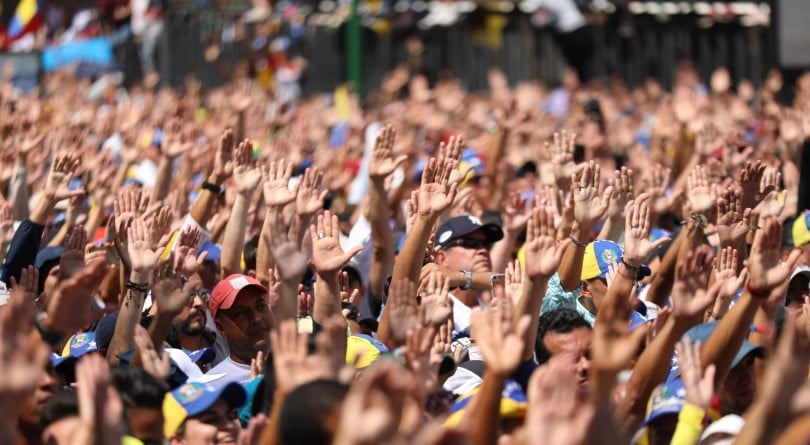 Supporters take an oath during the speech in Caracas by Juan Guaidó, who's been recognized by numerous countries, including Canada and the interim leader of Venezuela; Guaidó spoke during a march against the regime of Nicolas Maduro. (CP/EPA/Miguel Gutierrez)

It was probably inevitable, given the New Democratic Party’s chronic and debilitating habit of subcontracting policy on any number of vexing foreign-affairs questions to groupuscules of undead church-basement pamphleteers who haven’t managed to articulate a single original thought since the 1970s.

Or maybe it wasn’t inevitable. It’s not as though the party’s foreign-affairs critic, Hélène Laverdière, is an idiot. The object of an internal NDP “Hands Off Venezuela” motion to have her fired from her shadow-cabinet post more than a year ago, Laverdière has tried to enforce a bit of discipline, at least. But despite her efforts, on the serious question of how the world’s democracies might rescue the people of Venezuela from the bloody and devastating depredations of the gangster-caudillo regime of Nicolas Maduro, the NDP has made a laughing stock of itself.

This is an urgent bit of business, owing to Foreign Affairs Minister Chrystia Freeland’s leadership in the 15-nation Lima Group of anti-Chavismo nations. Another 35 countries have signed on to the outlines of Freeland’s formulation, which involves the isolation and encirclement of Maduro and the recognition of Juan Guaidó, president of Venezuela’s National Assembly, as Venezuela’s de-facto interim leader, pending new elections.

Coming out of several weeks of intense diplomatic mobilization across Europe and Latin America, Freeland has never looked better, tougher or smarter. Her adept marshalling of the emerging consensus among the world’s democracies—although it still may have come too late to avert something approaching a civil war—is a much bigger deal than has been generally acknowledged. And not just because Prime Minister Justin Trudeau has been gifted with a rare and perhaps singular foreign-policy triumph. This is a crucial test of the capacity of democracies to shift a rampaging, election-rigging despot without going to war.

RELATED: What can Canada do for Venezuela?

The Conservatives’ Erin O’Toole and Peter Kent have argued for a slightly different line than the Lima Group has taken, preferring a more active role for the Organization of American States in evicting Maduro from his palace in Caracas. But that’s about it. The NDP, however—owing to a series of contradictory utterances and weird pronouncements from certain of the party’s yesteryear characters, a handful of sitting MPs and some of the party’s up-and-coming personalities—has lost the plot.

And that was before all the whirlygig recapitulations of what the NDP’s criticism actually is ended up leaving the nominal NDP leader, Jagmeet Singh, looking profoundly airheaded on the subject, and apparently at odds with his own parliamentary caucus, besides. This, too, is a much bigger deal than you might think. What’s happening here is not just an instance of the NDP’s incoherence and a gong-show inability to articulate a clear party line.

This is about an abdication across the Euro-American “Left” from the challenge of having something useful to say about the ever-intensifying global struggle for democracy, and the challenge of articulating some kind of genuinely progressive internationalism. You’ll find this slovenliness at the helm of Britain’s Labour Party, in the rank-and-file of several European leftist parties, and at the fringes of the U.S. Democratic Party—which otherwise officially supports Guaidó.

The NDP’s unravelling on the Venezuelan question came to public notice shortly after Singh issued a terse and anodyne statement about how Venezuela’s fate should be decided by Venezuelans, but that Canada “should not simply follow the U.S.’s foreign policy, particularly given its history of self-interested interference in the region,” which is nothing like what Canada was or is doing at all.

Singh’s statement circulated in tandem with declarations by Manitoba MP Niki Ashton and former NDP star Svend Robinson (who has announced a return to politics) to the effect that Guaidó was mounting a U.S.-backed “coup” in Venezuela. In what appeared to be an effort to clarify the NDP’s position, Singh later uttered more platitudes about how Venezuelans should choose their own government. But when pressed, he refused to recognize Guaidó as Venezula’s interim leader—even though Laverdière, the party’s foreign affairs critic, and caucus chair Matthew Dubé, had insisted that the NDP held no official objections at all to Canada’s assertion that Venezuela, for now at least, had a new leader—Juan Guaidó.

RELATED: Venezuela’s collapse and the ‘useful idiots’ of the Canadian left

The background to all this is the surfeit of Maduro supporters in the NDP’s activist base, not least Common Frontiers—an outfit drawn from labour unions and the United Church—which had preposterously “observed” Maduro’s most recent election to the presidency and declared it an exemplary exercise in democracy. Maduro was “duly elected by the people of Venezuela,” the Canadian Union of Public Employees has lately explained. Maduro’s election, boycotted by the opposition and condemned as fraudulent by the European Union, Canada, the United States and most South American countries, proceeded with key parties excluded and key candidates in prison or in exile.

But that’s what it’s come to. Instead of supporting an anti-authoritarian democrat backed by Venezuela’s National Assembly as the country’s interim leader—Juan Guaidó’s party, Popular Will, is a social-democratic party and a member of the Socialist International, incidentally—a powerful bloc within the NDP prefers to back a tyrannical regime that has driven Venezuela to ruin.

Inflation is in such hyperdrive the value of the currency gets cut in half every three weeks. Three million Venezuelans have fled the country. Venezuela is a basket case, a nightmare zone of hunger, sickness, and despair.

While he was refusing to back Guaidó, all the while insisting at a press conference, against all evidence, that there was no division in the party on the subject, Singh uttered this astonishing statement: “We must advocate for the United Nations to be involved.”

RELATED: What the yellow vests’ revolt revealed about the sad state of the Left

The NDP was facing a simple choice. It could back Guaidó and the National Assembly, and stand with Canada, almost the entire European Union, the United States, and a host of democratic governments representing two-thirds of the population of South America. Or it could side with Belarus, China, Syria, Russia, and all the other torture states that are in the ascendant these days.

It would not be fair or accurate to say that the NDP has chosen to side with the tyrants and mass murderers of the world. But it is more than fair to say that the choice has been so confusing for New Democrats that they cannot say, with a straight face, exactly whose side they’re really on.