These people have a country to run

Four key figures in Finland's new government are women in their 30s, including the world's youngest PM—a profound changing of the guard 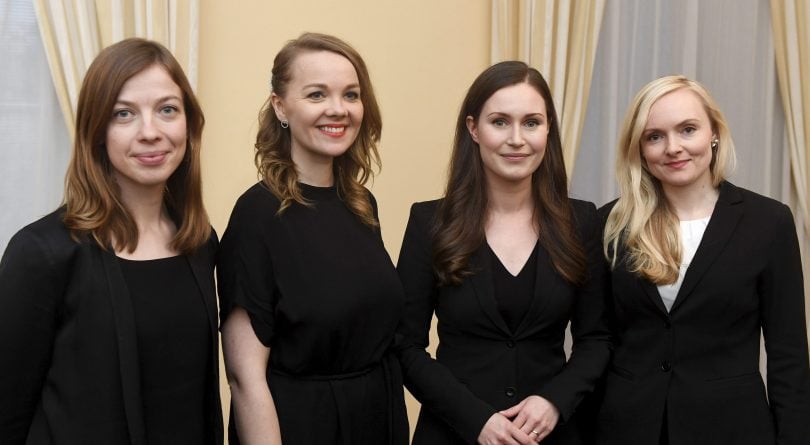 It’s an image to stop you in your tracks, on several different levels.

The photo looks to be a snapshot taken on someone’s phone: it’s sharp, but has a purely workmanlike composition. In it are four key figures in Finland’s new government, all wearing well-tailored black business attire, standing in front of a buttery-yellow wall and two curtained windows.

Of course, this photo tells you nothing about what lies in the brains and backgrounds and legislative plans of those four young women now running a progressive Nordic country. But after umpteen decades and untold reams of photos and oil paintings depicting clutches of craggy older men running countries all over the world and human history, that photo nevertheless means something big.

Last April, Marin’s Social Democratic Party narrowly won the Finnish election, but with just 18 percent of the vote, they needed to form a coalition in order to govern. They did so with four smaller left-leaning parties, excluding the nationalist Finns Party that won nearly as much of the popular vote as the Social Democrats did. The three prominent ministers in that photo with Marin lead three of the other coalition parties; all five of the parties in the governing coalition are headed by women, and four of those five women are under 35.

Marin assumed the prime ministership after Antti Rinne—57 years old and your standard-issue grey-haired political dude in a suit—resigned due to blowback over his handling of a postal strike.

His successor won a vote among Social Democratic members narrowly, but her ascension was far from a bolt out of the blue.

Marin gained notoriety for cooly handling tempestuous meetings as head of the city council of Tampere between 2013 and 2017. She was first elected to parliament in 2015 and re-elected earlier this year, and she’s served as minister of transport and communications. Marin has spoken about how her personal background—she grew up in a low-income family and was raised by her mother and her same-sex partner after her parents split—attuned her to other people who don’t fit society’s usual molds.

She just became the world’s youngest Prime Minister, but she is Finland’s third female leader. With 42 per cent female representation in its national parliament, the Nordic country ranks 12th worldwide in terms of gender balance in national politics, and it has a decades-long track record of strong female representation. Canada, by comparison, sits in 61st place, with just 27 per cent women in the House of Commons.

So within Finland and among close observers of the country’s politics, the gender of the new prime minister and her leading ministers is unremarkable, but their age is, representing a profound generational changing of the guard.

Marin, however, seems to have no time for the demographic fixation. “My thoughts have been in the proceedings and I have not followed the international and national media coverage,” she told reporters. “We have promised change. Now we need action. I believe that trust will return through action.”

There’s no sense wasting time or energy talking about who you are and why other people find that amazing when there’s a country to run. And that’s exactly as it should be.