To vote or not to vote: Iran's election dilemma

If Iranians in Canada want to vote in their election, they'll have to cross the border to the U.S. But should they cast a ballot at all? 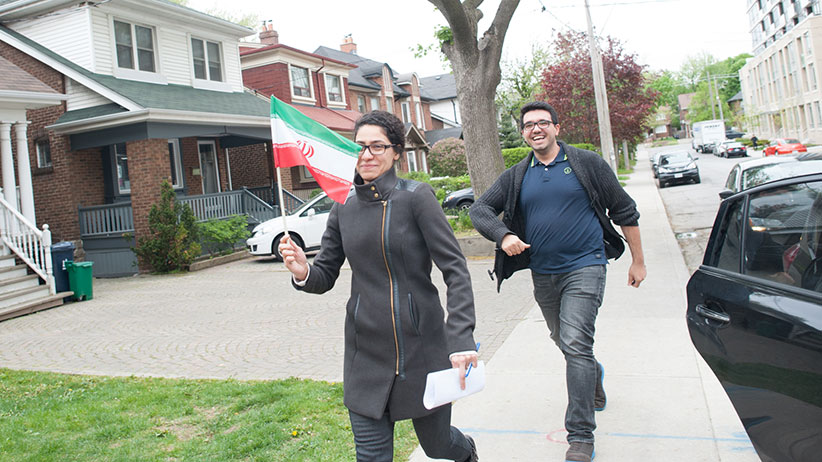 A group of Iranian Canadians prepare to travel to Buffalo, N.Y. and cast their vote for the 2017 Iranian presidential election. (Photograph by Cole Garside)

Arash Abadpour knows his vote in Iran’s presidential election doesn’t matter. And yet on Friday morning, he met up with dozens of Iranian-Canadians so everyone could drive from Toronto to New York State together—a trip necessitated by the fact Canada won’t allow Iran any polling stations north of the border—simply to cast a ballot that probably won’t make a difference.

For starters, the election is rigged—at least to a certain extent. The handful of candidates on the ballot were pre-approved by Ayatollah Ali Khamenei, Iran’s Supreme leader since 1989, who will still run the country regardless of who wins. And the current crop of contenders is hardly a best-of-the-best: one candidate has been directly implicated to crimes against humanity. But no write-in votes are allowed, so it’s up to Iranians to pick their favourite from the Supreme Leader’s list. No wonder many call it a “selection” instead of an election.

Abadpour couples that obvious dilemma with his well-founded doubt that an Iranian official will even bother looking at his ballot. By the time he arrived at the closest voting booth in Buffalo, mid-afternoon local time, it was already late in the evening in Tehran, where ballot counting was already underway. The government-controlled news outlets could be ready to call a victor before anyone even looks at his vote.

“My vote is probably not even going to be counted,” concedes Abadpour, an Iranian blogger based in Toronto. “At the end of the day, my vote does not matter.”

And yet, that didn’t stop Abadpour from taking a full day off work, helping organize the caravan from Toronto to the University of Buffalo, risking a major hassle at the U.S. border on account of their country of birth—all for an election that will have no significant impact on their day-to-day lives, and perhaps not even the people of Iran.

It begs the question: why even bother?

“The more important question is: why would I not participate?” Abadpour says. “I am a critic of Iran’s political system. There are many aspects that don’t make sense, but how can we change them? A military invasion, a coup d’état, another revolution? I don’t like any of these options. But there is one option I like: participation in elections.”

And that includes this election, even if it’s not as fair or free as he would like.

Four years ago, there was no group trip to America. Instead, the Iranian-Canadian community ran a symbolic election, where an organizing committee printed official-looking ballots and walked the streets of Toronto to collect votes from Iranian ex-pats. It was successful at attracting attention, albeit meaningless in terms of an actual vote count, so Abadpour wanted to do something more meaningful this time around. Ergo, the trip to the Land of the Free.

Iranians in Canada who can’t travel to the U.S., however, must either forego voting or look for creative solutions. Najme Kishani has lived in Canada on and off since 2010. She wanted to join Friday’s voyage, but the visa she applied for months ago still hasn’t been approved. As an alternative, she explained her dilemma via social media, targeting those in Iran actively choosing to not vote. “I recorded a 30-second video and asked ‘can you vote instead of me?’” Kishani says. In the end, she found a stranger willing to help out.

But as some Iranians in Canada are going through great lengths to vote, there are also plenty who, frankly, aren’t sure why anyone would spend the time and energy.

“Every four years since the mid-1990s, we’ve been hearing this argument that the ballot box in Iran is the best way of bringing out slow, incremental change,” says Kaveh Shahrooz, an Iranian-Canadian lawyer based in Toronto. “We haven’t seen any change in the past 20 years.”

Iran currently ranks second in the world for executions, trailing only China; Iranian women are still second-class citizens, including a star soccer player who couldn’t play in an international tournament because her husband wouldn’t let her to leave the country; and Iran’s ethnic minorities continue to be repressed. Not to mention all the political prisoners and human rights abuses.

Shahrooz is among many Iranian-Canadians who don’t vote—not out of apathy but rather principle. “When people show up in record numbers at the ballot box, the Iranian government can claim legitimacy,” he says. “One benefit of not voting is that it tells the world that this government does not represent the Iranian people.”

Maryam Nayeb Yazdi never votes either, and doesn’t shy from explaining why. “If people don’t vote, stay silent and stay home, that’s not productive either,” says the Iranian-Canadian human rights activist. Instead, she says, they should be calling for free and fair elections among their friends or social media. But don’t vote, she urges: “When you legitimize evil, evil proliferates.”

And yet if people don’t vote, one common argument goes, it paves the way for a hardline candidate to win, making life even worse for those living in Iran. “There’s a real difference between [the two main candidates] Ebrahim Raisi and Hassan Rouhani,” says Tayaz Fakhry, who was among the Iranian-Canadians joining the voting road trip to Buffalo. “If the people choose Raisi, there’s no intention from him to continue the nuclear deal and he doesn’t believe in some social freedoms like people attending concerts or how they can dress on the street.”

But Yazdi says take a closer look at Rouhani, who came to power in 2013 as a reformist. The economy hasn’t taken off, yet one thing that’s gone way up since he became president is the number of executions—and that’s in comparison with his predecessor, the hardliner Mahmoud Ahmadinejad.

Next comes the debate over what power Rouhani, or any Iranian president, even has. “You do have a parliament and a president, but both are impotent,” says Samira Mohyeddin, a journalist and restaurant owner in Toronto. “The country is run by one ruler: the Supreme Leader.” In her opinion, any vote is a vote of the Islamic Republic, and for that reason she finds voting meaningless.

The last time Iranians could vote in Canada, in 2009, more than 3,000 people drove to the Iranian embassy in Ottawa to cast a ballot, according to the Iranian-Canadian Congress (ICC). “We believe it’s important as a democracy that Canada should support democratic movements across the world, “says Pouyan Tabasinejad, policy chair of the ICC. “No one is saying elections in Iran are perfect or the electoral process is perfect, but it is civil engagement.” The ICC, to be clear, isn’t recommending Iranians travel to Trump’s America and subject themselves to potential unfair scrutiny at the border. Yet re-opening the Iranian embassy in Canada, critics argue, would also re-open old wounds—not least Iran’s alleged use of the embassy as a base from which to spy on dissidents.

Nothing is straightforward on Iran’s election day. And while most people in the Iranian-Canadian community agree in the need for substantive change in Iran’s governance and electoral process, there’s a clear divide on how best to solve that riddle. But it does get everyone talking.

“The whole conversation of ‘what does it mean to be a citizen’ gets reignited every four years, and I see value in that,” says Abadpour. “Even if it’s just for that, I’d take the ride to Buffalo.”