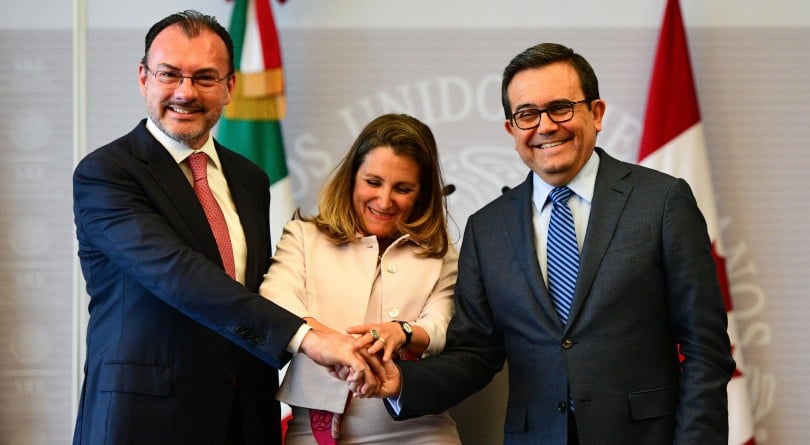 It was always something of a condescending belief: the thinking on the part of some Canadian economists and thought-leaders that, because the feud between U.S. President Donald Trump and Mexico was a vicious and existential one, it was in Canada’s economic interests to pursue a bilateral deal with the United States as NAFTA renegotiations became stuck in the mud. But then, the tables felt as if they were turned: last week, Trump told reporters that he was fond of newly elected Mexican president Andrés Manuel López Obrador, adding that negotiations with Mexico were going so well, Canada might be an afterthought. “We may do a deal separately with Mexico and we’ll negotiate with Canada at a later time,” he said. “But we’re having very good discussions with Mexico.” Suddenly, it became possible that Canada—initially confident, but now embroiled in a petty, impactful trade war and in a squabble over NATO commitments—might actually be the odd man out.

It was amid those fears that a squad of Canadian ministers were deployed to Mexico Tuesday, seeking assurances the country wouldn’t cut Canada loose. That rumoured crisis was neatly nipped; Mexico’s outgoing foreign and economy ministers, as well as members of López Obrador’s incoming administration, stated firmly that Mexico was only interested in a trilateral agreement.

“We will be closing ranks with Canada and, without doubt, we will be closing ranks with the United States if it’s willing to have a good agreement,” Ildefonso Guajardo, the economy minister for Enrique Peña Nieto’s outgoing PRI government, said after a meeting with Canadian foreign minister Chrystia Freeland. “We think the free trade agreement must remain a trilateral agreement,” reinforced Marcelo Ebrard, tapped as foreign minister in a López Obrador administration, outside the transition team’s headquarters in the hip Roma neighbourhood.

But the brief brouhaha still revealed what NAFTA means in Mexico—and what a new administration might bring to the table as negotiations continue.

READ MORE: What one wedding photo tells us about Mexico’s political paradigm shift

Mexico elected López Obrador, more commonly referred to as AMLO, in a landslide on July 1, handing the populist, three-time presidential candidate and former Mexico City mayor a majority in each of the houses of Congress, not to mention a broad mandate for change in a country convulsing with violence and crippled by corruption. That change mandate extends to the economy, which has underperformed the claimed benchmarks of NAFTA promoters, who promised that the deal would make Mexico “First World.”

But while López Obrador said little on the issue while on the hustings—spare a salvo in his campaign kickoff in Ciudad Juárez on the U.S.-Mexico border, where he opined that “if it were certain that (NAFTA) only benefitted Mexico, our economy wouldn’t stay stuck and there wouldn’t be immigration”—he has since shown surprising support for NAFTA. He’s pledged full cooperation on NAFTA negotiations with the outgoing government during the five-month transition period, and in a sign of the spirit of cooperation, outgoing foreign minister Luis Videgaray tweeted a photo of the NAFTA negotiating team—including López Obrador’s proposed lead negotiator, Jesús Seade—pulling suitcases through the Mexico City airport as they headed for talks Wednesday in Washington.

It’s evidence to suggest that NAFTA simply isn’t a major issue for many in Mexico. Indeed, while NAFTA often makes front-page news in Canada, it’s been far from top-of-mind in Mexico. The recent election was mostly fought on more acutely felt topics like corruption, crime, poverty, and the economy in a generic way. Even the airport photo drew more comments about how government ministers were attempting to show austerity by taking commercial flights than they did about foreign trade—especially since López Obrador has promised a more austere administration and proposed measures such as taking a 60-per-cent pay cut, selling the presidential plane and moving about with minimal security.

The analysis from pundits that López Obrador might be Mexico’s reaction to Trump’s trashing of the country, or that he might usher in an anti-American administration—punditry that often came from outside Mexico—has proven false so far, too. Indeed, the U.S. president—who was a non-issue in Mexico’s election, despite his constant discourtesies—has spoken positively of López Obrador. “Terrific person. I spoke to him at length on a call, (he) did a great job, got a tremendous vote,” Trump said Monday. We’re talking to them about doing something very dramatic, very positive for both countries.” And López Obrador also sent a seven-page letter to Trump, raising four priorities for his administration: commerce, migration, security and development. His latter point includes a plan for government-sponsored development in southern Mexico, where NAFTA has barely had an impact. It involves building a high-speed train from Cancún to Palenque, putting a railway line across the Isthmus of Tehuantepec, building two new refineries and planting trees across the region. Along the northern border, he’s proposed doubling the minimum wage and cutting the sales tax.

“I must comment that the most essential intention of my government will be to ensure that Mexicans do not have to migrate because of poverty or violence,” López Obrador told Trump. “The new project of nation we will carry out will be to eliminate corruption, abolish impunity, act with austerity and allocate everything saved to financing the development of the country.”

López Obrador even ended his letter with a flattering reference to one of Trump’s favourite talking points: the way he rose to power. “We managed to put our voters and citizens at the centre and displace the political establishment,” wrote López Obrador, who likes to call his opponents “the mafia in power.”

The attempt at finding common ground with Trump caused some disquiet from supporters, who chafed at critics comparing López Obrador to Trump in the campaign. “A questionable missive,” opined left-wing newspaper La Jornada.

Some analysts saw Trump’s kind words as only a temporary respite. “As the midterms approach, the temptation to use México and Mexicans as a piñata to energize his base will become stronger and stronger,” said Carlos Bravo Regidor, a professor at the research university CIDE.

But others say there are authentic commonalities between Trump and López Obrador, even if their politics occupy opposite ends of the spectrum.

“I think they will get along,” said Federico Estévez, professor at the Autonomous Technological Institute of Mexico. “They have certain central beliefs that put them on opposing sides, but they’re exactly the same kind of belief in terms of its core content: economic nationalism, the anti-establishment part, politicized justice system. All those things were shared.

“What this means is that if there is wiggle room in issue areas, they may indeed come to agreements.”

Mexico and Canada, on the other hand, would seem to be allies with a common cause, and López Obrador’s administration would have plenty to gain from working closer with Canada—especially as relations with Trump, or even the perception of relations, have proved problematic for the outgoing Mexican government. “A closer relationship with Canada would please those in Mexico, who want to be less dependent on the U.S. as well as those who—right or wrong—fear closer relations with leftist, populist governments in South America,” such as Venezuela, said Barbara González, a political commentator in Monterrey.

And for his part, Ebrard—who, like López Obrador, was once a Mexico City mayor, and who successfully introduced measures such same-sex marriages and decriminalized abortion during his time in office—preferred to play up the similarities between the incoming administration and the government of Prime Minister Justin Trudeau. “There’s an affinity on many points because we’re talking of a government that champions progressive principles … human rights, labour rights, the environment and respect for Indigenous peoples.”

Common cause or not, though, the rumours of a Mexico-U.S. bilateral—and Canada’s quick, nervous response—did show that a newly emboldened Mexico has more leverage than it has let on. López Obrador administration is expected to return to Mexico’s traditional foreign policy of non-intervention: not opining on the internal affairs of other countries, but expecting similar non-intervention from others. But when Ebrard expressed hopes that Canadian companies would invest in López Obrador’s plans for southern Mexico, a reporter raised the uncomfortable question of Canadian mining companies, whose track records have caused controversy.