What really happens in Davos

There are the Wall Street elites, the wild parties, the Canadian piano player—but also some of the most important work being done in the world 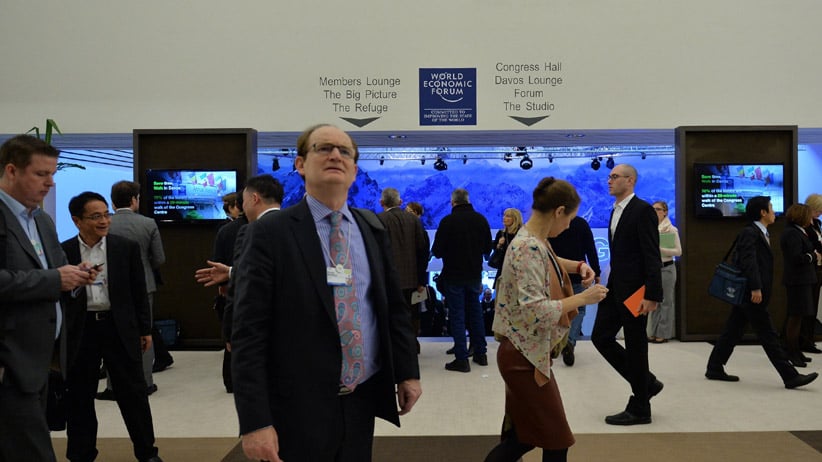 People walk in Congress Centre on the opening day of the 45th annual meeting of the World Economic Forum (WEF), in Davos, Switzerland, on Jan. 21, 2015. (Dursun Aydemir/Anadolu Agency)

Davos, the annual summit of the World Economic Forum (WEF), has become infamous as the symbolic embodiment of the one per cent’s shadowy global plutocracy. In reality, it is much less conspiratorial, and far more entertaining, than its reputation suggests.

It is true that the attendees are, by almost any measure, the world’s elites. But it is not just Wall Street robber barons and Russian oligarchs. The WEF, a Swiss-based non-profit dedicated to “improving the state of the world” goes to some length to ensure there is a (relatively) more inclusive guest list. There are also social entrepreneurs, activists, scientists, writers, even union leaders and artists. The latter can usually be easily identified by their intentionally avant-garde outfits and shock of Day-Glo green hair, transmitting the message “I may be here, but don’t think for a minute I’m one of you!”

The attendees are also geographically diverse. You are just as likely to share a taxi with the editor of a Mozambique opposition newspaper as you are with Thomas Friedman (who will inevitably be grilling the driver about the implications of recent shifts in monetary policy).

Canadians are especially well represented at Davos. Not only are there the usual Bay Street suspects, but several government cabinet ministers can always be counted on to attend. But the biggest contingent is among the WEF employees themselves, where multilingual Canadians are particularly valuable. The most prominent Canadian at Davos is likely Barry Colson, an itinerant musician from Halifax who is a famous fixture at the Piano Bar in the Hotel Europe. The after-after parties usually culminate with a minor European royal reclining on his grand piano while leading the bar in New York State of Mind.

The parties at Davos are not necessarily the bacchanalia one would expect (or hope for). The WEF hosts a couple of galas, which are usually sober affairs sponsored by countries hoping to highlight their cuisine, music and investment opportunities (now that the civil war is over). Major corporations also host expensive cocktails every night, but the better parties begin later at events hosted outside the conference centre in the hotels of Davos village itself. There, Google, Facebook and McKinsey compete to throw the coolest parties. But the best events are unadvertised, difficult to find and even harder to get into. They’re hosted by young Silicon Valley billionaires in nearby villas, and you usually only hear about them the next morning as stories circulate of Henry Kissinger doing Jägerbombs with Miley Cyrus.

There are other distractions, too. A luxury car manufacturer sets up a racecourse on the ice of a nearby lake. There are long, rocketing bobsledding runs that end by careening through the streets of the village. But all of this is overshadowed by the real business of Davos, which is the conference itself.

It is a collection of small talks, keynotes, panel discussions and demonstrations that focus on an annual theme. They are all meticulously organized and curated. The presenters are almost always the global leaders in their field. The one thing they all have in common is their earnest sincerity. Away from the gaze of the media (who are collared by the hundreds outside the conference), attendees fret and worry about climate change, inequality and human rights as much as the protesters who are kept even farther away.

This may be why the green-haired artists keeps coming back and why Davos has grown into a centrally important gathering on par with the UN General Assembly. It is perhaps the only place in the world where the CEO of Goldman Sachs and an Indian poverty activist come together and talk about income inequality and banking for the bottom billion. These unlikely interactions frequently lead to even unlikelier partnerships and, in many cases, real progress on issues that matter to everyone, whether they’re a global elite or not.