Terry Glavin: 'We have emboldened China’s thuggish behaviours, because we haven’t done anything,' says one organizer 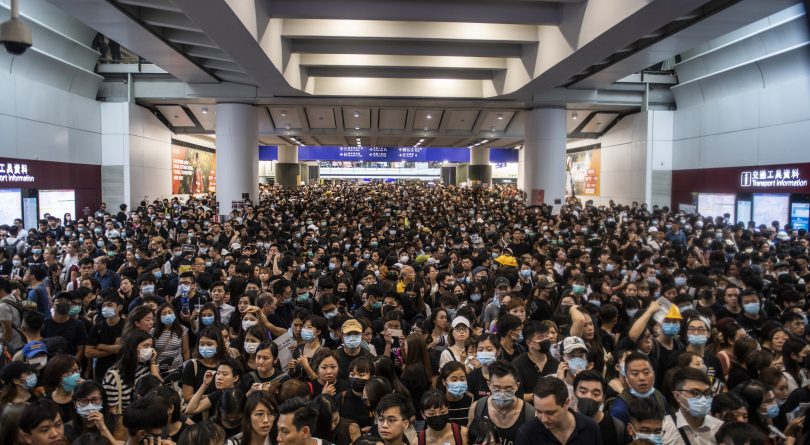 All flights out of Hong Kong International Airport were cancelled this afternoon as authorities blamed protesters for disruptions following a brutal police crackdown on street demonstrations over the weekend. In the most dramatic civil disturbances since Hong Kong was turned over to China in 1997, more than 600 people have been arrested in what has been a largely non-violent uprising. It has carried on for 10 straight weeks.

In an ominous escalation of its threats of retaliation, Beijing dispatched a massive convoy of armoured vehicles from the Peoples Armed Police that arrived Saturday at a stadium in Shenzhen, just across the border from the semi-autonomous financial hub. Last Tuesday in Shenzhen, following a general strike that paralyzed much of Hong Kong, more than 12,000 “anti-riot” police engaged in elaborate mock riot-suppression drills. On Sunday, a senior Communist Party official declared that “the first signs of terrorism” are beginning to appear in Hong Kong.

The confrontations over the weekend sent 40 people to hospital, including protesters, volunteer medics, journalists and bystanders. They were injured by baton-swinging police or struck by tear-gas canisters, rubber bullets or bean-bag rounds fired at close range directly into groups of people in crowded metro stations.

The Hong Kong protests have been escalating ever since June 9, when a million people marched in opposition to a now-suspended extradition bill that anticipated the integration of Hong Kong into China’s penal system. The protesters’ demands quickly grew to include the full withdrawal of the proposed law, a retraction of the “riot” classification that put protesters arrested in a series of clashes on June 12 at risk of 10-year prison sentences, amnesty for all arrested protesters, an independent inquiry into police conduct, and perhaps most importantly, the relaunch of a promised electoral reform process—the main objective of the failed 2014 “Umbrella Movement” protests—to establish a system of one person, one vote.

This summer’s protests constitute the most direct challenge to Chinese leader Xi Jinping since he consolidated power seven years ago and embarked on a policy of accelerated internal repression and outward neo-imperialist belligerence. Xi’s reign has been marked by intensive surveillance and ramped-up censorship, the persecution of human rights defenders and the mass incarceration of the Muslim Uighurs of Xinjiang.

His foreign-policy initiatives include the annexation of the South China Sea, the militarization of China’s global “Belt and Road” initiative and a series of outlandishly aggressive moves, not least the “hostage diplomacy” at work in the arbitrary arrests of Canadian citizens Michael Kovrig and Michael Spavor.

A recent poll by Hong Kong’s Public Opinion Research Institute found that while 58 per cent of the protesters are animated by their dismal economic prospects, mostly in relation to housing, 84 per cent say they’re protesting on account of their distrust of Lam’s administration, and 87 per cent are taking to the streets for the “pursuit of democracy.”

Natalie Hui, a senior member of the Canadian Friends of Hong Kong organization, says Canadians are not facing up to the dire implications of the Hong Kong crisis, and Prime Minister Justin Trudeau is foolishly wishing it would all just go away. “What we are seeing in Hong Kong is a crystal ball for Canada,” Hui told me.

There are at least 300,000 Canadians in Hong Kong. Canada is home to another 1.5 million ethnic Chinese. Many have family in mainland China, and they fear that their relatives will be harassed if they speak up. The Trudeau government’s policy of business-as-usual trade engagement and otherwise saying nothing to arouse Beijing’s ire will do nothing in the cause of freeing Spavor and Kovrig, who were arrested in retaliation for last December’s detention in Vancouver of Meng Wanzhou. The chief financial officer for the Zhenzhen telecom giant Huawei, Meng was picked up on a U.S. Justice Department extradition warrant on charges of bank fraud and evading U.S. sanctions on Iran.

On the bright side, Hui said Hongkongers are showing that you can fight Beijing, and if you won’t necessarily win you won’t necessarily lose, either. Hongkongers have fought Beijing to a draw, so far, and they’ve managed to stop the extradition bill in its tracks. “Hong Kong is showing that you can push back. They are inside the mouth of the lion, but they still say no to the regime. But we must take action now.”

The Trudeau government, however, has failed to uphold the global values it so loudly claims to cherish. “This is a very critical moment in history. I don’t want to demoralize people but I think the Chinese Communist Party will destroy peoples’ careers and arrest a lot of people. Canada is weak. As a Canadian citizen, I have not seen anything from our government. We have emboldened China’s thuggish behaviours, because we haven’t done anything. It’s just silence.”

Maclean’s reached out to Foreign Affairs Minister Chrystia Freeland’s office for comment, but got no response.

David Mulroney, Canada’s ambassador to China from 2009 to 2012, agrees that silence is the worst policy. “We’ve really, really let down the side. It may be too little, too late now, but I’d like to see clearer statements from the foreign minister and the Prime Minister. Anything is better than silence.”

The horrible predicament that Kovrig and Spavor face is no excuse for Canada’s silence, Mulroney said. “China is hoping they can so intimidate people and cow people in the west that they can achieve their aims with almost no cost to themselves. When Canada is silent, when much of Europe other than the U.K. is silent, it’s easier to get away with what they’re trying to do, to undermine what freedoms Hong Kong still has.

“You’ve got to be honest with China. You’ve got to be direct with China, whether it’s detentions of Canadian citizens or attacks on democracy and autonomy in Hong Kong, we have to speak up whenever we can. I don’t think our silence does anything other than confirm China in its commitment to hostage diplomacy. If they find that by doing this they secure our silence, it makes it even more likely that they’ll do it in the future. It confirms them in their proclivity to take hostages and detain people. So it does nothing to change their behaviour.”

While U.S. President Donald Trump has been worse than useless—Trump has praised Xi for his restraint in dealing with Hongkongers, and has referred to the protests as “riots”—one of Hong Kong’s best hopes at the moment is the bipartisan Hong Kong Human Rights and Democracy bill that’s up for consideration in the U.S. Congress when the summer recess ends after Labour Day. Mulroney has added his name to a letter from a long list of China experts, directed to House Speaker Nancy Pelosi, urging quick adoption of the bill.

Among other things, the bill would potentially remove Hong Kong’s special status in U.S. trade law, a status that has allowed China to evade rules and sanctions by employing Hong Kong as a conduit for inbound and outbound investment since the early 1990s. The bill would also suspend visa restrictions on criminal convictions for individuals convicted for participating in demonstrations, and would sanction Chinese and Hong Kong officials deemed guilty of human rights abuses.

Passage of the bill could put Beijing on notice that if the Hong Kong democracy movement is crushed, Beijing would reap no benefit, but would instead stand to be punished severely in its trade relationships with the United States.