Why Turkey, not Trump, is the NATO wildcard

Adnan R. Khan: Ignore Trump and his theatrics. The real issue when NATO meets will be Turkey and its dangerous drift into Russia's orbit. 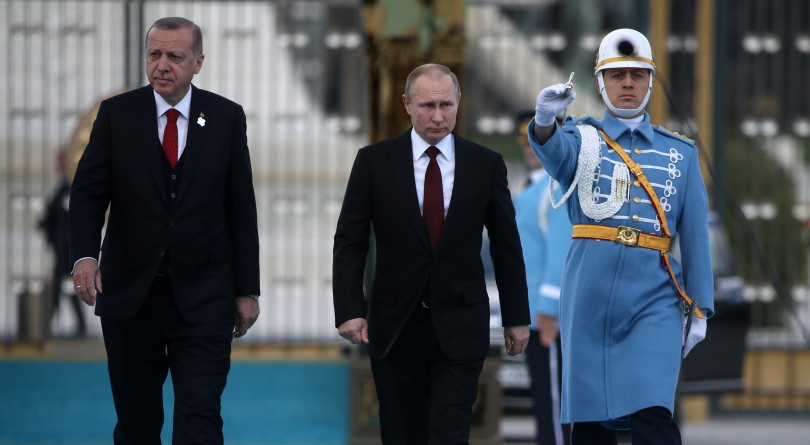 When NATO leaders meet in Brussels this week, all eyes will be on Donald Trump and what has become his trademark of blowing up international summits.

The script is more or less written: Trump will berate the U.S.’s staunchest allies for not pitching in their fair share. He will lament the erroneous fact that America has played bouncer at Club NATO while other members have partied it up inside.

But we can sometimes forget that Trump’s full-throttled bluster is more Reality TV than reality, particularly when it comes to foreign policy. His “historic” summit with North Korea’s Kim Jong-un on June 12 is proving to be little more than a very expensive theatre performance. The “friendly” dialogue it was supposed to launch isn’t looking so friendly after all.

So much for the “new era” in relations Trump promised.

The NATO Summit will not be any different. The alliance will survive and Trump’s tantrums will blow up Twitter, but not much else.  Of course, without U.S. backing NATO would almost certainly collapse but it’s unlikely the U.S. will outright abandon the alliance anytime soon, despite Trump’s very public attacks on it.

Trump’s theatre of the absurd on Twitter and at his rallies is a diversion from the basic facts: defense spending among NATO allies, Trump’s main beef, has been on the rise since 2014 and  no one besides the U.S. president actually believes that the alliance is “obsolete.”

U.S. military commanders, particularly Secretary of Defense James Mattis, a retired marine general, have a very different view and, as some experts have argued, Trump has passed on security policy to the military to a degree rarely seen in American politics. Even his national security advisor, John Bolton, has publicly backed NATO.

So there is very little danger of the U.S. triggering a NATO breakdown in the near future. More worrying is Turkey.

Election results last month demonstrated that the kind of authoritarianism and social conservatism valued by Vladimir Putin is also held in high regard by Turkish President Recep Tayyip Erdogan and his supporters. The June 24 elections, moreover, took Turkey over the last hurdle on its transformation from a fractious, but more democratic, parliamentary system of governance to a highly centralized presidency backed by an economic oligarchy that controls the country’s media, similar to Russia.

Consequently, NATO now has a member that is firmly aligned with Putin in the so-called illiberal democracy camp of nation states. It’s not the only member—Hungary, Poland, Slovakia and Croatia are also governed by leaders who, to varying degrees, reject the liberal democratic order—but it is by far the most important. Losing Turkey, whether to non-alignment or worse, to Russia, could prove fatal to NATO.

READ MORE: When Trump meets Erdogan, who will blink first?

We’re not there yet, but the momentum is shifting in that direction. Under Erdogan, Turkey has repeatedly exercised its independence and developed a national security policy that brings it closer to Russia. The purchase of the Russian-made S-400 missile defense system is one example. NATO commanders have criticized the purchase because the system cannot be integrated into Europe’s defense networks. Turkish leaders argue that their decision was based on their own national security interests, which trump any treaty obligations.

The S-400 is considered a more advanced system than its competitor, the U.S. Patriot system. And in the U.S. arms transfers must go through an extensive congressional approval process. Buying from the Americans, as one analyst in Turkey told me, “would have meant a highly unreliable supply structure of a critical weapons system that Turkey is in need of.”

The missile defense deal becomes even more complicated if you throw in the agreement between Turkey and the U.S. for the purchase of advanced F-35 stealth fighter jets. That deal was signed last December, but American lawmakers have repeatedly blocked the transfer of F-35s in light of the S-400, arguing that the Russian missile defense system may be used to collect information on the F-35’s vulnerabilities, which could then land in Russian hands.

Turkey’s growing independence also poses some serious geopolitical threats for NATO. Russia’s expansion in the Black Sea region, from its annexation of Crimea to efforts to bring Romania and Bulgaria—whether through coercion or cooperation—back into the Russian sphere, is shifting the strategic balance in Russia’s favour.

Turkey’s control of the Bosphorus and Dardanelles straits, the waterways that connect the Black Sea with the Mediterranean, has been a contentious issue for decades. In the 1940s, when the Soviets dominated the Black Sea and NATO considered the Mediterranean its strategic stomping ground, so important were the straits to Stalin that he nearly went to war with Turkey over them, prompting the Turks to join NATO in 1952. Bringing Turkey into the NATO fold ostensibly cut the Soviets off from access to the Mediterranean.

Today, the Bosphorus and the Dardanelles are again arguably the world’s most important strategic properties, which places Turkey, again, at the centre of a tug of war between NATO and Russia. An unreliable Turkey raises the spectre of unhindered Russian naval expansion into the Mediterranean, exposing NATO to Russian attacks in its own backyard.

That possibility, though unlikely at this moment in history, looms on the strategic horizon for NATO. No one is quite sure what kinds of deals are shaping up behind closed doors but Russia has been working hard to pull Turkey into its sphere, lifting sanctions it imposed after one of its fighter jets was shot down by a Turkish F-16 at the Syrian border in 2015 and signing massive economic deals, including a $20 billion project to build Turkey’s first nuclear power plant, at a time when Turkey is in desperate need of foreign direct investment.

Trump, meanwhile, has promised Erdogan he will smooth over the issue of the F-35s, possibly in return for Turkey abandoning the S-400 deal. Erdogan has said, however, that that deal is final.

Turkey, for its part, appears perfectly willing to play both sides. Publicly, Turkish officials have assured its allies that its relationship with Russia is purely transactional and that its membership in NATO is strategic. But on occasion, Erdogan has slammed the alliance for what he has called its “double standards”, particularly NATO’s refusal to support Turkey’s military offensive in the northern Afrin region of Syria, which received the tacit approval of Russia.

It’s possible Erdogan, like Trump, is using the threat of abandoning NATO as a negotiating tactic or to play up to his domestic supporters. Trump’s grandstanding, however, is plainly theatre. Erdogan comes to the negotiating table with hard political currency. His presence at the NATO Summit will be overshadowed by Trump, but his will be the more consequential.