Would the Liberal Democrats stand a chance in a U.K. election?

The surprise U.K. election has given Liberal Democrats new hope they can galvanize voters around Britain's exit from the EU. Will it work? 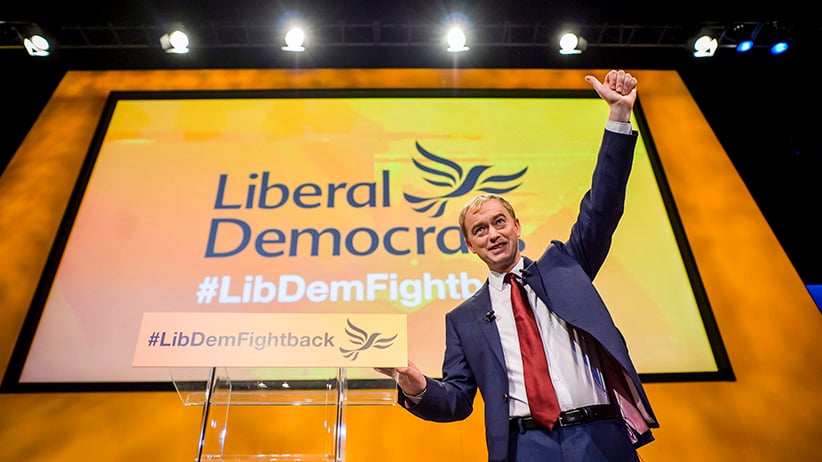 When Britain’s Conservative Prime Minister Theresa May announced last week that she wanted a general election, framing it as a bid to gain a more unified endorsement for the government’s Brexit plan, the Liberal Democrats rejoiced. “There was whooping, shouting and cheers” at the Lib Dem headquarters, according to the party’s leader, Tim Farron. Because, as it happens, the Lib Dems also want to put the question of Britain’s pending exit from the European Union to the public again—only they want to argue it from the other side. If the British public “wants to keep Britain in the single market, and keep a Britain that is open, tolerant and united, this is the chance,” Farron wrote in the Independent.

But what chance is there for that to happen? Could the Lib Dems become a major factor in this election?

First, here’s what we know for certain: The Liberal Democrats currently occupy nine seats out of a possible 650 in the U.K.’s House of Commons. To form government on June 8, the party would need to not only hold those seats, but win at least another 317. It would need to win another 220 even to match the strength of the current opposition, Labour. The highest total of seats the Lib Dems have ever held in the House of Commons is 62. To say the Lib Dems have their work cut out for them is to understate the matter significantly.

Yet, in the early days of this campaign, some stars are aligning well for the party.

READ MORE: Brexit is about to begin. Here’s what you need to know.

For one, Labour is currently split internally over what faction of the party ought to control its direction. It also discovers anew every day how unlikeable its leader, Jeremy Corbyn, is to the electorate. (He already lost a vote of confidence amongst his own MPs last year, but survived a leadership challenge). And, crucially for the Lib Dems, Labour has struggled since the Brexit referendum campaign to be convincing with regards to Europe. Labour officially supported the Remain camp, but Corbyn has long been a Eurosceptic, and was reluctant to campaign for the side his party favoured. Even now, in the early days of the campaign, Labour are concentrating less on Europe and more on health care and the economy. But if the question on the ballot is indeed again Europe—as May and Farron both hope—that waffling Euro stance gives the Lib Dems another foil against which to set its staunch pro-EU message.

The Lib Dems’ war chest has also been filled by a reported extra £1.6 million (CAD$2.78 million) within the first four days of the election call. Something similar has occurred with its membership tally. Within hours of May’s call for an election, the party reported that it had already added another 5,000 names to its membership list in anticipation of the campaign. By Monday, an additional 7,500 had joined them, and the party said then it would soon surpass 100,000 members.

That membership figure is worth dwelling on. It’s not merely a campaign boast publicized to suggest momentum for a party that, outside of elections and its brief time as part of a coalition government after the 2010 election, is largely ignored. If not literally significant in the long run, the membership count is at the least symbolic—a hint at what could be achieved, given what has been achieved in the past. It is just shy of the party’s highest membership total ever—101,768—which it attained in 1994, three years before it achieved its highest-ever seat count in the Commons.

That high-water membership mark coincided with a time when the party was shifting strategy, says Dr. Peter Sloman, lecturer in British politics at the University of Cambridge. In the 1990s, the Lib Dems moved away from an attempt to create “a uniform national swing to provide a breakthrough” towards focusing resources on constituencies the party saw as winnable.

This matters to this year’s election for two reasons.

First, to understand the Lib Dems is to understand a fault of Britain’s (and Canada’s) first-past-the-post electoral system—specifically, its tendency to not reflect the popular vote in legislative seats.

After a major collapse in the early half of the 20th Century, the then-Liberal party underwent a very slow rebuild until the late 1960s, when Jeremy Thorpe took over as leader. The youthful, charismatic, Oxford-educated Thorpe led the Liberals through three elections before being forced from his post amidst scandal. In the last of those elections, in October 1974, the Liberal share of the total vote rose to nearly 20 per cent. Five years later, the Liberals under David Steel grabbed 18 per cent of the vote share. Yet, in both cases that support translated into only a dozen or so seats.

Thatcher became deeply unpopular in the early years of her first term, but then as now, the opposition Labour party was in disarray and could not take advantage. Labour then, as now, was riven by an internal dispute between establishment left-leaning party members and some, including an essentially Trotskyist sect, who wanted to push the party to the extreme left. A group of Labour MPs decided the time was right for a centrist alternative.

The resulting new party, the Social Democratic Party, formed an alliance with the Liberals in the post-Falklands 1983 election. It was to be decisive—in the worst possible way. The SDP-Liberal alliance carried a full quarter (25.4 per cent) of the vote, putting it a mere 2.2 per cent behind Labour. Yet, that popular vote translated to just 23 seats for the alliance, while Labour won 209—a finish that is considered its modern nadir. In other words, despite deep support in spots, the Liberal-SDP alliance had no breadth.

Fast-forward to the 1990s, when the merged alliance—now called the Lib Dems—shifted strategy to targeting constituencies rather than shooting for broad appeal. The strategy worked. In 1992, with nearly six million votes and over 17 per cent of the vote share, the Lib Dems took 20 seats. Five years later, the party’s vote count and share of the vote both dropped, but it had a net gain of 28 seats.

And there it sat, hovering between 46 and 62 seats until 2015, the first election after the party agreed to prop up David Cameron’s 2010 Conservative minority. Which is why party membership for the Lib Dems matters for a second reason: They need people, everywhere, to become Liberal Democrats. The party needs to become more than a passing fancy. 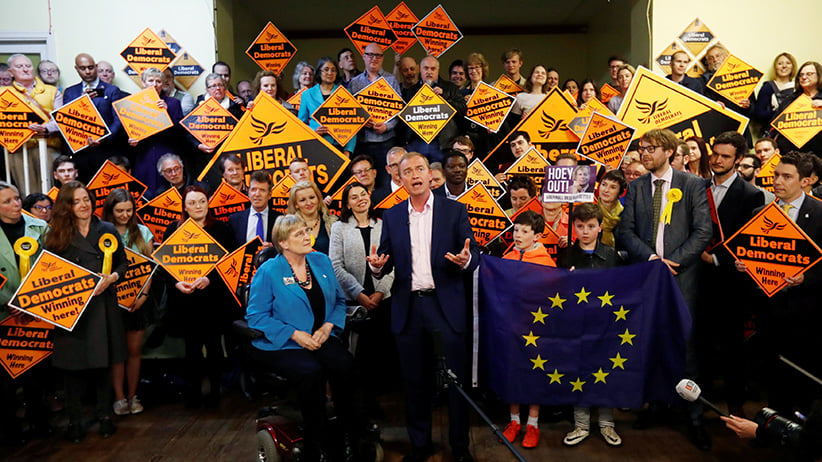 “The problem for the Lib Dems has always been [that] their positioning has often been centrist, but their support base is quite diverse,” says Sloman. In the landscape of U.K. politics, the party has found it difficult to ring-fence a core vote—the kind of voters that might identify personally as party adherents even outside an election. “So, even when you have a quarter of the electorate voting Lib Dem in 2005 [and] 2010, party identification for the party is still down at about 10 per cent,” Sloman explains.

The Lib Dems’ time as a coalition partner to the Conservatives in 2010 and the party’s reneging on its key campaign promise to abolish tuition fees did not help build that core voting bloc. Instead, it “took off a lot of that protest vote element; it took away a lot of tactical vote from left-wingers who would have voted for them in seats where the Labour party couldn’t win,” says Sloman.

Again in 2015, the party’s message was how it might balance out either a Conservative or Labour government. “The Liberal Democrats will add a heart to the Conservative government and a brain to a Labour one,” the party told voters. But by then few were listening. To Britain’s transient centrist voter, the hint of another coalition—and thus a Liberal Democrat party defined by either of the other two parties, rather than by itself—was enough to keep them away. The party lost 49 seats, putting it down to just eight in the House of Commons.

This is why its current message on Europe is key.

Since the last election, the Lib Dems have gained one more seat via a by-election. And that win offers some hope, says Joe Twyman, founding director of polling firm YouGov.

The Richmond Park by-election in London in December pitted incumbent pro-Brexit Conservative Zach Goldsmith (whose father, James Goldsmith, founded the Eurosceptic Referendum Party of the 1990s) against Liberal Democrat newcomer Sarah Olney and Labour’s Christian Wolmar. The seat has a strong Lib Dem past, but had been lost in 2010. That the Lib Dems won it back was important for the party’s image, but equally key because nearly 70 per cent of voters in Richmond opted for the U.K. to remain in the European Union in last year’s referendum.

“The Richmond by-election recently was an indication of how [the Lib Dems] could potentially galvanize Remain voters to come over to their side,” says Twyman.

Reports this week say the Liberal Democrat campaign manifesto will include a promise to offer Britons yet another referendum—this time on whether to approve the inevitable exit deal Theresa May strikes for Britain with the EU. “If they want, it will also be possible for the British people to choose to remain in the European Union,” Farron told The Independent. “Someone will have the final say over our new deal with Europe. It could be politicians or it could be the people. Liberal Democrats believe it should be the people in a referendum.”

But, of course, for there ever to be hope of making that possible—of being able to force the government to consider that plan—the Lib Dems need the votes to prove they speak for a significant portion of Britain, and the seats to go with it. But the math makes things look less rosy than the party’s financial bump, messaging, or even membership gains would suggest. As always, it matters where those members and voters are, and if they are in sufficient numbers in enough places to make a difference.

In the 2015 election, the Lib Dems came second in 70 constituencies, says Twyman, the YouGov pollster. In 16 of those, the party finished second by less than 10 per cent of the vote.

“Of those,” Twyman says, “nine are estimated to have voted Remain.”

There is a chance. Though it might be a long shot.