'Our people have their voice' 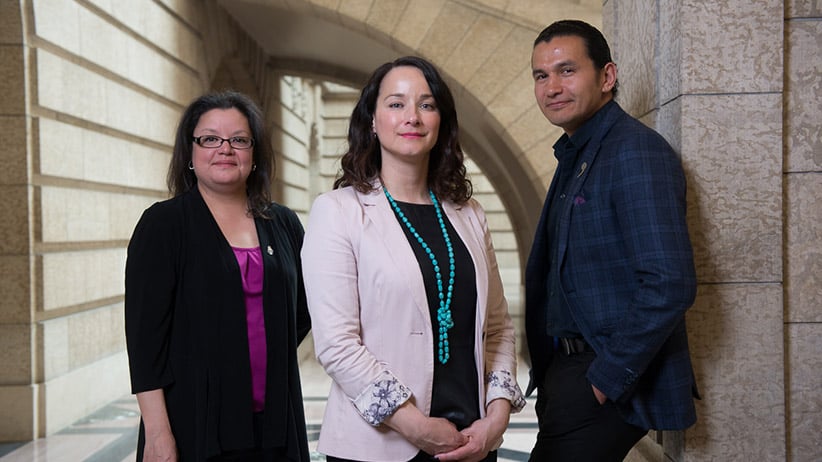 From left to right, Lathlin, Fontaine and Kinew. (Photograph by Thomas Fricke)

The mood was mainly sombre and the cash-bar business was mainly brisk as Manitoba New Democrats gathered April 19 in one of the mammoth RBC Convention Centre’s smaller rooms, to bid adieu to 17 years of NDP rule and Premier Greg Selinger, and watch the Progressive Conservatives’ crushing victories keep rolling in.

The young people clad in orange #ImWithWab shirts were in a more festive mood, cheering the video screen as broadcaster Wab Kinew was shown winning an inner-city Winnipeg seat. There was a similar buzz around fellow new MLA Nahanni Fontaine as she hugged her way through the crowd, clad all in white on her party’s grimmest night in decades.

There were two historic outcomes of the Manitoba election. Brian Pallister’s Tories captured 40 of 57 Manitoba seats, the party’s best result ever and the biggest provincial win in more than a century—a decisive mandate for lower-cost, leaner and business-friendly government. Meanwhile, amid the decimation of the NDP was something significant and also unprecedented. Four of the now-Opposition party’s 14 members are First Nations, a uniquely high proportion for an established party. With a race to replace Selinger coming, members have high hopes the NDP leadership could make further history.

Fontaine insists she wore white that night just because it looked nice, rather than as a nod to new beginnings. But she’s somebody who routinely finds deep meaning and symbol throughout life and daily activities. When she first announced her run for the NDP, she clutched an eagle feather. A generation earlier, one was in the hand of NDP opposition member Elijah Harper as he quietly protested the lack of Indigenous consultation for the Meech Lake accord. That 1990 act of legislative defiance was key in derailing Brian Mulroney’s attempted constitutional overhaul.

It’s fitting this new political core forms in Manitoba, whose rapidly growing Indigenous population makes up 16.7 per cent of the provincial total, four times the national average. Poverty and suicide are epidemic in its northern reserves. The cries for an inquiry into missing and murdered Indigenous women and girls reached peak volume after Tina Fontaine’s murder in Winnipeg in 2014. And the capital city—with Canada’s largest urban Indigenous community—continues to tackle the sting of systemic racism, as the city’s first Metis mayor, Brian Bowman, declared 2016 a year of reconciliation. In Winnipeg’s predominantly Aboriginal and predominantly poor North End, the community’s latest weekly anti-violence gathering, Meet Me at the Bell Tower, had in the crowd at least two of these Indigenous MLAs: Kinew and Kevin Chief, the now-former jobs minister.

Nahanni Fontaine, the ousted government’s adviser on Indigenous women and herself a survivor of sexual abuse, was joined by families of missing and murdered women at her campaign office before joining the NDP wake on election night. As they huddled tightly in a circle, Fontaine vowed to continue supporting the relatives, even as her new job as MLA requires her to expand her concerns to matters like potholes and health care. “How that looks, I’m not sure,” she tells Maclean’s, a couple of days later, wiping away tears. The polls had made it clear to Fontaine and others the NDP was bound for opposition, but if the party must rebuild, having so much Indigenous knowledge and experience around her party’s smaller table brings, to her, one of the best possible foundations.

“I just feel that we’re at such a beautiful but hard time in Manitoba, in Canada. And I say beautiful because our people are reclaiming their space. Our people have their voice,” Fontaine says. “And yet you juxtapose that: there are still real issues. The suicide epidemic across Canada. That’s a sense of hopelessness and dislocation—I was once there in my life. I realize the dichotomy in which we’re in: it’s a beautiful time, and yet the struggle is [profound].”

The downsized caucus met for the first time April 26; along with two Filipino MLAs and one Sikh, the NDP is half non-white. Amanda Lathlin of The Pas was elected in a by-election last year as Manitoba’s first Indigenous female MLA—now along with her “Aboriginal sister” and fellow single mother Fontaine, and a newly elected Liberal member in the north, there are three. “We are reaching that goal to have our people be the key players, the frontline players now,” Lathlin says.

Politically, as well as historically, things managed to fall into place to create this unusual moment. After an internal collapse in faith in Selinger, when he broke a promise and raised the PST, several NDP veterans chose not to run again, opening up inner-city seats for Kinew and Fontaine. That coincided with the arrival of the “third real wave” since Indigenous people were first allowed to go to university in the 1960s, says Niigaan Sinclair, the Native studies department head of the University of Manitoba. In the first wave, Aboriginal leaders became lawyers, like Phil Fontaine and Murray Sinclair, chairman of the Truth and Reconciliation Committee and now a senator (and the academic’s father). In the 1980s, people became doctors and teachers. “Now we have people who are entering all sectors, public and private sectors of Canada,” Niigaan Sinclair says. “It’s just the time.”

In the federal election, frustration with Stephen Harper’s Conservatives and the rise of Idle No More sent Indigenous voter turnout surging in cities and the North, helping Liberals nearly sweep Winnipeg. Yet for all the talk of more Indigenous representation helping with voter engagement, provincial turnout was down in several Indigenous-rich areas, Sinclair notes. Time may have come for the rising political class, but still many don’t feel involved.

With the defeat of Aboriginal and northern affairs minister Eric Robinson, a provincial politician since 1993, Manitoba’s First Nations MLAs are all in their 30s and 40s—without living memories of residential schools. (Lathlin calls herself an “intergenerational survivor.”) However, the current Manitoba NDP president is Ovide Mercredi, former national chief of the Assembly of First Nations, who rebuffed past offers to run federally and provincially before accepting this new role at Selinger’s urging. He sees his past AFN role now as that of “grievance leader.” Even in opposition, Indigenous MLAs are in the system and will be listened to, Mercredi says. “You can’t be totally ignored. In my case, they would say, ‘You’re just talking rhetoric again; there you go condemning the country.’ ”

While Selinger touted his government as a leader on reconciliation and the missing and murdered women file, Pallister—whose caucus includes two Metis members—has made few promises on his direction, and never embraced plans for a national inquiry. His Tories had been critical of Manitoba’s practice of placing children in provincial care in hotels, and before the election joined the legislature’s unanimous backing of a bill that commits Manitoba to act on the Truth and Reconciliation Commission’s recommendations.

“They may pick and choose what they implement,” Kinew says. “To be honest, it would probably be the same pick-and-choose around any political party forming government. But I personally believe Murray Sinclair is smarter than all of us, so maybe we should follow his roadmap.”

As Kinew went door-to-door on the campaign’s final day, he met A.J. Chemin, a nurse who owes his education to Metis organization support. He wasn’t likely to vote NDP because of distaste for Selinger, but wished Kinew well: “It’s nice to see us getting into the field, finally. Makes us proud.”

Kinew began his campaign as an NDP star, but opponents’ airing of his misogynistic and crude past tweets and rap lyrics brought him the “controversial candidate” moniker. After besting the Liberal leader for his Winnipeg seat—in a mainly non-Indigenous district—the former CBC Radio host is touted as a possible contender for the NDP helm, but acknowledges he has much to learn about politics and still has long-term goals of running federally (after rebuffing NDP and Liberal offers last year) to pursue constitutional change. A more probable and less contentious option to replace Selinger is Kevin Chief, who has served as a minister and has wide respect for his organizing chops.

Kinew says he was skeptical about how far someone like himself could go until Barack Obama did it, though he saw the Tea Party rise in response. Not everybody in Manitoba so embraces the ideas of reconciliation. “On one hand it will increase the symbolic power and the inspiration that comes along with it, but I think there will also be an attendant increase in racism and backlash,” he told Maclean’s.

Carole James, a Metis woman, led the British Columbia NDP for six years until 2011, while one of Manitoba’s first premiers, John Norquay, had Metis ancestry. But a major provincial party leader of First Nations origin could be ground-breaking, coming from a community that for most of Canadian history didn’t have voting rights. That would put into contention the chance for a Manitoban Indigenous premier. “It’s been years and years in the making, and we’re at this historical moment where people’s spirits and minds and emotions are open,” Fontaine says. She says she’d be shocked if the party’s next leader isn’t Indigenous. A lot can happen in four years of politics, and it’s not just Manitobans and Indigenous Canadians who should be watching what this new political crew can accomplish.