9 clues in the Queen's statement about Harry and Meghan's future

It would seem the Queen believes Harry and Meghan can't be half-in, half-out and will become private citizens 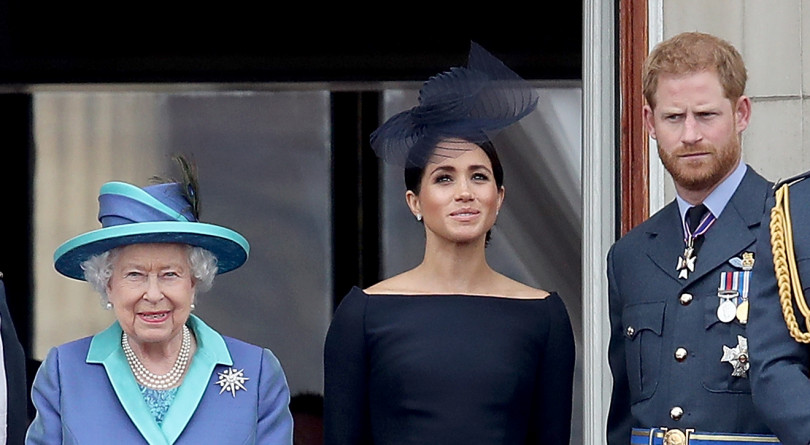 The statement from Queen Elizabeth II arrived in media inboxes a few minutes before its embargo of 5 p.m. British time ended. The timing was no coincidence, coming shortly after the family members who had gathered at her Sandringham home departed after discussing with Prince Harry the parameters of how he and Meghan were going to retreat from their senior roles as working royals. Given that the press is camped outside the private Norfolk estate, royal officials knew they had to make a statement.

READ: Prince Harry and Meghan Markle vs. the royal family

The result, however, was unlike any previous one issued by the 93-year-old monarch, who is about to reach her 68th year on the throne. It may be just six sentences long and composed of 153 words, but it does contain myriad clues and signals to the future of the Duke and Duchess of Sussex and their roles within the family.

Today my family had very constructive discussions on the future of my grandson and his family.

My family and I are entirely supportive of Harry and Meghan’s desire to create a new life as a young family. Although we would have preferred them to remain full-time working Members of the Royal Family, we respect and understand their wish to live a more independent life as a family while remaining a valued part of my family.

Harry and Meghan have made clear that they do not want to be reliant on public funds in their new lives.

It has therefore been agreed that there will be a period of transition in which the Sussexes will spend time in Canada and the U.K.

These are complex matters for my family to resolve, and there is some more work to be done, but I have asked for final decisions to be reached in the coming days.

Here is what we believe the message conveys:

1. We are all still family

The Queen is a formal woman born in a formal era. She doesn’t “do emotion,” at least not in public. Her speeches are stripped of any hint of politics, and her official sympathy messages follow a diplomatic format rarely broken. Yet this message is both personal and intimate. She doesn’t use “the Duke and Duchess of Sussex” but “Harry and Meghan” (more on that in No. 9). She makes reference to “family” eight times, driving home the message that while the situation may be garnering headlines around the world, this is still, fundamentally, a painful dispute within a family.

Anyone hoping for an instant agreement was disappointed. Not only were Harry, father Prince Charles and brother Prince William at the meeting, but Meghan was a phone call away in Canada. And, as this affects the monarchy, their private secretaries were also present, but so, too, was the private secretary of the Queen along with other royal officials. According to reports, though the Queen met with Harry and the rest of her family at Sandringham, she and her husband, Prince Philip, left the nuts and bolts of the big decisions to Charles and William. As well, the Canadian and British governments needed to be apprised of the negotiations and the costs involved. Still, the Queen has set an ambitious timetable for the decisions to be finalized, in part to staunch the deluge of media attention.

3. Can everyone stop talking about a family feud, please?

Before the meeting, Prince Harry and Prince William issue a joint statement denying tabloid reports that Harry was feeling bullied out of the royal family by his older brother, stating that, as the siblings “care so deeply about the issues surrounding mental health, the use of inflammatory language in this way is offensive and potentially harmful.” Now, the Queen is attempting to put that matter to rest, stating that she and her family are “entirely supportive” of the Sussexes’ “desire to create a new life as a young family.”

4. There’s no going back

Any thought that the royal family could make enough concessions to satisfy the demands of the pair and still keep them as full-time working royals has now been ruled out. And it’s clear that the family wanted them to stay integral parts of Charles’ slimmed down monarchy. Now the pressure is on William and Kate to fill in the gap as the only young royals of their generation working as full-time royals.

5. Harry and Meghan’s “half in-half out” option is DOA

The Queen may have thrown “respect and understand” into the sentence, but it seems likely that this phrase, “live a more independent life as a family while remaining a valued part of my family,” means the Sussexes are about to transition from working royals doing their duties on behalf of the monarch to the larger group of the Queen’s relations who are private citizens, albeit belonging to a famous family who still gather regularly for big events, such as jubilees and birthdays. Those Windsors have jobs and can accept commercial relationships, as they don’t represent the monarchy. In addition, they have their own charitable endeavours, such as the Anti-Slavery Collective, of which Princess Eugenie is a co-founder. This is where it could get tricky. Will Harry and Meghan be able to continue with some of their high-profile positions, such as Harry’s role as captain-general of the Royal Marines, after they cease to be working royals? What about their top roles in the Queen’s Commonwealth Trust? This wording suggests that they won’t be the quasi-royals they hoped to be and some resignations are coming.

6. Sussex Royal is open for business

Harry and Meghan’s message last week, as well as their website supporting their decision, was packed with references to “financial independence,” though it was unclear whether that meant giving up the multi-million-pound aid they get every year from Prince Charles’s Duchy of Cornwall, an ancient estate designed to fund the heir to the throne and his family. Since then, a series of opinion polls have shown the public is heavily opposed to Harry and Meghan getting Duchy money, as well as funds from the Sovereign Grant, which funds monarchical operations. The Queen’s “they do not want to be reliant on public funds in their new lives” implies that the family’s purse strings are being tightened while also confirming their desire to strike business deals for themselves, including building up their Sussex Royal brand, as a way to fund much of their expensive life.

The Sussexes had made vague references to living in North America and the United Kingdom, but now the Queen of Canada has provided a much firmer confirmation that they will spent chunks of the immediate future in her northern realm. Right now, Meghan and their son Archie are in living in a huge mansion in North Saanich, B.C. Harry is expected to join them soon. The issue of who will pay their extensive security costs, now set to soar as they live in two countries, isn’t settled. Today, Finance Minister Bill Morneau told reporters, “We have not had any discussions on that subject at this time.” (The Prime Minister’s Office had no comment when asked about Harry and Meghan in Canada.)

8. Wrapping up their old lives

While the details of their new arrangement are sorted out, “a period of transition” will allow Harry (and maybe Meghan, if she returns to Britain), to continue with some royal duties. In fact, he has one engagement planned for Thursday, when, as patron of the Rugby Football League, he hosts the Rugby League World Cup 2021 draws for the men’s, women’s and wheelchair tournaments at Buckingham Palace. It will also likely mean layoffs and resignations among their staff, as most won’t want the peripatetic lifestyle now envisaged.

Using “Harry and Meghan” may have been a personal choice of his grandmother, but it also avoids any reference to the elephant in the room: their styles (His/Her Royal Highness) and title (Prince). If Harry and Meghan are plunging head-first into commercial agreements, as seems almost guaranteed, then there will be enormous pressure for them to either renounce their styles and titles or not use them in any commercial manner. Certainly those polls indicate Briton are against using royal honorifics for money. In 2016, when Princess Beatrice, elder daughter of Prince Andrew, used her royal title to market herself as a paid speaker, the backlash was intense.