Christmas with the royals: How to know who's up, who's down—and who's feuding 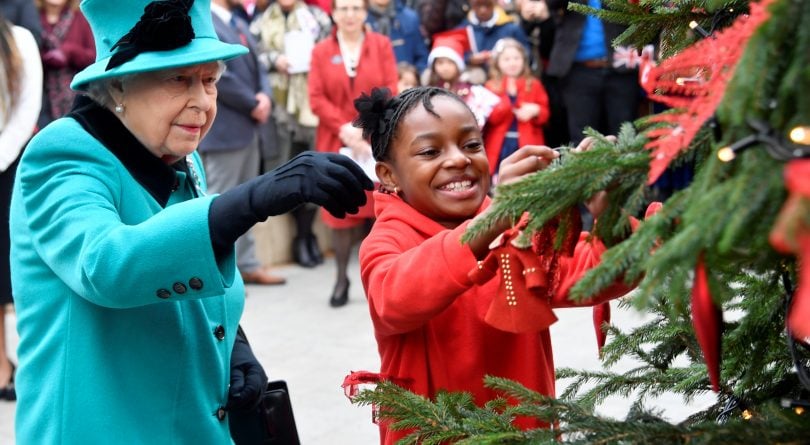 On Christmas Eve, the Queen’s family arrives en masse at the her private Norfolk estate of Sandringham. That day’s well-worn routine includes decorating the big house’s Christmas tree, opening presents (usually small, inexpensive items) and a formal black-tie dinner. Queen Elizabeth II so loves having her large, ever-expanding family (children, grandchildren and great-grandchildren, as well as the family of her late sister, Margaret) around her during the holidays that space is at a premium and some bunk down in temporarily vacated staff quarters.

It also offers a rare treat to royal watchers, for there are just a few opportunities each year to see the Queen together with most of her family, including Trooping the Colour, Commonwealth Day and Remembrance Sunday. But watching the them on Christmas Day going to and from morning service gives spectators a chance to see them up-close and relaxed.

Royal fans looking to get a handshake, a quick chat or a photo know to get to the estate early to grab the best spots on the well-marked walking route between Sandringham House and St. Mary Magdalene, the 16th-century church on the Queen’s estate where she and her guests worship. It’s usually a time to see the royal women decked out in their seasonal uniform of fashionable hats and coats, often with boots and gloves, as they balance style with the need for warmth and the ability to walk the short distance.

Christmas Day is also the best opportunity to indulge in a bit of royal Kremlinology—which individuals have become close, which ones have had a falling out, and what trends are emerging in the House of Windsor hierarchy.

So, here are a few things to consider when watching the royals all bundled up in chilly Norfolk on Dec. 25:

Who is there, who isn’t: While Christmas Day traditions have changed over the years—they were once held at Windsor Castle until that massive fortress proved too small for the Queen’s expanding family, and so the royals switched to spending the holiday at Sandringham—certain things are constants. As the Queen is a deeply religious woman (and supreme governor of the Church of England), everyone is expected to go to church on Christmas Day, except for small children (once royal kids are around the age of eight, they join the adults in worship).

Two years ago, the cynosure of the world’s media was the woman who wasn’t there: the monarch herself. “Her Majesty the Queen will not attend church at Sandringham this morning,” a palace spokesperson announced early on Dec. 25, 2016. “The Queen continues to recover from a heavy cold and will stay indoors to assist with her recovery. Her Majesty will participate in the royal family Christmas celebrations during the day.” Media editors went to regal DEFCON 4 a week later when she again cancelled her appearance at church, again blaming her continued cold. Only her re-appearance at St. Mary Magdalene on a subsequent Sunday tamped down the alarm.

Christmas Day is also one of the few times that her husband, Prince Philip, appears in public, after the 97-year-old duke retired from full-time royal duties last year.

The biggest speculation this year is whether the Fab Four (William, Kate, Harry, Meghan) show up. Prince William and Kate, Duchess of Cambridge, have a large house on the Sandringham estate but have fallen into the practice of spending every second year with her family, the Middletons. The last time they spent Dec. 25 with Kate’s parents was in 2016. They were at Sandringham last year and walked to church with Prince Harry and his then-fiancée Meghan Markle. (Normally, non-royals aren’t invited to stay at Sandringham for Christmas, but the Queen made an exception for her grandson’s bride to be.)

RELATED: It’s been the year of Meghan Markle—and what a year it’s been

Now, 12 months later, amid reports of tensions between the brothers and their wives, there’s speculation as to who will show up for the much-photographed Christmas morning church service. If the Cambridges and Sussexes both attend, eagle-eyed reporters and photographers will watch for any hint of strain between the couples. (They’ll also double-check if Harry takes part in the annual Boxing Day pheasant hunt, or whether he backs out, reportedly at the request of animal-loving Meghan.)

Bonus: this year, there’s speculation that Meghan’s mother, Doria Ragland, has been invited to Sandringham so that she and her pregnant daughter, who are famously close, can be together during the holidays. Though relatives, including the Middletons, are usually invited to church on subsequent Sundays, no one would be surprised if Doria Ragland were to show up at church on Christmas Day.

Who goes to the early communion service, and with whom: There are actually two royal church services on Christmas Day. Early that morning, before the main service, the family goes to St. Mary Magdalene for a private holy communion. For that event, their dress is a bit more informal—there’s a bounty of wool shawls and thick scarves instead of hats, while the Queen usually dons a fur coat. Still, the service, and photographs of who is chatting with whom as they walk is an early guide to who will show up for the bigger, more public service.

Who travels with the Queen to church: While everyone, including Philip, walks to church, the Queen is driven by her royal chauffeur. Sometimes she arrives alone; other times she is accompanied by a royal lady. Two daughters-in-law who have arrived in style include Camilla, Duchess of Cornwall, who went last year, and Sophie, Countess of Wessex, in 2010.

This year, it could be Meghan, who will be around six months pregnant.

Who walks with whom: While the family seems to automatically arrange itself into the line of succession at most functions, the system breaks down a bit on Christmas Day. The Queen and Prince Philip may be first to leave the church, followed by Charles and Camilla and then his sons and their wives, but the order often collapses on such a family occasion, allowing everyone a good opportunity to watch the royal family’s internal dynamics. Depending on the year (and the weather), Princess Anne will stride with her father, Prince Philip, while her vivacious daughter, Zara, and her husband, Mike Tindall, joke and laugh with her cousins, William and Harry, as well as princesses Eugenie and Beatrice, Prince Andrew’s daughters. Who walks briskly and who stops to chat with spectators also varies depending on the year.

The unexpected: Something unanticipated often happens on Christmas Day. Last year, a spectator named Karen Anvil used her iPhone to snap the best image of the day, a now-classic photo of the Fab Four, smiling and looking relaxed. After she posted the image on Twitter and it went viral, she was overwhelmed with queries about using it. Professional royal photographers at Sandringham to record the church arrivals and departures helped Anvil get a contract with a photo agency. The money she made, and continues to make, from that one iconic image is enough that her daughter doesn’t need a part-time job while attending university.