Does the documentary on Harry and Meghan show a 'new way of being royal'?

The prince and duchess share personal, and at times raw, reflections on their experiences in the media's spotlight 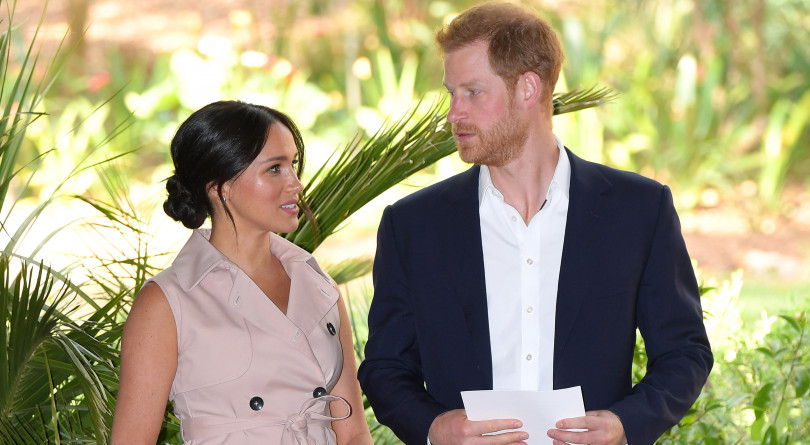 Meghan, Duchess of Sussex and Prince Harry, Duke of Sussex attend a reception to celebrate the UK and South Africa’s important business and investment relationship at the High Commissioner’s Residence during their royal tour of South Africa on October 02, 2019 in Johannesburg, South Africa. (Karwai Tang/WireImage/Getty Images)

On the penultimate day of their tour of southern Africa earlier this autumn, Prince Harry and Meghan, Duchess of Sussex, poured acid onto what had been a wildly successful visit on behalf of the British government. The news that Meghan was suing the Mail on Sunday tabloid for printing her letter to her father, accompanied by an emotional statement from Harry, who accused the media of bullying his wife as they had his mother, overwhelmed their subsequent visits to local dignitaries and organizations.

Two days later, Tom Bradby, the anchor of News at Ten on ITV, published a cryptic tweet: “Just finished filming a documentary on Harry and Meghan in Africa. I think it will explain a lot when it airs.” That is an understatement. As Richard Palmer, royal correspondent for the Express, tweeted: “Tonight’s documentary will go down as a landmark and intensify questions about whether Harry and Meghan can cope with the pressures of life as high-profile members of the royal family.”

Much of Harry and Meghan: An African Journey, which aired on Britain’s ITV network on Sunday (a version will be seen on ABC in the United States on Oct. 23 at 10 p.m.) focuses on the nuts and bolts of their tour, often using the accompanying media coverage to shine a spotlight on the causes and organizations they are visiting, which are “doing unbelievable things,” as Harry told Bradby. After they took their baby, Archie, the son of a British prince and a woman of colour, to meet Archbishop Desmond Tutu, the icon of the anti-apartheid movement, Meghan revealed, “It’s not lost on us what a huge and significant moment it is… Archie was fortunate to have this moment with one of the best and impactful leaders of our time.”

But those royal moments are not what most viewers will remember in years to come. And many of those who turned in to watch the documentary knew what was coming because a few days before, ITV had released several explosive moments from the documentary that revealed the raw emotions of the couple. Just like that “lawsuit” day that ended the southern Africa tour itself, the couple’s comments had turned the focus from their causes onto themselves.

In another, Meghan looks close to tears as she reveals the impact of all the pressures she’s been under, telling Bradby, “especially as a woman, it’s really, it’s a lot. So you add this on top of just trying to be a new mum or trying to be a newlywed, it’s um… Yeah, well, I guess, and also thank you for asking, because not many people have asked if I’m OK. But it’s a very real thing to be going through behind the scenes.”

Listen to Patricia Treble talk about the documentary on The Big Story podcast.

There were more intimate revelations in the hour-long royal documentary, one of the most personal ever made. When asked if his open, even raw, comments to Bradby is the new way of being royal, Prince Harry responds, “We’re trying to do what feels natural to us, to be authentic.”

Harry confirms what the tabloids and mainstream papers had reported for months: he and his brother are no longer close. “Inevitably, stuff happens,” he says. “We’re brothers; we’re on different paths. We don’t see each other as much as we used to.” Yet while he discounts most of what is published about their relationship, he does admit that “as brothers, you have good days, you have bad days.”

RELATED: William and Kate walk the fashion line between diplomacy and dress-up

He also talks about his own mental health issues, which the prince and his brother, Prince William, have been open about, especially in the years after the death of their mother when they were children. “I thought I was out of the woods, then it came back,” Harry says, adding that he needs “constant management.” He continues, “I will not be bullied into playing a game that killed my mum,” alluding to the intense media pressures faced by Diana.

Meghan echoes Harry’s concerns. “It’s not enough to just survive something,” Meghan says she’s told “H,” as she called her husband, for a long time. “You have to thrive, to be happy.”

On that last day in South Africa, she told Bradby that her British friends warned her against making her relationship with Harry permanent, telling her, she recounted, “You shouldn’t do it; the British tabloids will destroy your life.” (Unlike Kate Middleton, who spent years in the harsh spotlight as the girlfriend of Prince William before their engagement in 2010, Meghan plunged into royal life, having never lived in Britain with her prince before their own engagement.)

RELATED: Prince Harry must decide what kind of royal he wants to be

But Meghan didn’t stop there, making two comments that appeared aimed squarely at Harry’s family. “Not many people have asked if I’m OK,” seemed to be a dig directed at the royal family itself, which was accused of ignoring Diana’s travails in the 1980s. As well, she said that she tried adopting the British “stiff upper lip” ethos but thinks “what that does internally is really damaging.” The epitome of that ethos is the Queen and her family.

“What will the Queen make of Harry and Meghan’s Panorama-like outpouring?” was the headline in the Telegraph, as former royal correspondent Camilla Tominey attacked the couple by referring to Diana’s bombshell interview in 1995, when she presented her side in her bitter fight against Prince Charles, from whom she’d been separated for three years. Now widely seen as a mistake on Diana’s part, it was so inflammatory that it caused the Queen to write to the couple demanding they divorce. “By appearing to suggest that she can no longer continue in the royal family as it stands, Meghan appears to be not only casting aspersions on the British tabloids but also the Firm she married into,” Tominey writes.

The day Bradby’s documentary aired in Britain came word that Harry and Meghan are taking an extended time off—likely around six weeks, to be spent partly in the United States. That time away from royal duties could help them decide their future.

Harry and Meghan are a couple who “feel themselves on a moral mission” to change what they feel is wrong, Bradby stated in the documentary. As Harry said on the last day of their tour, after the lawsuit was announced: “We will firmly stand up for what we believe.” But by allowing the world to see their private emotions, thoughts and doubts, the attention may only intensify.