The Queen is used to thin-skinned megalomaniacs. She can deal with Trump. 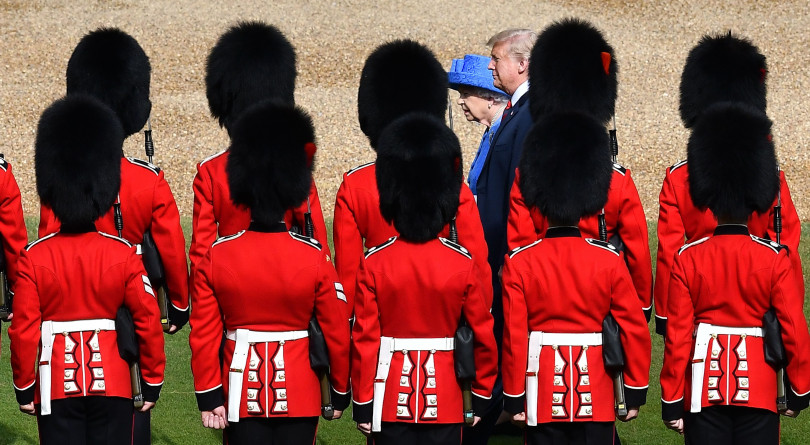 U.S. President Donald Trump will fly to London on Air Force One for a two-day state visit to Britain. Given he’s a president who repeatedly goes off-script, the unexpected is expected, regardless of how minutely the veteran royal household staff plan for such formal events. His brief stop at Windsor Castle last year generated negative headlines as well as must-see videos and memes when he awkwardly stepped in front of the Queen and then stopped, looking around, clearly unsure where to go until she was able to get him back in the needed position to inspect a row of troops. Even the White House’s announcement of this state visit spawned negative comments as it invented a new title, “Her Royal Majesty,” for the Queen even though she’s had the same one (Her Majesty, for the record) for some 67 years. In addition to his wife, Melania, he’s bringing along all his adult children and their spouses.

It’s easy for such an etiquette-drenched state visit to go off the rails, especially when the guest is someone who won’t read the detailed briefing books created for such visits (Trump prefers pictures and graphics). Yet the one person who will handle whatever happens with a professionalism born of more than six decades of such formalities is likely less bothered by the snafus and missteps that often follow in the President’s wake. Queen Elizabeth II can handle Donald Trump. She has had worse heads of state come to call. Far worse.

Asked to list the worst visits to Britain of the current monarch’s reign, royal author Robert Hardman points to three that “the Queen would most like to forget.” All involved thin-skinned megalomaniacs with an overweening sense of their importance. And all occurred in the 1970s, when Britain’s economy was struggling and its government was desperate for foreign trade and alliances.

Perhaps the most uncomfortable occurred in 1973 when Mobutu Sese Seko of Zaire stayed at Buckingham Palace. The despot was so corrupt and mentally unbalanced that polite conversation was all but impossible. Then the Queen discovered that not only had his wife smuggled a dog into the nation, which had strict animal quarantine rules, but was asking the palace kitchen to prepare a steak for its meal. Famously devoted to her dogs, the Queen “went ballistic,” Hardman says. “Get that dog out of my house!” she told one member of her staff. “She really was shaking with anger,” recounted Martin Charteris, then her private secretary, to Hardman in Our Queen, one of the author’s richly detailed books that explore the behind-the-scenes realities of royal life in palaces and castles

A few years later, Nicolae and Elena Ceauşescu moved temporarily into the Belgian Suite of Buckingham Palace, where most visiting heads of state stay. Like all visits, it was at the request of the British government, which needed it to finalize a big commercial contract with Romania. It quickly went off the rails with an unending series of demands, including having a coterie of 55 loyal Romanians stay at the palace (that was rejected, as not even a building as huge as Buckingham Palace has that many free bedrooms.)

Even the Ceauşescus themselves were dangerous, warned the French president, Valéry Giscard d’Estaing. During their visit to the Paris, the couple and their staff completely stripped their historic accommodations of anything that could be unscrewed or stolen, including the bathroom fixtures. In addition, the paranoid Romanians had punched holes in the walls looking for bugging devices. A concerned Elizabeth II ordered anything of value removed from the Belgian Suite. Meanwhile Foreign Office bureaucrats were frantically trying to fulfil Elena Ceauşescu’s wish for an academic honour. But institution after institution turned down the request on behalf of a vain, spiteful woman. (Finally, the Royal Institute of Chemistry and the Central Polytechnic of London stepped up.)

READ: Queen Elizabeth II is 92—and yet her workload seems to be increasing

But none of those concerns showed during the visit itself as the Queen and her family ignored their personal feelings about “that frightful little man,” as she later described Nicolae Ceauşescu. “No corners were cut in either dress or formality,” Reginald Secondé, the British ambassador to Romania, told Hardman in Queen of the World. “Our star rides high and it is conceded all round that, when it comes to state visits, Britain has a secret weapon that no one else can match.”

The visit by the third atrocious guest was the shortest. In 1971, though the British already knew of Idi Amin’s horrific human rights abuses in Uganda, they still readily fell in line when he came to London hoping for a lunch with the Queen. It would prove to be one of the most memorable of her reign. Amid the chitchat, Amin confided in Elizabeth that he wanted to invade neighbouring Tanzania to grab a land route to the Indian Ocean. At that time, Tanzania was led by Julius Nyerere, whom the Queen considered a friend and close ally within the Commonwealth. Though the Queen is famously close-mouthed about her conversations, this news was so alarming that she made sure the Foreign Office was told so it could warn Nyerere.

Trump will face protesters for his visit, such as those who demonstrated when President Xi Jinping of China came in 2015, but this time they will find it a bit harder to get their message across as most events will take place in historic venues, well away from crowds. Unlike Xi, Trump won’t get to sit beside the Queen in a gilded state coach as they proceed down the Mall to Buckingham Palace. To meet security demands, Trump, like previous presidents, will instead be welcomed in the safe confines of the gardens of Buckingham Palace. That’s also why the American head of state will stay at the U.S. ambassador’s residence rather than Buckingham Palace. That’s perhaps for the best, for, while the Belgian Suite has a big flat-screen TV that Donald Trump would like, its two old-fashioned bathrooms aren’t ensuite, but rather located across a corridor.

As for subtle hints that the trip is going well, or not, Robert Hardman advises to look at the timing of the events on both days. It’s a good sign if events run a bit over their allotted slots, such as happened when the Trumps had tea last year at Windsor Castle. Relentless punctuality? Not so good.

The Queen may not be effusive in showing her feelings, as she was when Nelson Mandela came in 1996, but she’s certainly not going to display any displeasure, in any way. So everyone but royal jewellery enthusiasts can safely ignore her choice of brooches. That annoying “broochgate” theory that got so much attention last year is likely to rear its ugly head on this visit. Don’t believe it. There is absolutely no proof that the Queen has ever “brooch-trolled” anyone during her 67 years. Though for the conspiracy minded, there’s one accessory that the Queen could wear to prove she is indeed trolling Trump: a USS John McCain hat.