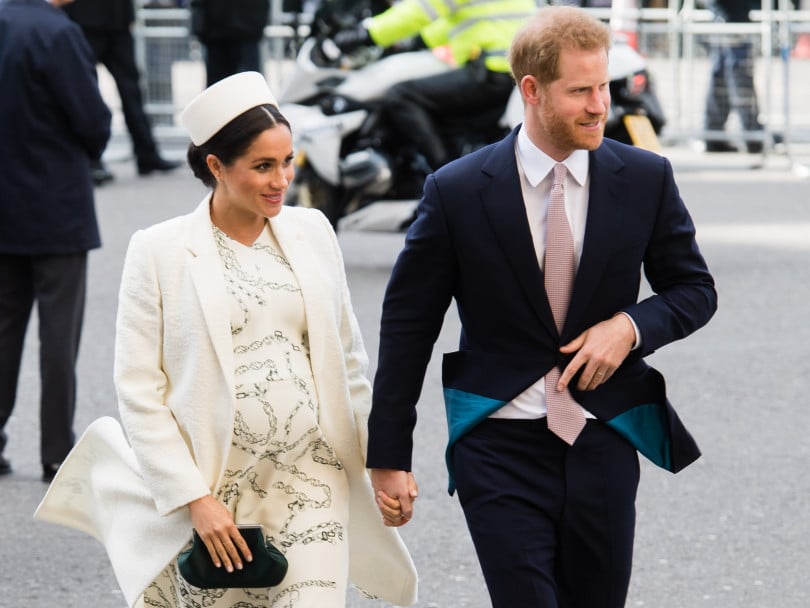 Harry and Meghan’s baby will have a starkly different life than that of his or her cousins, one which will allow the newest member of the House of Windsor to follow a path free of the many strictures that automatically narrow the futures of those near the top of the line of succession. Their baby will be a non-royal royal, with many of the benefits inherent in being part of the House of Windsor yet likely without having to become a full-time working royal.

So while the children of Prince William and Kate, Duchess of Cambridge, move closer and closer to the centre of royal power when their grandfather and then father become monarchs, the children of Prince Harry, now sixth in line to the throne, and Meghan, Duchess of Sussex, will inexorably move in the opposite direction, especially as their Cambridge cousins marry and have kids of their own, pushing the Sussex offspring down the line of succession. And that will give the Sussex children carte blanche to carve out lives that suit them, rather than hewing to a life of public duty and responsibility.

It’s a simple fact of royal life, one that occurs generation after generation.

READ: Will Meghan Markle go glam for her first appearance with her new baby?

Back in the 1980s, there were two superstar royal couples: royal brothers Prince Charles and Prince Andrew and their wives, Diana, Princess of Wales, and Sarah, Duchess of York. Charles was the future king; Diana, a beautiful, warm aristocrat. Andrew was the dashing military helicopter pilot who had served with distinction in the Falklands War; Sarah the effervescent redhead determined to do things her own way. Their foreign tours were hugely successful, their every move was followed and examined by fans devoted to the royal luminaries. Virtually every recent headline regarding today’s Fab Four—William, Kate, Harry and Meghan—are echoes of the ones from that era.

For years, Andrew was fourth in line to the throne, behind big brother Charles and his sons, William and Harry. Flash forward three decades and Andrew will soon step down another succession rung, landing in the eighth spot when the Sussex baby arrives. Images of the rapturous crowds that greeted Andrew and Fergie on their royal tours have faded. The couple is divorced (so happily that Sarah lives with Andrew), and the Duke of York is very much a second-tier royal. His schedule is still busy—he undertook more than 400 engagements in 2018—but the adulation once so prevalent has subsided now that he’s 59. Andrew and Sarah’s two daughters have royal styles and titles (Her Royal Highness Princess Beatrice and HRH Princess Eugenie) but aren’t full-time royals. Instead, they work for a living: Beatrice is a business executive, while Eugenie is a director at a London art gallery.

The same thing happened with the previous generation. In the 1950s and 1960s, it was Queen Elizabeth II’s sister, Princess Margaret, who captivated the world with her glamorous lifestyle. Now, the late princess’s two children are 20th and 23rd in line of success; David Armstrong-Jones, now 2nd Earl of Snowdon, created a high-end furniture and design firm, Lady Sarah Chatto is a well-regarded artist.

Today, Queen Elizabeth II and Prince Charles are streamlining the royal family even more, limiting future working royals to those in the main line of succession. So when the Queen’s cousins and her younger children retire from royal life, their children will not take their places as working royals. They are still family, albeit with lots of royals as relatives, and will continue to appear at large family events such as Trooping the Colour and Royal Ascot. But they are not be part of “the Firm,” the working section of the royal family, whose efforts appear in the Court Circular, the official record of royal life.

RELATED: Prince Harry and Meghan Markle’s baby and the long arm of the IRS

And that future as a non-royal royal seems to be what Harry and Meghan want for their child. They’ve just moved to Frogmore Cottage, located in the countryside privacy of the sprawling estate at Windsor Castle. The Frogmore estate is where generations of royals have picnicked, learned to ride a bike and enjoyed life away from public view.

Like William and Kate’s country home of Anmer Hall, nestled on the Queen’s Sandringham estate, where the family lived until their children reached school age, Frogmore Cottage will allow the Sussex family to live well away from the intrusions of smartphone cameras and the paparazzi. Though the mainstream media has obeyed unwritten rules to leave royal children alone, that agreement never been observed by aggressive paparazzi eager for foreign sales.

And, unless the Queen changes the rules regarding royal styles and titles (Maclean’s more detailed explanation is here), Harry and Meghan’s baby will not be saddled with a royal title, but will take a title from his dukedom—so a boy would likely be known as the Earl of Dumbarton and a girl would be Lady [first name] Mountbatten-Windsor. That follows the recent precedent set by the children of Prince Edward, the Queen’s fourth child, and Sophie, Countess of Wessex. Though their young children are technically entitled to be called prince and princess, their parents reportedly decided not to burden them with the titles, knowing such monikers would make it difficult to establish themselves as private citizens, especially as their link to the throne grows more tenuous over time. So their elder is Lady Louise Mountbatten-Windsor and their younger child is James, Viscount Severn.

Princess Anne famously stated that her untitled children just have a grandmother who is the Queen. They were never expected to be full-time royals, never assumed to have the same responsibilities as their cousins. Such freedom means Harry and Meghan’s child can become anything under the sun…farmer, mental health worker, statistician, cook. Anything. And that is surely better than a royal title.