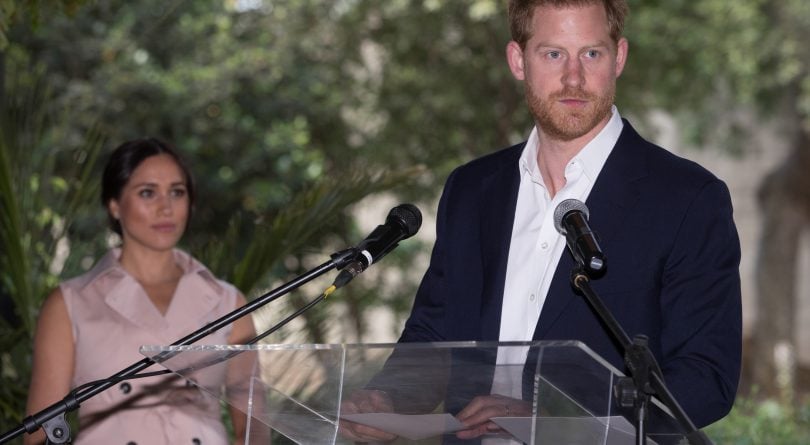 Prince Harry, Duke of Sussex and Meghan, Duchess of Sussex visit the British High Commissioner's residence looking ahead to the Africa Investment Summit the UK will host in 2020 on Oct. 02, 2019 in Johannesburg, South Africa. (Photo by Pool/Samir Hussein/WireImage)

Meghan and Harry’s tour of Southern Africa was a hit. After months of on-and-off bad press, including criticism of their frequent use of private jets over the summer while also being outspoken environmentalists, and of their creation of a Sussex Royal brand, it seemed to mark a reset for the popular royal couple. The wall-to-wall media coverage was virtually all positive, though eyebrows were raised when the press noticed that they were using British SUVs; reportedly Jaguar Range Rover shipped four vehicles to South Africa because armoured vehicles there didn’t meet security requirements.

Eschewing the more formal dinners and events that are often part of such high-profile official visits, they spent their days promoting causes near to their hearts. After engagements in South Africa with Meghan, Prince Harry went to Botswana, Angola and Malawi, retracing the footsteps of his mother, Diana. In 1997, she walked through a field filled with landmines in Angola. Two decades later, Harry saw the results of demining efforts—the same locale has been cleared of deadly ordnance and was a thriving community. Staying in South Africa, Meghan focused on female entrepreneurship, youth mental health and employment.

The Duke and Duchess of Sussex revelled in their roles as proud parents, taking their smiling, squirming five-month-old son to see Archbishop Desmond Tutu, and Meghan told the Press Association that her schedule “is based around Archie’s feed times.”

MORE: Prince Harry must decide what kind of royal he wants to be

On the last day of their visit, Meghan gave an impassioned speech about gender-based violence, so prevalent in South Africa, where around 140 sexual offences occur daily and a woman is killed ever three hours. A few days before, she privately went to the post office where student Uyinene Mrwetyana was murdered, and the duchess tied a yellow ribbon among the many fluttering at the crime scene. Mrwetyana’s killing triggered mass demonstrations protesting the lack of protection for women.

In her speech, Meghan said, “I met a group of young girls yesterday who wanted to talk to me about their experience. Some of which was harrowing. Yet despite everything they had been through, they said the saddest thing was to watch the continued degradation of women, and that they wanted to be part of a movement where both women and men play a role in turning that around.”

Yet, that speech, and social effort, was overshadowed by the legal tussle back home. As Chris Ship, ITV’s royal correspondent, noted in a tweet, “This is what we would have reported last night, if not for this legal bombshell.”

And bombshell it was. On Oct. 1, a brand-new website, SussexOfficial.UK, revealed that Meghan was suing the Mail on Sunday tabloid, and its parent company, Associated Newspapers. In a press release Schillings, the firm representing Meghan, stated that the legal proceedings were “over the intrusive and unlawful publication of a private letter written by the Duchess of Sussex, which is part of a campaign by this media group to publish false and deliberately derogatory stories about her, as well as her husband. Given the refusal of Associated Newspapers to resolve this issue satisfactorily, we have issued proceedings to redress this breach of privacy, infringement of copyright and the aforementioned media agenda.”

MORE: Harry and Meghan’s baby will be a non-royal royal—and that’s a good thing

That news wasn’t unexpected. At the beginning of the year, the Mail on Sunday had splashed across its pages a letter that Meghan had written to her estranged father, Thomas Markle, in which she talked of the pain caused when he talked to the press and said things she believes are untrue. She begged him to stop talking to the tabloids, which he’s done repeatedly since her engagement to Harry was announced. Almost immediately, other publications reported that the Sussexes were considering legal action as, under British law, the copyright of the letter belongs to the writer, Meghan.

It wouldn’t be the first time such legal action was initiated by a royal. In 2006, Prince Charles won a privacy suit against the Mail on Sunday for infringing his copyright and confidentiality when it published extracts from his diaries regarding the handover of Hong Kong from Britain to China in 1997. More recently, Prince William and Kate, Duchess of Cambridge, won a privacy suit when a French tabloid published topless images of her sunbathing.

One of the most unusual parts of the legal announcement was that it didn’t occur after the tour ended. As royal commentator Victoria Arbiter said on NBC’s Today show, “For me, the timing is just so odd because here we are in Southern Africa, this tour has been a massive success… It’s been positive story after positive story, and yet this is what we’re talking about.” It’s been reported that the couple didn’t inform Buckingham Palace of their plans.

And accompanying the rather brief press release was an emotional statement from Prince Harry, who takes broad swipes at the media. “My wife has become one of the latest victims of a British tabloid press that wages campaigns against individuals with no thought to the consequences—a ruthless campaign that has escalated over the past year, throughout her pregnancy and while raising our newborn son. There is a human cost to this relentless propaganda, specifically when it is knowingly false and malicious, and though we have continued to put on a brave face—as so many of you can relate to—I cannot begin to describe how painful it has been. Because in today’s digital age, press fabrications are repurposed as truth across the globe. One day’s coverage is no longer tomorrow’s chip-paper. Up to now, we have been unable to correct the continual misrepresentations—something that these select media outlets have been aware of and have therefore exploited on a daily and sometimes hourly basis.”

He goes on to claim: “The contents of a private letter were published unlawfully in an intentionally destructive manner to manipulate you, the reader, and further the divisive agenda of the media group in question. In addition to their unlawful publication of this private document, they purposely misled you by strategically omitting select paragraphs, specific sentences, and even singular words to mask the lies they had perpetuated for over a year.”

In response, the newspaper stated, “The Mail on Sunday stands by the story it published and will be defending this case vigorously. Specifically, we categorically deny that the Duchess’s letter was edited in any way that changed its meaning.”

In his statement, Prince Harry raises the spectre of his mother, Diana, who was a target of the tabloids for years: “Though this action may not be the safe one, it is the right one. Because my deepest fear is history repeating itself. I’ve seen what happens when someone I love is commoditised to the point that they are no longer treated or seen as a real person. I lost my mother and now I watch my wife falling victim to the same powerful forces.”

Harry has every right to be protective of his wife, and of his mother’s memory. Yet it wasn’t the media who killed Diana, but a combination of Dodi Fayed’s drunk chauffeur speeding recklessly through the streets of Paris and Diana not wearing a seatbelt when they crashed into that tunnel pillar in 1997.

Certainly the British tabloids are infamous for being ruthless and vicious, especially when they smell scandal. It’s not something that began with Harry and Meghan, and it won’t end with them. And, unlike most people, the royal couple have the ability to vanish onto huge estates for weeks on end, protected by police officers, with a large coterie of aides and advisors to fight PR and legal battles for them.

While both Harry and Meghan depend on the media to promote their causes, they seem to resent that two-way relationship. Indeed, Harry uses the gushing press coverage of the southern Africa trip against the media: “The positive coverage of the past week from these same publications exposes the double standards of this specific press pack that has vilified her almost daily for the past nine months; they have been able to create lie after lie at her expense simply because she has not been visible while on maternity leave.” As Peter Hunt, the former royal correspondent for the BBC, commented, “Harry has taken a sledgehammer to the symbiotic relationship once tolerated by the royals and the tabloids.”

As well, Harry and Schillings are claiming an intention to smear the couple, with the firm alleging the letter was “part of a campaign by this media group to publish false and deliberately derogatory stories about her, as well as her husband.” That’s a big step up from a simple copyright lawsuit.

Jim Waterson, the Guardian’s media editor, points out that Harry may be laying the groundwork to go after bigger media fish. “It is clear from Harry’s statement that the real target is less a print newspaper than the dozens of websites which rewrite its stories and amplify them around the world,” he writes. “Starting legal proceedings against the MoS regarding a single article is also a warning to its MailOnline, which publishes dozens of stories about Meghan every month.”

The royal legal team has to file buttressing documents within two weeks. Then it’s the turn of the Mail’s owners. This battle royal could get heated.