How you do you say Princess Eugenie's name? (Hint, it's not you-GEE-knee)

'Whatever,' the princess has said. 'I am now used to every pronunciation.' 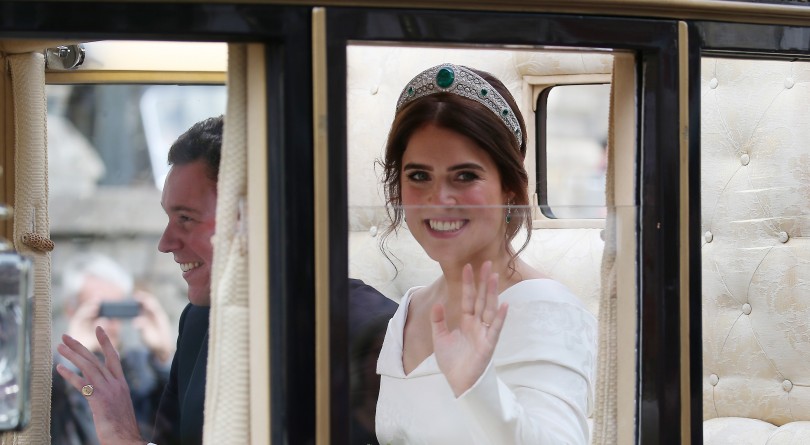 Princess Eugenie of York and Jack Brooksbank leave by carriage after their Wedding at at St. George's Chapel, Windsor Castle on October 12, 2018 in Windsor, England. (Neil Mockford/FilmMagic/Getty Images)

Princess Eugenie is used to people stumbling over her first name. “You-Janey?” “You-GEE-knee?” The 28-year-old bride has heard every variant under the sun. It’s not surprising. When she was born in 1990, her parents, Prince Andrew and the former Sarah Ferguson, bestowed her with a notoriously tricky name: Eugenie. She’s named after Victoria Eugenie of Battenberg, a granddaughter of Queen Victoria, who was born at Balmoral Castle in Scotland and who would marry King Alfonso XIII of Spain in 1906.

The answer to Eugenie’s conundrum? It’s “YOU-junnee.” In 2008, Eugenie revealed to the Telegraph that when she met people “who were struggling with it, my mum and I would help them by saying, It’s like ‘Use Your Knees.’ ” But she’s not fussed by those who still mess up her name: “Whatever, I am now used to every pronunciation,” she said

It’s not the only name to baffle non-royals. Palace staff explain to visitors that the Queen is addressed as “ma’am, as in jam” on second reference (the first is “Your Majesty”).

At least today’s Princess Eugenie is spared the wedding travails that afflicted her namesake. When Queen Eugenie and King Alfonso were riding in a carriage procession after their nuptials, an assassin threw a bomb into their carriage. Eugenie survived only because she looked away at the moment of explosion. Her dress was splattered with the blood of guards wounded in the attack.

Exiled during the dictatorship of Francisco Franco, she returned briefly to Spain in 1968 for the baptism of her great-grandson. Today, he sits on the nation’s restored throne as King Felipe.