Patricia Treble: That sound you hear is the heads of palace officials repeatedly hitting their desks. 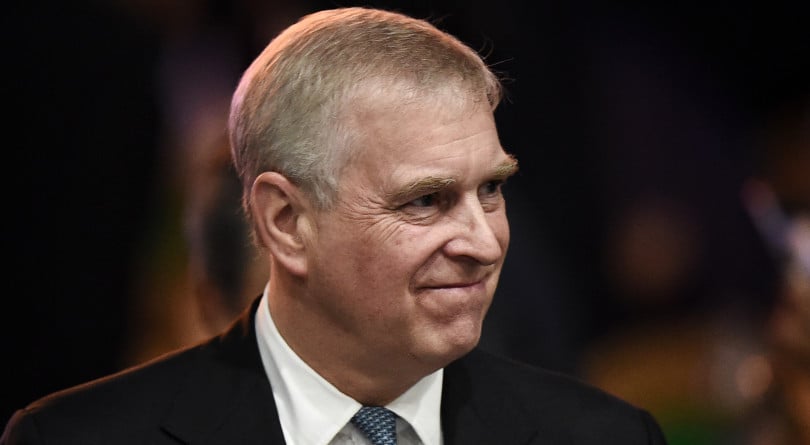 Britain's Prince Andrew, Duke of York leaves after speaking at the ASEAN Business and Investment Summit in Bangkok on Nov. 3, 2019, on the sidelines of the 35th Association of Southeast Asian Nations (ASEAN) Summit. (Lillian Suwanrumpha/AFP/Getty Images)

“Do you feel guilt, regret or shame?” journalist Emily Maitlis asked Prince Andrew in a blockbuster BBC interview that aired Saturday regarding his relationship with convicted pedophile Jeffrey Epstein. “It was the wrong decision to see Epstein in 2010 [after his conviction for soliciting prostitution],” Prince Andrew answered. “As far as my association with him is concerned, it had some serious beneficial aspects to areas we aren’t discussing today.”

No guilt about knowing a man who abused underage girls. No regret about staying in the luxury homes of a man who preyed on vulnerable teens after his depravity was legally adjudicated. No shame about having used his relationship with the well-connected Epstein to further his own career. No sympathy for the victims.

That question-and-answer volley at the end of a bruising hour of television is why the taint of the Jeffrey Epstein scandal won’t leave Prince Andrew. Maitlis’s Newsnight interview revealed a 59-year-old man seemingly devoid of empathy for Epstein’s victims and bewildered about how his gilded, privileged life has somehow ended up like this.

READ: The royal nightmare that is Prince Andrew’s friendship with Jeffrey Epstein

This scandal has plagued the Queen’s second son for more than a decade, so he had a bit of time to give more thought to his answers. It might have been an idea, for instance, not to mention how much he enjoyed Epstein’s “most extraordinary ability to bring extraordinary people together” at dinner parties where academics, politicians, business and cultural leaders would mingle. The conversations may have been scintillating, the food scrumptious, but it is tone-deaf to prattle on without noting, in the strongest possible terms, that those enjoyable moments were arranged by a convicted sex offender who used his A-list friendships as a bulwark against investigation into his sordid life.

The most incredulous moments came as Prince Andrew tried to rationalize visiting Epstein in New York in 2010. If, as Prince Andrew claimed, he “ceased contact with him once I was aware he was under investigation” in 2006 and wasn’t in touch with him until 2010, after Epstein’s conviction, then why did he not only visit Epstein in New York in December of 2010 but also stay at his mansion? “I question myself as to why I was there,” he says, explaining that he “went there for sole purpose of saying, ‘Because he was convicted, I can’t see you again.’ ”

Prince Andrew claims he didn’t want to end his friendship with Epstein over the phone because that “was the chicken’s way of doing it. I had to see him.” “I felt it was the honourable and right thing to do, and I admit fully that my judgement was probably coloured by my tendency to be too honourable.”

So, by his own account, a senior member of the royal family travelled to the United States to personally end a friendship with a convicted pedophile, which he also claims wasn’t particularly close. And knowing he was going to do so, he decides to stay in that same sex offender’s mansion, because “it was a convenient place to stay.”

That sound you hear is the heads of palace officials repeatedly hitting their desks.

He answered all of Maitlis’s questions, but a constant refrain of “no, no” and “I don’t recollect” didn’t help his cause. Did he remember Virginia Roberts, who has accused Prince Andrew of having sex with her while she was underage, including once in London at the home of Ghislaine Maxwell, Prince Andrew’s longtime friend and Epstein’s girlfriend? “It didn’t happen. I have no recollection of ever meeting this lady, none whatsoever.”

During the interview, which focused on whether he had sex here or there or with this person or that, Prince Andrew repeatedly said either “no” or he “doesn’t recall” or something similar, but never the categorical “No, I never had sex with her.”

For all the disbelief, there are a few moments when he did have what could be credible answers to Maitlis’s relentless questioning. In a legal deposition, Virginia Roberts said that on March 10, 2001, she went to the Tramps nightclub in London, danced with a sweaty Andrew who bought her drinks, then they went back to Ghislaine Maxwell’s house where she was told to have sex with the prince. She was 17 at the time. Andrew not only denies knowing her but says, “I don’t know where the bar is at Tramps. I don’t drink. I don’t think I’ve ever bought a drink at Tramps.”

And what is more, he says he couldn’t have been sweaty, as Roberts claims, as he didn’t sweat at the time, an aftereffect of his combat in the Falklands War in 1982. Who would make up that jaw-dropping defence but someone who knows it can be proven? (The condition is psychogenic anhydrosis.)

If that weren’t enough, the date stuck in Andrew’s mind because that afternoon he took his older daughter, Beatrice, to a pizza chain restaurant in the suburban town of Woking for a party. It was an “unusual experience” for the prince. Furthermore, his ex-wife, Sarah, was away, so he was home with their daughters.

Yet parts of that alibi collapse if Roberts is off with her timing. It’s easy to be off with a date, particularly remembering back several years, and it must be even more so for someone traumatized by sexual abuse at the hands of Epstein.

In the end, the damnation of Prince Andrew may rest on two images. One showing him with his arm around Roberts’s waist, with Maxwell in the background, which was apparently taken at her home in London in 2001. The other of Prince Andrew walking in Central Park with Epstein on that 2010 visit. While he says that New York photo shows him ending his relationship with Epstein, he has no logical answers for the other. While he raises questions about its authenticity—“You can’t prove one way or the other” and “It’s a photo of a photo of a photo”—he is sure he never met Roberts or stood for that photo: “I don’t remember that photo being taken.” Also, he says, he always wears a suit and tie when in London, not the casual clothes in the photo.

The program was riveting. Yet it will hardly quiet the speculation around Prince Andrew’s relationship with Epstein. He’s clearly girding for what is likely to come: a deposition in one of the myriad legal cases in the United States. So while he says that he’ll talk to American authorities, he’s careful to caveat those statements by saying he’ll obey legal advice on the issue.

Only now and again did he switch the focus from himself to others, including his family. “As it were, I kick myself for [it] on a daily basis because it was not something that was becoming of a member of the Royal Family and we try and uphold the highest standards and practices and I let the side down, simple as that.”

At the end of a gruelling interview, when Maitlis asks if there is anything else he wants to add, Prince Andrew replies, almost reflexively, “No…you’ve dragged out most of what is required. I’m grateful for the opportunity.”