It wasn't without its drama—including separate exits for sparring family, an awol Camilla and a rogue Great Gatsby reading—but in the end, Eugenie and Jack married amid friends and family 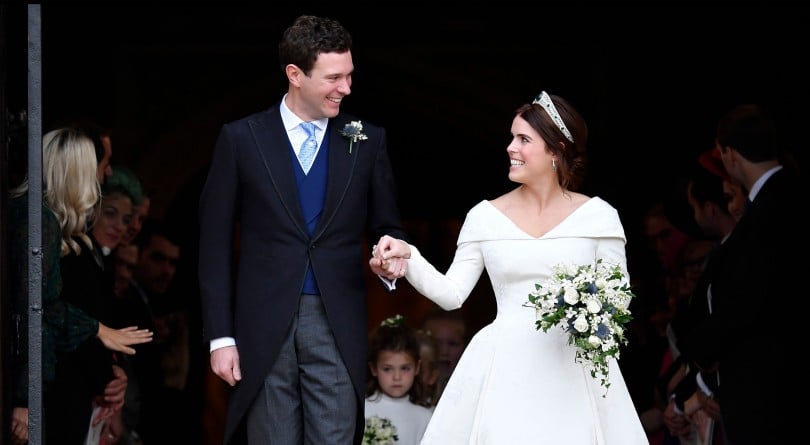 Britain's Princess Eugenie of York (R) and her husband Jack Brooksbank emerge from the West Door of St George's Chapel, Windsor Castle, in Windsor, on October 12, 2018 after their wedding ceremony. (Toby Melville/AFP/Getty Images)

Princess Eugenie’s wedding to Jack Brooksbank at St. George’s Chapel in Windsor Castle was always going to be runner-up royal wedding of 2018. Nothing could top the nuptials of her cousin, Prince Harry to Meghan Markle in May that caused more than 100,000 people to crowd into Windsor while another three billion people watched from around the world.

In the end it was a family wedding, with the usual hiccups, tempests and surprise appearances. It was also the union of two people in love. “Oh…my heart…Oh, break my heart,” whispered Jack when Eugenie joined him at the altar, according to a lip reader.

It was not without its trials. A sharp, cold wind whipped so fiercely inside the thick ramparts of Windsor Castle that guests clutched their hats and their hems as they made their way into the medieval chapel. Some of the autumnal flowers and foliage decorating the entrance to St. George’s Chapel were sent airborne, nearly missing officials standing in place.

At exactly at 11 a.m., the bride emerged from a cream Rolls-Royce Phantom 6 with her father, Prince Andrew, Duke of York. The 28-year-old princess struggled up the chapel’s stairs, encumbered by her full-skirted wedding dress that was buffeted by the wind. Waiting for her were 850 guests, including around 30 members of her extended family plus quite a few celebrities, including a bored looking Kate Moss as well as Demi Moore, Liv Tyler and Ricky Martin. 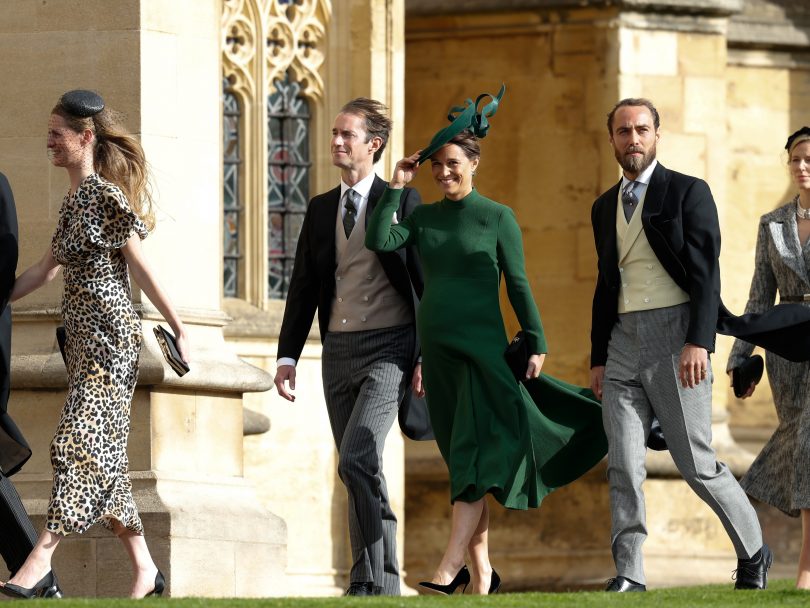 Her dress was exquisite, perfect for her figure and the spectacular venue. Designed by Peter Pilotto, the long-sleeved gown featured a soft, wide neckline and a wide train that flowed from a large bow—homage to a similar one on the wedding gown of her mother, Sarah Ferguson. The gown’s low back was specifically requested by Eugenie, to showcase the scars from surgery she had at age 12 to insert titanium rods and screws to correct her scoliosis. Shamrocks, thistles, York Roses and ivy were woven into the jacquard fabric.

Luckily, she’d forgone wearing a veil, allowing everyone to gaze at her spectacular tiara. It hadn’t been seen in public for around a century. The diamond and emerald confection, designed by Boucheron in 1919, was bequested to her great-grandmother, Queen Elizabeth the Queen Mother, in 1942 by Mr. Ronald Greville along with most of her huge jewellery collection. It’s been hidden away ever since, and only now lent to Eugenie by the Queen.

Nothing had been left to chance. The wedding’s seating logistics were deftly handled by royal officials experienced in how to avoid public confrontation. The bride’s controversial mother, Sarah, Duchess of York (aka Fergie), was seated in the front row on the bride’s side, next to her ex-husband, Prince Andrew — with whom she lives (their lives are, well, complicated). Her location put her conveniently out of the direct line of sight for her former father-in-law, Prince Philip, who has made no secret of his distaste of Fergie’s years of scandals and tawdry headlines. There had been concerns Philip, 97, wouldn’t attend the wedding, but in the end, his grandfatherly duty to Eugenie outweighed any other discomfort. Still, it was the first time Sarah been seen together with Prince Philip since she and Andrew separated in 1992. And Sarah couldn’t hide her irrepressibly boisterous side, running to shake hands with well-wishers when she arrived at St. George’s with her older daughter, Princess Beatrice, then frantically clutching her green-and-gold hat as it tipped dangerously in the wind. 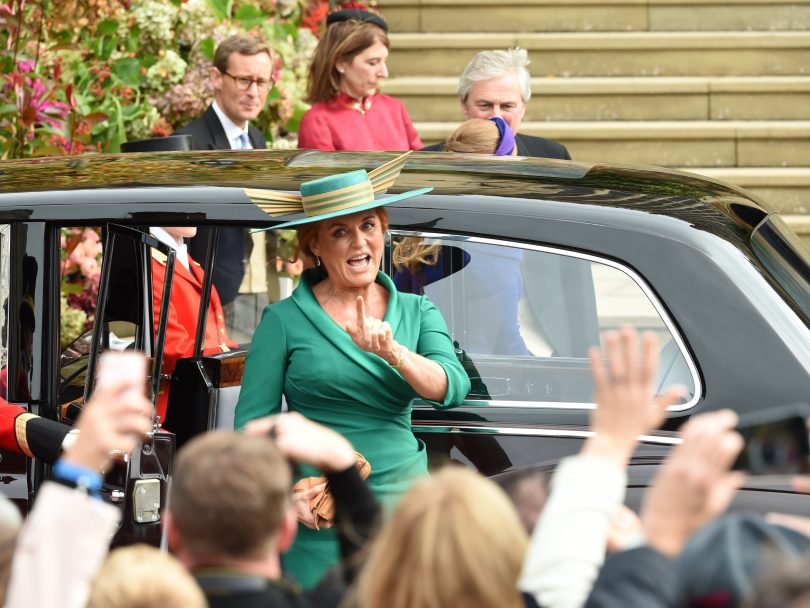 Sarah, Duchess of York arrives for the wedding of Princess Eugenie to Jack Brooksbank at St George’s Chapel in Windsor Castle on Oct. 12, 2018, in Windsor, England. (Jeremy Selwyn/Getty Images)

That wasn’t the only source of family tension. There were a few notable absences. Though Prince Charles flew from Scotland for the nuptials, his wife, Camilla, opted to stay behind, instead visiting two schools and enjoying a cooking class. She’s reportedly not keen on Prince Andrew and since it was “not a three-line whip” of a royal wedding, as royal watcher Camilla Tominey explained diplomatically on ITV, she could avoid it by continuing with long-booked duties elsewhere. As well, Princess Alexandra of Kent, the Queen’s cousin, backed out after breaking her arm. Still, there were enough royals in attendance to satisfy the photographers, including the fab four of William, Kate, Harry and Meghan.

The service itself was not without its odd moments, including a dramatic reading by Princess Beatrice from The Great Gatsby. “I get the impression that the princesses may not actually have read The Great Gatsby, seeing as they just read a passage about the smile of a conman about to massively defraud you,” quipped journalist Ned Donovan on Twitter.

In the lead-up to the wedding, Eugenie’s father, Prince Andrew, had pressed for a grand event befitting a princess. “Sharp ambitions,” is how the BBC royal reporter describes his machinations. Yet, try as he did, there just wasn’t enough interest to sustain the avalanche of press releases and “scoops” ahead of the nuptials. Eugenie may be a princess (her full title is Her Royal Highness Princess Eugenie of York) but she isn’t in the direct line of succession—she fell to ninth spot after the birth of Prince Louis in April—and doesn’t perform public duties as a full-time royal, like her cousins Harry and William. So instead of every network carrying the service live, as they did that of Harry and Meghan, it was folded into the morning show on just the private ITV channel. ITV was granted exclusive interviews with the York family (including Andrew stating with a straight face that it was “not a public wedding, meant to be a family wedding”) that were interspersed with copious commercials. The tenor Andrea Bocelli sang two songs, including Ave Maria, then had his new album helpfully promoted on ITV after the wedding service.

If anything could go wrong, it would involve the seven young bridesmaids and page boys, ages 3 to 7, that included royal cousins known for enjoying roughhousing together (in the summer, Savannah Phillips, 7, granddaughter of Princess Anne, pushed Prince George, 5, down a hill on the sidelines of a polo match). Alas, aside from the usual enthusiastic waves, a few skips and funny faces, they were on their best behaviour, aided by a coterie of parents and nannies and experienced child wedding wrangler, Lady Louise Mountbatten-Windsor, 14, daughter of Prince Edward and his wife, Sophie.

Even the end of the wedding was carefully choreographed. While Andrew, Sarah and Beatrice went to the front steps to wave off Jack and Eugenie, the rest of the royal family, including Philip, walked to the chapel’s side door to wave to the newlyweds as they rode by in the Scottish State Coach on their short route through the streets of Windsor. That part of the wedding caused a lot of public criticism as the security and other public costs, estimated at more than $2 million, didn’t seem to be justified by the sparse crowds.

For all for palace intrigues, all that mattered for the bride and groom is that they are married amid friends and family. And in the end, that’s a fairy tale every one can support.