Royal baby steps: an FAQ about what’s next for Archie

Will Harry and Meghan take parental leave? Why doesn't Archie have a title? And what's with his last name? 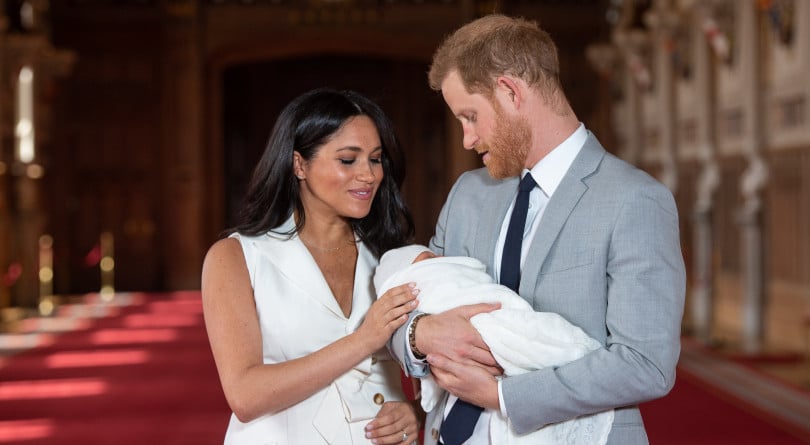 Prince Harry, Duke of Sussex and Meghan, Duchess of Sussex, pose with their newborn son Archie Harrison Mountbatten-Windsor during a photocall in St George's Hall at Windsor Castle on May 8, 2019 in Windsor, England. (Dominic Lipinski/WPA Pool/Getty Images)

Babies are cute. And everyone likes fussing over them. Just look at what happened when Archie Harrison Mountbatten-Windsor was born on May 6: pages and pages of newsprint were devoted to capturing every moment of his arrival. Now, after a flurry of attention from around the world, which he appears to have slept through, Archie is ensconced in his family’s new home, Frogmore Cottage, in a secluded spot on the estate that surrounds Windsor Castle. His mum, Meghan, Duchess of Sussex, is on maternity leave and will have help from her mother, Doria Ragland, when his dad, Prince Harry, undertakes the occasional public engagement.

Since the questions keep coming regarding the newest member of the House of Windsor, here is the FAQ you didn’t know you needed:

He may be seventh in line to the throne, and Queen Elizabeth II’s eighth great-grandchild, but he’s also a 7 lb 3 oz newborn. He sleeps, eats and poops…you get the idea.

When is his christening?

He’ll likely be baptized before the Queen moves to Scotland in late July for the start of her summer vacation at Balmoral. It could be at any royal locale, though likely Windsor Castle. After all, his parents live really close by and were married at the world’s oldest inhabited castle a year ago.

We also know what Archie will be wearing—the family’s ornate christening gown. It’s an exact replica of the Spitalfields silk and Honiton lace gown commissioned by Queen Victoria for her eldest child’s baptism in 1841. All royal children were christened in the original until it became so fragile that Queen Elizabeth II had her personal dresser and stylist, Angela Kelly, make an exact copy in 2004.

Harry and Meghan would be advised not to delay. When six-month-old Princess Eugenie was christened in 1990, she was so big they wrapped her with a shawl to hide that the back of the dress was open.

What other baby milestones will be marked?

In the era of Instagram and smartphones, royal parents try to keep their children out of the public eye as much as possible. William and Kate famously abandoned the once common photo op with a small selection of media (who would “pool” or share their images with everyone) in favour of a few carefully curated images released on birthdays and other auspicious anniversaries.

So don’t expect Archie to appear with his family on the balcony of Buckingham Palace after Trooping the Colour in June. He’s just too young. Most royal children take part after they’re at least a year old, though that’s not always a given. In 1964, the Queen shocked everyone when she showed off her fourth child, Prince Edward, born three months earlier.

Otherwise, it’s unlikely the public will get a peek at the littlest Windsor for months and months. We may get photos for Meghan’s birthday on Aug. 4 or Harry’s on Sept. 15. Or perhaps we will see him on video for the Queen’s Christmas Message.

Britain’s young royals tend to be hands-on parents, but they also have lots of staff, including nannies. So their paternity break will likely be around six months, though they won’t be dropping off the face of the Earth. While ordinary folk either work or are on paternity leave, those labour rules don’t apply to royals. They aren’t Monarchy Inc. employees.

Prince Harry already sharply reduced his workload ahead of the birth of Archie, and that light schedule is expected to continue. So Harry can undertake the occasional public duty—such as the launch of Invictus Games 2020 on May 9 and next week’s announced engagements—and still have lots and lots of time to be a new dad. That also applies to Meghan. There may be a charitable function she really wants to attend, or perhaps Trooping the Colour, but that doesn’t mean her maternity leave is over. It’s just different from those of ordinary mums.

There are rumours that Harry and Meghan want to go on a big tour, or perhaps live abroad for a while. Will Archie go with them?

Harry and Meghan should resume many of their duties in the fall. There are rumours of another big tour, like the two-week visit to Australasia, where they revealed Meghan was expecting.

In that case, expect them to bring Archie. It’s now usual for royals with young children to base themselves somewhere while on a longer tour so they can go back to their children at the end of the day. In 2016, William and Kate used Government House in Victoria as Cambridge headquarters. So while they were touring British Columbia and Yukon, their children, George and Charlotte, were having fun on the West Coast with their nanny.

As for living abroad, that’s been described as in the very rough planning stage. But yeah, Archie would definitely go with them.

Also mark May 9, 2020 on your calendar. That’s when the Dutch version of the Invictus Games begins. Expect the entire Sussex family to be there.

Is it just me or was that photo of Archie and his parents surrounded by the Queen, Prince Philip and Doria Ragland unique?

You aren’t alone. It was an extraordinary photo, more than just relatives lovingly looking at a sleeping baby. In a world so often divided on social, economic and racial lines, to see a multi-racial, multinational family sends a powerful signal of inclusion, acceptance, tolerance and love. Especially love.

No one is naive enough to assume one photo or one biracial person marrying the Queen’s grandson can cure the ills of the world. Since her engagement, Meghan has been subjected to an extraordinary amount of racist attacks and online hatred.

Yet at the same time, royalty is meant to unify and inspire. And in that regard, that photo—which was everywhere—did just that.

I’m still confused about Archie’s lack of title. Why doesn’t he have a royal title like his cousins, George, Charlotte and Louis?

Titles are a bit of a minefield, though there are rules as to when royal styles and titles are used. As the Queen hadn’t changed those rules by the time of his birth, Archie just didn’t qualify to be “His Royal Highness Prince Archie.”

Most expected Archie to be given his dad’s secondary title of Earl of Dumbarton (so Archie, Earl of Dumbarton). But his parents decided—at least for now—that he won’t have any title. So he’ll be simply Archie Harrison Mountbatten-Windsor. (Formal greetings will be a very Downton Abbey-esque “Master Archie.”)

But that decision may not be the end of the Archie title matter. When his grandfather, Charles, eventually becomes king, then, as a grandchild through a male line of a monarch, Archie is entitled to “HRH Prince.” Yet, again, his parents may decide against it.

Was the name Archie on any royal expert’s radar?

Umm, no. Archie (not even Archibald, but just Archie), though now a popular boy’s name in England, was well down everyone’s possible name list, and was never a favourite. (Meanwhile, Harrison comes from the surname meaning “son of Harry” and that “son of” styling is gaining ground as a moniker for boys in Britain.)

As for me, I’ve been very honest in my royal baby naming failings.

My royal baby naming streak is UNBROKEN, thanks to Meghan and Harry picking "Archie Harrison."

Why is his last name Mountbatten-Windsor and why don’t other royals use it?

The names are a merger of those of Archie’s great-grandparents. Mountbatten is the name of Prince Philip’s family, and Windsor is the traditional last name of the House of Windsor.

On Feb. 8, 1960, the Queen issued the following declaration: “Now therefore I declare My Will and Pleasure that, while I and My Children shall continue to be styled and known as the House and Family of Windsor, My descendants other than descendants enjoying the style, title or attribute of Royal Highness and the titular dignity of Prince or Princess and female descendants who marry and their descendants shall bear the name of Mountbatten-Windsor.”

That meant the last name Mountbatten-Windsor was for children of a male line of the Queen’s growing family who didn’t already have a royal title. (The rest of the extended royal family continued to use Windsor as a last name.)

After that, it was simply a matter of time before the name would be used.

While her daughter, Princess Anne, used that surname on the marriage certificate for her first wedding in 1973, it took another three decades for it to be used full-time. That’s when Prince Edward and his wife, Sophie, Countess of Wessex, decided not to use royal titles for their children: Louise Mountbatten-Windsor, born in 2003, and James Mountbatten-Windsor, born in 2007. (They are known as Lady Louise and James, Viscount Severn, because why would royals make life easy for anyone.)

Now, with Archie, there are three royals with a last name of Mountbatten-Windsor. OK?