The magic of the Invictus Games: 'How you'd like society to be'

Canada's Lt.-Col. Rhonda Crew, 48, may not have won her cycling race. But she registered a personal best — and experienced the healing nature of the games. 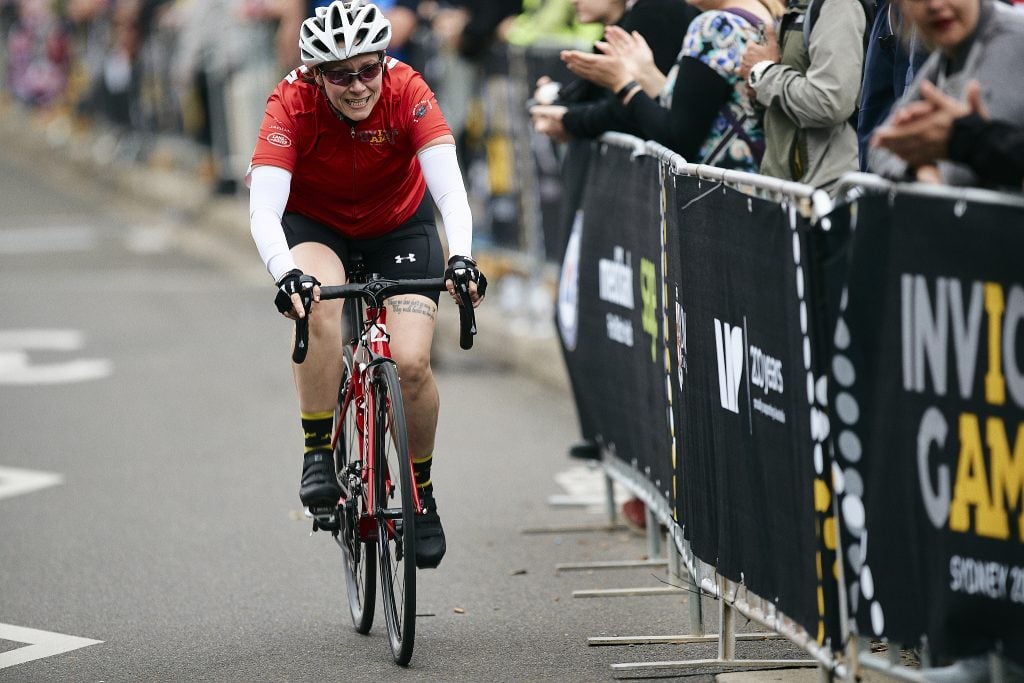 Rhonda Crew competing in cycling on Sunday, October 21, 2018 at the Invictus Games in Sydney, Australia.

“It’s the fastest I’ve ever gone,” says Lt.-Col. Rhonda Crew, after competing in the Invictus Games in Sydney, Australia. On Sunday, she participated in two cycling events, setting personal bests in each race. It wasn’t easy. “At the very end of each loop is a horrible hill. I was on my lowest gear, standing straight up, going so slow I thought I’d fall over,” she recounts, her voice tiring as the adrenaline that pushed her all day slowly fades away. “That hill was brutal, but I never stopped, I never walked, I never puked.”

“I went in wanting a personal best, knowing it would not be a medal,” Crew explains. “I’m 48 and there are 20-year-olds [competing] against me.” For the most senior nurse in the Canadian Armed Forces—currently on a team charged with building the military of the future—the Invictus Games have been transformative. “We all have something in common—military service and injury or illness,” she says. “It makes us kindred spirits.”

Her experiences are why Prince Harry created the multinational competition for ill, injured and wounded servicemen and women in 2014, after seeing “the power that sport could play in the recovery of both mind and body,” he said at the launch of Toronto’s Invictus Games, held in 2017. “I thought that surely everyone, whether connected to the armed forces or not, would be inspired by their achievements.” The Sydney Games, which end on Oct. 27, involve more than 500 competitors from 18 nations competing in 11 medal sports, as well as two display events.

For Crew, the competition also marks a very personal turning point. A few years ago she was diagnosed with PTSD after a career, much of it as a flight nurse, which involved tours in Bosnia and Afghanistan. After she was selected for the Canadian team, she began talking publicly about mental health, and how she’s dealt with those issues.

Crew first joined the reserves as a 17-year-old, becoming one of the first women in an infantry regiment, the Stormont, Dundas and Glengarry Highlanders of Cornwall, Ont. Then, after going to nursing school and working in the civilian world for a few years, she rejoined the military in 1997. Almost immediately, she was serving in the stressful job of a flight nurse on helicopters and fixed-wing aircraft. The peripatetic nature of military life—Comox, B.C., Bosnia, back to Comox, Halifax, Winnipeg—finally took her to Goose Bay, Labrador, where she met her future husband, a search and rescue technician named Sgt. Duane Bryson.

They lived in their new home in Trenton, Ont. for two days before she boarded a plane for Afghanistan. There she worked in the hospital on the Kandahar base as well as in American Black Hawk medical evacuation helicopters, while she and her husband used Skype to settle on paint colours and place furniture in their house. In early 2008, a respiratory ailment forced her own medical evacuation home, where she arrived to four feet of snow in the driveway and the front door key buried under a rock, somewhere. She and Duane now live in suburban Ottawa.

It was in Ottawa that she first thought about competing in the Invictus Games. She’d witnessed the effect it had on competitors first-hand: her husband participated in the Orlando Games in 2016. Seven years before, he had what his wife describes as a “catastrophic injury.” The search-and-rescue technician nearly drowned during a training exercise and suffered brain damage after being deprived of oxygen. Once an elite athlete, he “was so isolated” by his injuries and how people would react when they saw him having difficulty walking or slurring his speech, she recalls: “He was deteriorating, losing a lot of his own identity.” They signed Duane up for training and he was selected for the Canadian team going to Florida. Duane was on the sitting volleyball team as well as being a sprinter — his awkward gait would instantly straighten when he ran. She never saw him smile as much as he did during that competition: “Everyone with challenges were celebrated,” she recalls.

Though Rhonda Crew knew the benefits of the Invictus Games in not just boosting spirits but also showing the camaraderie that exists around the world, others didn’t. When a colleague recounted that she’d heard from others that the games were a waste of time and money, Rhonda went home to talk to her husband. “What can I do?” she recounts. “I can admit I have mental health issues, and sign up [for Invictus Games training].” So, for the first time, she talked to her superior officer in her chain of command about her own mental health issues, including her PTSD diagnosis. She’s lucky, she acknowledges: while others can receive a negative reaction from superiors when they reveal mental troubles, her experience was entirely positive and her career has flourished.

Her first injury occurred in 1999, she explains in that manner-of-fact way so common with nurses, when she was a lieutenant in Bosnia, “I was sexually assaulted by a soldier from anther [non-NATO] nation,” she recalls. She immediately reported the crime to the Canadian provost marshal (military police). She picked her attacker out of a photo line-up as well as a physical one. While the NATO investigators believed her, the soldier’s own commanders didn’t. Then, she was asked what she recalls was the most important question: “What did I want?” She wanted him gone. That same day, he was removed from the base. Though he was never punished in his own country, she was told his record would include a warning that he never work with NATO forces again. In the next few days, nearly 10 women—cleaners, lower ranks in the multinational force—told her that he’d raped them, but they were scared to come forward. Crew sought out help dealing with the effects of the sexual assault, and remained in theatre.

Her second injury was experienced over years of being a trauma nurse, in particular during her stint in Afghanistan. “We had three mass casualty situations in the first week,” she recalls. “There was trauma all the time.” During one evacuation, her helicopter was hit by enemy fire and landed near a minefield. While their armed helicopter escort took the wounded soldier to base, they were stranded until a quick reaction force arrived. Having trouble coping, she sought out help from a psychiatrist on base.

The third injury happened in Canada. The trauma she and other nurses experienced in Afghanistan didn’t stop when she returned. She was based at CFB Trenton, Ont., with Duane. “There was trauma all the time,” she says, including medical evacuation flights from Afghanistan and emotional ramp ceremonies, when fallen soldiers were returned to Canada. Finally, she went to a superior: “We’re nurses. I’m not saying it’s worse than anyone else, but when we go overseas, we do trauma; we go home and do more trauma, and attend ramp ceremonies. It’s too much for my staff.” They got permission to take a less official presence at the ramp ceremonies.

By then, her psychiatrist thought she might have PTSD. She did. “I pushed it and pushed it and pushed it, and at some point it starts leaking out the edges,” she recounts. The illness was compounded by personal suffering: in the space of a year, she lost her parents, father-in-law and brother-in-law, all while her husband’s health has deteriorated. Training for and competing in the Invictus Games has been crucial to her well-being.

Woefully unprepared for the training regimen—“I’m not a competitive person”—she still embraced the physical and emotional challenge. Not only did she lose 30 lb. and return to her old level of fitness while getting ready for her races, but she’s got a new appreciation for sports and the games. While another competitor is inspecting an athlete’s prosthetic, she’s checking out wheelchairs for Duane; they are all sharing addresses and email information. “It’s fantastic,” she says of the camaraderie. “We want to come back to being better than we were,” Crew says. “We are all able to help each other. There’s something sweet about that, that’s how you’d like society to be.”