The Markles aren't a mess, they’re a mirror

Scott Gilmore: Any family put on the royal pedestal would be found wanting. The truth is, the Markles are actually very average—they are us. 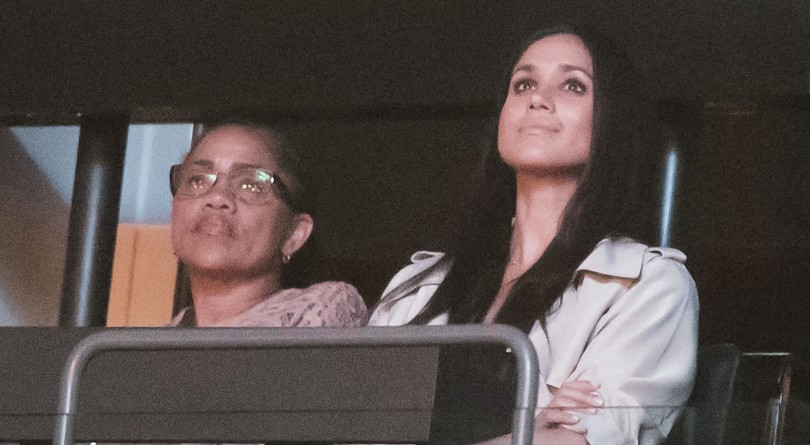 Meghan Markle is pictured with her mother Doria Ragland during the Invictus Games Closing Ceremony at the Air Canada Centre in Toronto. (Photo by Danny Lawson/PA Images via Getty Images)

The ritual sacrifice has begun. The offering is being marched through the public square to the palace, where she will be raised up, then cast down. This is what we do. From Babylon to Buckingham, the instinct has not changed. We used to throw virgins into volcanoes, now we throw them to the press.

I have not been following the royal wedding with the fastidiousness of some, or most. The details of the dress, or the anachronistic protocols don’t interest me much. I would not mock those who are spellbound, however. We all have our strange fixations—we are mesmerized by subjects or hobbies that most find mind-numbing. For example, in this case, the actual details of the upcoming marriage between Prince Harry and Meghan Markle do not interest me, but I find our public response to the event fascinating.

Markle and her family are being immolated by the paparazzi, the tabloids and the mainstream media. But, let’s be clear, we are the ones who are lighting the fire. The photographers and columnists (including this one) are only paying attention because you want us too. We’ve tied them to the stake and piled up the firewood so you can light the match and applaud.

Celebrity culture is by its nature sacrificial. We raise up these idols solely so we can knock them down. If we don’t put the starlet on the cover of People magazine, we can’t shame her for putting on baby weight two years later.

This phenomenon is most obvious with the British royal family. We run through the cycle of worshipful respect followed by open scorn faster than the Queen downs her 11 am gin and Dubonnet. None of them escape the sacrificial altar. The fawning photo essays are merely preludes to the scandalous revelations of toe-sucking and Nazi dress-up.

So, we all knew that Markle would be burnt, and for good measure her family, too. I have seen breathless reports that her father is obese; that both she and her parents are divorced; that she is mixed race; that her extended family is feuding; and that her father had a side hustle selling photos to the press. But, I am sure this is an incomplete list of the revelations that have been paraded through the pages of this magazine and almost every other print publication in the English speaking world.

The tone of these stories range from the more benign “it’s a shame this has come to light” to the angrily malignant “who does this horrible woman think she is”. Occasionally the more self-important publications will pretend they are only reporting on the fact that other less scrupulous members of the media are making a big deal about this. (Yes, I realize this column falls into that category, ironically.)

What I find interesting is that the sins for which she and her family are being tsked and mocked are so universal. Consider the reports about her divorce. In the United States almost half of all weddings involve at least one partner who was previously married. In the United Kingdom, the odds that your marriage will end in divorce have been steadily increasing. As of 2016, for every two knots that are tied, roughly one is undone. Obesity? In England, 62 per cent of adults are now classified as overweight. On this side of the Atlantic, the numbers are almost the same. Mixed race? In England, one in 10 couples have different ethnicities—a 35 per cent increase since 2001. In the United States, the number of children with parents from two different races is growing at a rate three times faster than the population in general, which makes sense when you consider that the majority of American newborns will not be white by 2020.

The truth is the Markles are actually very average. If any family, including yours, was being stalked and scrutinized by the media (especially the British media), there would be dozens of so-called revelations. And, if any other family was being placed on the royal pedestal, as the Markles are, they would also be found wanting.

This may be the collective reason we do this to the royals, and the pop stars, and the sports heroes. They are our avatars. They are us. And we hate them for their weaknesses and blemishes because we hate ourselves for the same things. We need to lighten up. So, pour yourself a gin and tonic, toast the young couple—they’ll need all the luck they can get—and skip the next story sacrificing the Markles or anyone else on the altar of shame.