The Meghan Markle pendulum swings to the negative

After much rosy coverage of the Duchess of Sussex, it was inevitable the media would get tough on her 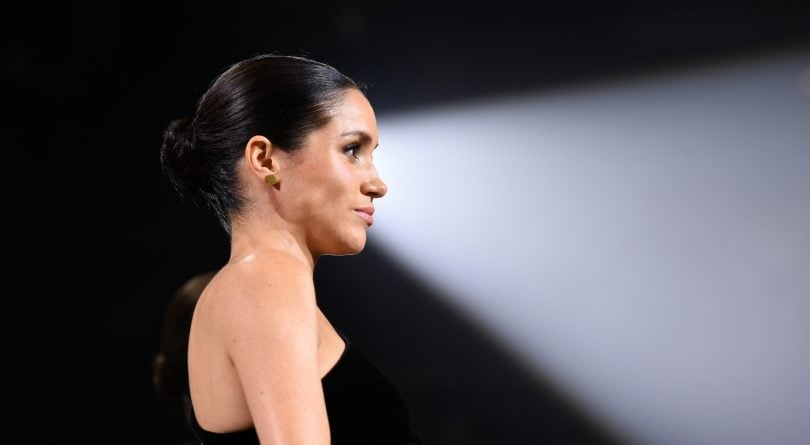 Meghan, Duchess of Sussex on stage during The Fashion Awards 2018 In Partnership With Swarovski at Royal Albert Hall on December 10, 2018 in London, England. (Photo by Joe Maher/BFC/Getty Images)

In recent weeks, the fairy tale of Meghan and Harry has been battered by some decidedly negative headlines. “ ‘Demanding’ Meghan Markle ‘emails staff instructions as early as 5 a.m.,’ it’s claimed as personal assistant quits in tears,” blared the Sun, as it reported that the duchess’s assistant was leaving Kensington Palace after just six months on the job. Then stories of a feud between Kate and Meghan (or at the least distance between the sisters-in-law) went viral after reports that Kate had apparently criticized how Meghan was treating palace staff, and that Kate had “left in tears” after a bridesmaid fitting for daughter Charlotte in advance of last May’s wedding.

Prince Harry wasn’t spared in the Meghan-focused onslaught. He apparently didn’t take kindly to his older brother cautioning him to slow down his breakneck romance with the Toronto-based actress. There were reports that Prince Harry petulantly yelled, “What Meghan wants, she gets” in the lead-up to their wedding, and that even the Queen got dragged into a “heated exchange” over which of her tiaras Meghan wanted to wear to her nuptials. Even the imminent departure of the couple’s private secretary was seen as adding to the “duchess difficult” storyline, even though Samantha Cohen had only agreed to temporarily add on to her 17 years of royal service, filling in when Harry’s private secretary left earlier in 2018.

The revelations, many by royal correspondents with pedigrees of breaking stories that are later proved to be true, piled on top of each other in a messy heap, spread farther and wider by competitors cribbing the newest information into their own articles.

READ MORE: Six reasons why Meghan Markle is just like us

But the string of bad news wasn’t unexpected. No honeymoon lasts forever—such is the case with newlyweds, politicians and new hires the world over. Royalty has no special immunity from the phenomenon. Months of rosy coverage devoted to Meghan, Duchess of Sussex, was bound to end at some point as reporters got a breather from the overwhelmingly positive stories of weddings and tours and were able to look more closely into how she was settling into her new life.

A year ago, when her engagement to Prince Harry was announced, Meghan Markle was a “breath of fresh air for the royal family. The former actress plunged into royal duties with a seemingly natural enthusiasm that enchanted the huge crowds that turned out to see the couple in the months before their nuptials. When a 10-year-old student told Meghan she wanted to be an actress, Meghan wrapped the girl in a big hug, telling her she “would like to see me on TV when I become an actress.”

Inevitably some storylines were hilariously over-the-top in their accolades, including when Meghan did something that millions do every day while at her first solo engagement—close a car door. With “Meghan Markle closed a car door by herself & the Internet is flipping out,” Bustle seemed to speak for a bemused world.

Sympathy was with Meghan, even during the Thomas Markle fiasco, when her father was revealed to have set up and profited from photo shoots, then suddenly backed out of walking her down the aisle after claiming a health emergency. That continued as he, and her half-sister, Samantha, repeatedly talked to the media (for a price) about their famous relation.

RELATED: Will Harry and Meghan’s baby get a royal title?

The honeymoon continued for months, until the end of the couple’s hugely successful 16-day tour of Australia, Fiji, Tonga and New Zealand in October. Then, as the seasons changed, and the pregnant duchess and her husband largely disappeared from public view, an end came to overwhelmingly positive Meghan media coverage. It was as inevitable as the post-wedding realities of married life, when fights and disappointments temper and test the gauzy dreams of a new life together. Except, for Meghan and Harry, that hard transition into their new roles has happened with the world watching. And for every fan who craves only gushingly positive stories, there are plenty who take some comfort in knowing that even the glamorous Sussexes have troubles, albeit of a decidedly royal nature.

It’s happened before. Around six months after Prince William and Kate Middleton married in April 2011, the same pendulum swing from soft to harder stories followed. That autumn, “The disappearing duchess” so vanished from public view that the palace had to announce she was working privately “to know a number of charitable causes and institutions related to national life better, so she can make well-informed decisions about her future role.”

Nothing was off-limits. Designer Vivienne Westwood attacked Kate’s harsh eyeliner. Mary Portas dismissed her fashion sense and trendsetter status. Kate was criticized for her perceived laziness. “I’m beginning to see her job as being there to smell nice and have lovely hair,” wrote Tanya Gold in the Guardian. For good measure, she also went after William for his self-pity regarding his future role as monarch.

Fans jumped to Kate’s aid, just as they are rallying around Meghan today. “To all those Kate Middleton critics out there, all I have to say is, don’t mess with the Duchess of Cambridge,” said an American in a passionate defence of the royal duchess. “She’s cool, she’s hot, she’s everything you’re not.”

As with Kate seven years ago, Meghan’s current spate of bad publicity will end, and an equilibrium will be reached. At least for a time. The pendulum will inevitably start swinging again, pushed into motion by the birth of their baby in the spring or the cost of renovations on their house on the Queen’s Windsor estate. It’s only a matter of time.