The royal nightmare that is Prince Andrew's friendship with Jeffrey Epstein

Buckingham Palace denies any criminal link between the Prince and Epstein, but the pictures have already done him damage 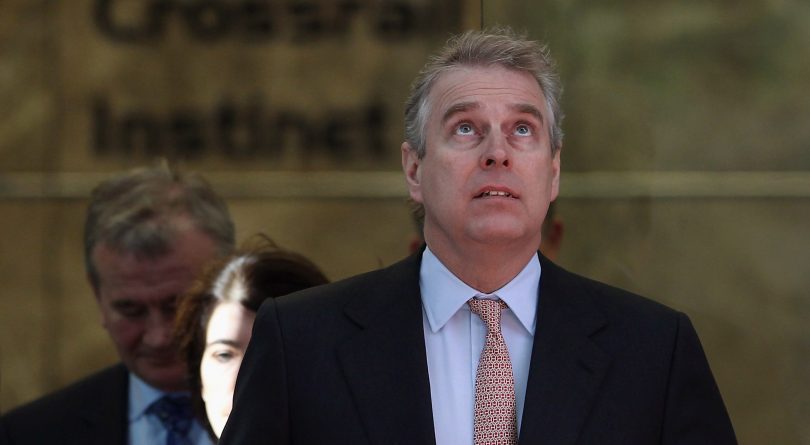 Prince Andrew, Duke of York leaves the headquarters of Crossrail at Canary Wharf on March 7, 2011 in London, England. (Dan Kitwood/Getty)

This article was updated on Aug. 24, 2019 to include a new statement from Prince Andrew.

Throughout his adult life, Prince Andrew has surely known that the sword of Damocles was suspended over his head by that famous single horsehair. He enjoys the grand lifestyle and power inherent with being a son of Queen Elizabeth II, yet must be aware of the precariousness of his position. And now that thread is seriously fraying.

It’s all because of his own actions.

The Duke of York, 59, chose to remain a close friend with Jeffrey Epstein, the wealthy convicted pedophile who hanged himself in U.S. federal custody earlier this month while facing sex trafficking charges. Not only was Andrew his friend, but the prince stayed close to the financier after Epstein’s 2008 guilty plea, incarceration and registration as a sex offender, close enough that they were photographed together walking in New York two years later.

Andrew has always had a reputation for being headstrong, arrogant and tone-deaf to criticism. He’s also immensely loyal. Indeed, he has helped bail out his ex-wife, Sarah, Duchess of York, from her mountains of debt time after time, and even today, she lives with him in his home, Royal Lodge, near Windsor Castle. Those characteristics can be seen in his relationship with Jeffrey Epstein. Why Andrew didn’t sever ties with Epstein after his sex crimes conviction is a mystery that he has never answered, though he has denied “any suggestion of impropriety with underage minors,” according to palace statements.

MORE: It keeps getting worse: an update on the Prince Andrew sex scandal

Now, though Epstein is dead, the threat to Andrew is possibly greater than ever. “Our investigation of the conduct charged in the indictment—which included a conspiracy count—remains ongoing,” stated Geoffrey Berman, the lead federal prosecutor in Manhattan. His office, known for its aggressive, no-holds-barred investigations, is systematically going through every part of Epstein’s life, as well as the lives of those around him, including the staff who allegedly facilitated his sexual deviancy over the decades. They could trade their knowledge of the criminal actions of more important, possibly more famous people in return for lighter sentences.

For Andrew, this is a scandal without end. In 2011, his close ties to Epstein exploded on the front pages of the British press when those aforementioned photographs, taken the previous year in Central Park, were published, along with allegations from Virginia Giuffre, who claims that she was paid by Epstein to have sex with the prince when she was just 17.

Buttressing those explosive allegations was a photo showing Andrew standing next to Giuffre with his arm around her waist, while in the background stands Ghislaine Maxwell, a British socialite (her father is the late media baron, MP and fraudster Robert Maxwell) and Epstein’s companion. Many of the females who say they were abused as teenagers point the finger at Maxwell, saying she procured them to offer massages as well as sex for Epstein and his coterie of powerful friends and acquaintances.

The scandal gained fuel when it was revealed that Andrew’s ex-wife had accepted £15,000 from Epstein to help pay off her debts. A few months later came accusations that Andrew was too cozy with politicians in corrupt regimes, especially given that he was a trade envoy for Britain. In particular, he sold his marital home near Windsor Castle for well over asking price to the son-in-law of Kazakhstan’s dictator. Andrew was forced to resign his government position.

Slowly, however, the story died away, only to be revived with each new tidbit of information, including the 2015 revelation that Andrew had flown with Epstein on his private jet, reportedly to his private island in the Caribbean, a locale where some women have alleged they were abused by Epstein and his guests. Newspapers pored through old photographs to discover that Andrew, Epstein and Maxwell were together at a wedding of the prince’s ex-girlfriend in 2000. That same year, Andrew had invited them to a huge party hosted by the Queen at Windsor Castle.

In recent years, Prince Andrew had rebuilt his reputation, in part by creating Pitch@Palace, a  program to help entrepreneurs with their business ideas. But in late 2018, that thread began fraying again thanks to a blockbuster investigation of Epstein, the girls he abused and his sweetheart plea deal by journalist Julie K. Brown of the Miami Herald. Federal prosecutors opened another inquiry into Epstein. On July 6, he was arrested on sex trafficking charges. As a result, the allegations against Andrew were once again in the news.

While Andrew isn’t named in the new criminal case against Epstein, his friendship was mentioned in seemingly every story. Then, the day before Epstein died, a huge tranche of previously sealed legal filings was released relating to Giuffre’s defamation suit against Maxwell. Though most of the information was already known, the documents baldly lay out the allegations against Andrew, in particular one regarding Joanna Sjoberg, who was a young adult when she was recruited to offer sexual services in Epstein’s household.

In a deposition, she said she was with Andrew and Giuffre in Epstein’s mansion in New York City in 2001. “I just remember someone suggesting a photo, and they told us to go get on the couch,” she stated. “And so Andrew and Virginia sat on the couch, and they put the puppet, the puppet on her lap. And so then I sat on Andrew’s lap, and I believe on my own volition, and they took the puppet’s hands and put it on Virginia’s breast, and so Andrew put his on mine.”

While Buckingham Palace’s communications department rarely responds to stories, it did to this one, repeating almost word for word what it had stated in 2015, during previous revelations, “This relates to proceedings in the United States, to which the Duke of York is not a party. Any suggestion of impropriety with underage minors is categorically untrue.”

Last Sunday, the Daily Mail published grainy video it says was shot in 2010 showing Andrew at the door of Epstein’s mansion, waving goodbye to a young woman. That day, Buckingham Palace released yet another statement: “The Duke of York has been appalled by the recent reports of Jeffrey Epstein’s alleged crimes. His Royal Highness deplores the exploitation of any human being and the suggestion he would condone, participate in or encourage any such behaviour is abhorrent.”

The wording in that statement—especially “recent reports” of Epstein’s “alleged crimes”—was remarkably tone deaf, as Epstein’s crimes and conviction had been known since 2008. If Andrew had thought the statement would calm the swirling scandal, he was soon disabused of that notion when the Palace’s words provoked even more attention and criticism.

What is extraordinary about their response is that Andrew and his advisors must know this scandal isn’t going to go away like it did in years past, or like so many other royal scandals that Andrew has been able to weather. And those statements wouldn’t be enough to tamp down speculation.

Interest in Epstein, and how he was able to resurrect his social life thanks to his continued friendship with powerful people like Prince Andrew, is keen. Every detail makes headlines. This week, a woman told the Daily Mail that she, then a young adult who was giving Epstein sexual massages, stayed at Balmoral Castle in 1999 with Epstein and others as guests of Andrew. More documents are soon to be unsealed and released from that defamation suit, and the media will scrutinize them for any mention of Andrew. New lawsuits are being filed seemingly daily. And the criminal investigation is progressing.

UPDATE: On Saturday, Aug. 24, 2019, nearly a week after that last comment from Buckingham Palace, Prince Andrew released a long statement under his own name:

It is apparent to me since the suicide of Mr. Epstein that there has been an immense amount of media speculation about so much in his life. This is particularly the case in relation to my former association or friendship with Mr. Epstein.

Therefore I am eager to clarify the facts to avoid further speculation.

I met Mr. Epstein in 1999. During the time I knew him, I saw him infrequently and probably no more than only once or twice a year. I have stayed in a number of his residences.

At no stage during the limited time I spent with him did I see, witness or suspect any behaviour of the sort that subsequently led to his arrest and conviction.

I have said previously that it was a mistake and an error to see him after his release in 2010 and I can only reiterate my regret that I was mistaken to think that what I thought I knew of him was evidently not the real person, given what we now know. I have tremendous sympathy for all those affected by his actions and behaviour.

His suicide has left many unanswered questions and I acknowledge and sympathise (sic) with everyone who has been affected and wants some form of closure.

This is a difficult time for everyone involved and I am at a loss to be able to understand or explain Mr. Epstein’s lifestyle. I deplore the exploitation of any human being and would not condone, participate in, or encourage any such behaviour.

Whether the prince did anything criminal isn’t known, but that gleaming sword is still above his head, and the thread continues to fray.