When it comes to the Queen and Donald Trump, the facts still matter

No, the Queen did not 'brooch-troll' the U.S. President—a reminder that people across the political spectrum are all too eager to not let facts get in the way of a good story 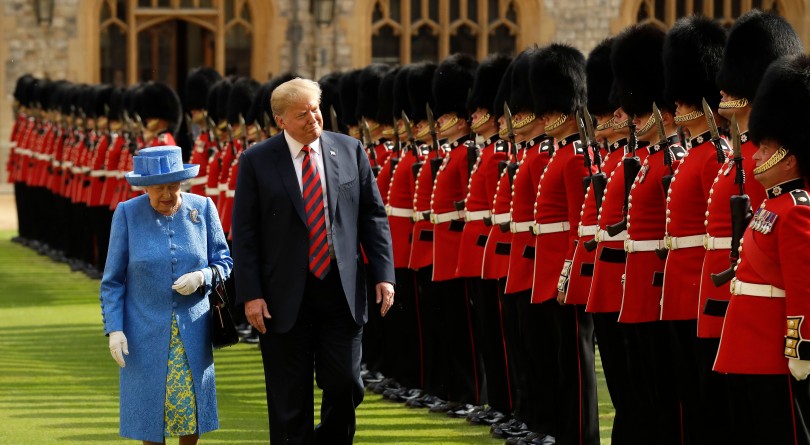 Britain's Queen Elizabeth II (L) and US President Donald Trump (R) inspect the guard of honour formed of the Coldstream Guards during a welcome ceremony at Windsor Castle in Windsor, west of London, on July 13, 2018 on the second day of Trump's UK visit. (Matt Dunham/AFP/Getty Images)

That I’m writing a story devoted to whether Queen Elizabeth II “brooch trolled” U.S. President Donald Trump during his visit to Windsor Castle and if he lied about how long it has been since the Queen inspected a guard of honour proves one thing: It is most definitely 2018.

Such is the love-hate divide in the United States (and the world) regarding Trump that people are far too eager to latch onto easily debunkable narratives in their quest to claim the moral high ground above the Republican politician. Other pro- or anti-Trump stories are accepted on face value without question, depending on which side you’re on.

This time, a 92-year-old monarch who is beloved and respected for her decades of service to Britain and the Commonwealth is having her sterling reputation besmirched as she is yanked into the maw of partisan hyperbole that swirls around Trump. After a single tweet-storm went viral thanks to those who firmly oppose Trump, countless numbers of people around the world now believe the head of state of Britain used her jewellery to mock the head of state of the United States.

Trump’s administration has undertaken an assault on the truth. We need to cling to the truth wherever possible. So in that vein, a fact-check is in order.

First, my bona fides: I was the chief of research (top fact-checker) at Maclean’s, Canada’s national magazine, for two decades. I’ve double-checked everything from massive justice investigations to singer Leonard Cohen’s legal and financial woes. And for the same amount of time, I’ve been a royal reporter, writing on everything from King Richard III’s bones to Kate’s hair-and-hem issues. I’ve been on countless royal tours here in Canada while at Maclean’s and as a full-time independent royal reporter. In addition, I’ve always been fascinated by the Queen’s brooches. I’ve researched and written about them for years.

The story began with an excitable Twitter thread by @SamuraiKnitter. She looked at a royal blog, “From Her Majesty’s Jewel Vault”, that focuses on the Queen’s rather spectacular jewellery collection, noticed her brooch selections for last week, and decided the Queen used her brooches to take shots and send shade at the U.S. President.

Before delving into her brooch theory, she sets up Trump’s visit with a popular falsehood, “BTW, he let her wait 12min for him to show up for tea.” In fact, Elizabeth II was early. The optics of a 92-year-old waiting for the Trumps to arrive looked terrible on live television, but Trump wasn’t late.

Then, Samurai Knitter began her “brooch trolling” assertions by claiming that “Arrival day was the one that got the most attention. That day, she wore the brooch the Obamas gave her on their last visit to England.” Yes, the brooch fact is correct: The Queen did wear the small moss agate floral brooch given by Barack and Michelle Obama during the Trumps’ state visit. However, the Queen wore it on a visit from the Anglican Archbishop of Canterbury and the Grand Imam of Al-Azhar, which hardly got “the most attention.” In fact, it got virtually no attention at all: There was nothing in the London media. In fact, only a few (standard) handout photos marked the meeting. Also, the tiny brooch is almost lost on her floral dress, in part because the Queen often matches brooches to her dresses. If that’s “regal brooch trolling,” then she needs lessons on how to get maximum publicity.

The thread also spawned the belief that the Queen wore the Obama-gifted brooch during her meeting with Trump. For example, Charlotte Clymer, a member of the Human Rights Campaign’s communications team with more than 150,000 Twitter followers*, tweeted that the Queen achieved an act of “masterful trolling.” Using the spreading viral story as a basis, news organizations around the world ran with “brooch trolling” stories.

Problem is, that’s not what happened:

The tweet-storm also makes a mistake around timing. She went on: “Next day, next brooch. This was a day of audiences with people, she does that to maintain the Commonwealth at least one day a week. That day was the King and Queen of Belgium for tea as well. She wore a sapphire brooch.” Except it wasn’t the “next day,” July 13, but rather Saturday, July 14. It wasn’t a “day of audiences with people.” The Queen rarely works on the weekend; she is 92, after all. Don’t believe me? Check the official record of the royal work schedule. It’s called the Court Circular. And also, it isn’t a day “to maintain the Commonwealth”; Belgium isn’t in the Commonwealth. The Belgian royals were in Britain for a weekend military event and stopped by to visit Queen Elizabeth II, because that’s what royals do.

Then, Samurai Knitter claims the Queen’s Canadian snowflake brooch was a show of strength in the face of Trump’s trade aggression toward Canada: “From Canada. You know, who Trump’s been screaming about and insulting. The commonwealth country and one of the UK’s greatest allies. Them.” One problem: she wore that brooch, given by the Governor General of Canada to the Queen of Canada (Elizabeth II is our Queen, for those who don’t know) in London last year, to a meeting with the King and Queen of Belgium. (I wrote everything you’d want to know about the brooch here.) Like the Obama brooch-dress combo, it is all but hidden on the matching blue-and-white patterned dress. And we’d have never seen a photo of the Queen wearing the brooch if it weren’t for a handout photo that wasn’t even from the British royal household but rather the Belgian palace. Buckingham Palace handed out nothing. So again, wearing a Canadian brooch to quietly meet with Belgian royalty is a rather pathetic form of “brooch trolling,” no?

Okay, then: What about the brooch the Queen wore when she actually met the Trumps? It was the diamond palm leaf brooch that she inherited from her mother. There’s no American or Commonwealth connection, yet Samurai Knitter is able to spin even that into another instance of “brooch trolling”: “QE rolled up to tea with the Trumps [sic] wearing the brooch her mother wore to her father’s STATE FUNERAL.” Well, yes, that’s true—though what that has to do with the Trumps isn’t clear. It’s also true that the Queen wears that brooch a lot, such that it’s become one of Queen Elizabeth II’s go-to brooches; after all, it was one of her beloved mother’s favourites.

Then there’s this: the entire conspiracy is premised on the idea that the Queen would jettison 66 years of service as an apolitical head of state to spark an international political incident by sassing Trump. This, despite 66 years of regal past precedents in the form of regal brooch-wearing to events with a litany of controversial political leaders with precisely zero instances of the Queen “brooch trolling” any of them. This, despite the fact that longtime royal watchers and experts, myself included, said the entire idea was laughable.

Instead, brooch truthers simply insisted we prove that the Queen didn’t do it—that is, demanding a refutation of wild speculation to prove fact, rather than seeking out the evidence first. This proof-by-negation is akin to fastidiously believing in the tooth fairy simply because no one has seen proof that the tooth fairy doesn’t exist. That is noxious thinking—and, as little as folks who oppose Trump would like to hear, it’s exactly the kind of aggressive, close-minded speculation that fuels fake news, Trumpian rhetoric, and political divisions.

In the end, either the Queen threw away 66 years of being the epitome of the perfect head of state by dissing Donald Trump via her brooches in the most circumspect manner possible—or she put on some brooches. It may not be proof, but burdens of proof still need to matter.

It wasn’t even the only anti-Trump ridicule raised in the wake of the royal visit. On Tuesday, the President said that the Queen “reviewed her honour guard for the first time in 70 years, they tell me. We walked in front of the Honor Guard and that was very inspiring to see and be with her.” On first read, it’s easy to discount as yet another fantastical Trump boast. There is no doubt the Queen has inspected countless guards of honour, in Britain and abroad, during her time as princess and then monarch. His comments were widely mocked: predictable headlines emerged that “Trump falsely claims Queen inspected guard of honour for first time in 70 years because of his visit,” while Trump critic and Atlantic senior editor David Frum called it “an especially weird and pointless Trump untruth.”

Except that the inspection with Trump at Windsor Castle actually was different—perhaps even unique.

For decades upon decades, the protocol was set: when heads of state inspected a guard of honour in Britain, the Queen stayed on the reviewing dais and her husband, Prince Philip, accompanied the head of state as that leader inspected (or reviewed) the guard of honour by walking down the row of soldiers standing at attention. Philip did it for decades, including for King Felipe of Spain in 2017 and for Barack Obama in 2011. But Prince Philip retired from royal duties last year.

Since then, there’s been no guard of honour for a foreign head of state to inspect. So, when it came time for Trump to inspect a guard of honour in Britain, it was the Queen herself who left the dais and escorted the American president as he walked down the line of Coldstream Guards standing at attention.

I’ve scanned royal reference books, asked at least three royal experts both in Canada and Britain and none of us can recall an instance when the Queen walked beside a foreign head of state as that leader inspects a guard of honour in Britain. We’ve gone back many, many years of her long reign and can find no other example of such an instance. That seems to be what Donald Trump is referring to, albeit in a clumsily worded way. And indeed, if it was the first time, then the Queen would most certainly have mentioned it to him while they had tea at Windsor Castle. Would Trump have understood and remembered her precise phrasing—that she was escorting another head of state—in order to repeat the claim absolutely correctly? Unlikely. It is an badly phrased boast. But if I’ve interpreted it correctly—and I’m confident I have—then it is factually correct.

Yes, Donald Trump is known for his verbose dishonesty. Daniel Dale, the Washington correspondent for the Toronto Star, has tracked his falsehoods and outright lies, and there are a lot of them: 1655 in 500 days, or 3.3 per day, as of early June. It is reasonable to jump on him when he, the most powerful politician in the world, assaults the truth. But that doesn’t make it acceptable for anyone else to assault it either when he isn’t lying. Doing so would be to live in his world.

CORRECTION, Jul. 19, 2018: The original version of this post incorrectly identified Charlotte Clymer as a member of Hillary Clinton’s communications team. She is part of the Human Rights Campaign communication team. Maclean’s regrets the error.