Why are Prince Harry and Meghan Markle getting married at Windsor Castle?

Prince William and Kate's wedding was a massive affair. But the intimate setting of St. George's Chapel, inside Windsor Castle, has a lot going for it 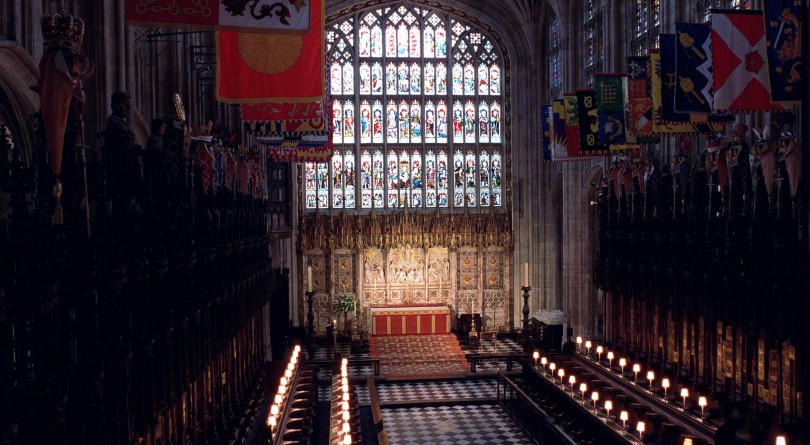 WINDSOR, UNITED KINGDOM - MAY 14: The Quire In St.george's Chapel. Above The Garter Stalls Hang The Banners Of The Knight Of The Garter, Below Which Are Displayed Their Crests, Helmets And Swords. The Wedding Of Prince Edward And Sophie Rhys-jones Took Place Here And The Royal Family Sat On The Right Hand Side. (Photo by Tim Graham/Getty Images)

Prince Harry and older sibling Prince William are as close as brothers can be. Born two years apart, they both went to Eton College and the Royal Military Academy Sandhurst. They both flew helicopters in the military. They play soccer and polo together. They live around the corner from each other in the huge Kensington Palace complex (after William and new wife, Kate, moved out of Nottingham Cottage, Harry moved in). They often appear together at royal engagements, and, with Kate, they use their eponymous charitable foundation to talk frankly about mental health issues.

Yet their weddings will be markedly different.Prince William wed Kate Middleton in historic, cavernous Westminster Abbey in front of 1,900 guests, including politicians, governors general and a smattering of crown princes and princesses. Labelled a semi-state occasion, the 2011 nuptials were a wedding befitting the second in line to the throne. Hundreds of thousands gathered outside Buckingham Palace to see William and Kate kiss on its balcony. Prince Harry, meanwhile, has the luxury of having the wedding that suits him and fiancée Meghan Markle, and given that he will fall to sixth in the line of succession upon the birth of William and Kate’s third child—and thus have little chance of inheriting the throne—the strictures of protocol and duty attached to his wedding are dramatically relaxed.

As Harry is well known for his dislike of the intense public and media attention he endures, a grand London venue was rejected in favour of St. George’s Chapel, a lower-profile, more intimate royal chapel, tucked within the privacy and protection of the ultimate royal residence, Windsor Castle. It’s the favourite home of the groom’s grandmother, Queen Elizabeth II, who spends more and more of her work weeks there, harkening back to her childhood when she lived there with sister Margaret, safely away from the Nazi bombings of London during the Second World War.

Windsor Castle, the construction of which was started by William the Conqueror, has dominated the town of Windsor and the surrounding countryside for more than 900 years and is now the world’s largest occupied castle, as well as a major tourist attraction. Located 40 km outside London, it’s also very familiar to Harry, who was baptized there in 1984, and who was educated a stone’s throw away at Eton College. It’s also where the civil marriage between his father Charles and his stepmother, Camilla, Duchess of Cornwall, was held in 2005.

Inside the castle’s thick walls is St. George’s Chapel. It is gloriously beautiful, with perpendicular Gothic walls capped by a carved, fan-vaulted ceiling and ornate stained glass windows. The original chapel, built as the Chapel of St. Edward the Confessor by King Henry III in the early 13th century, was renamed to honour England’s patron saint, Saint George, in 1348. In 1475, the current building was constructed under Edward IV. It is a “royal peculiar”: that means its dean is responsible only to the Queen, as defender of the Anglican faith, not to the local diocese of the Church of England. Home to the Order of the Garter, the oldest order of chivalry, it is also where 10 monarchs are buried, including the Queen’s father, King George VI. Her sister Margaret, as well as Queen Elizabeth the Queen Mother, are also buried there.

It’s also marked some of the happiest moments in the royal family’s history, from baptisms to numerous royal weddings in its history. A surfeit of royals, including of Queen Victoria’s children and grandchildren, were wed there. And in recent years, it’s where the current Queen’s fourth child, Prince Edward, married Sophie Rhys-Jones in 1999.

St. George’s Chapel is spectacular from every conceivable angle, inside and out—an important consideration given the wedding will be broadcast around the world. (Privacy is a relative term when the groom is Prince Harry.) Some 600 guests, largely family and friends, are invited to the noontime service.

And while there won’t be a balcony scene like the one William and Kate had at Buckingham Palace before cheering throngs of well-wishers, the wide stairs of St. George’s Chapel allow for photogenic scenes of the newlyweds and their families after the wedding. Instead of the huge crowds that witnessed the festivities in London for William and Kate’s nuptials, only some 2,640 people will see the comings and goings firsthand from coveted locations inside the castle. They include 1,200 British residents chosen by Britain’s lord lieutenants—the Queen’s personal representatives in counties and regions of the country—as well as 300 local residents and students and 1,140 staff and residents of Windsor Castle and the Crown Estates.

Indeed, most of the spectators expected to flood Windsor for the wedding won’t see much at all. The only royals viewed by anyone standing in the streets of the town of Windsor will be the newlyweds and their wedding party as they go for a carriage ride through the town before returning to the protected confines of the castle for their wedding reception.

In addition, Windsor Castle has another big advantage when it comes to weddings: it has Frogmore House, a secluded royal retreat located in the castle’s home park off the Long Walk that has long been a favoured sanctuary for the Windsors, and will be the location of an ultra-exclusive wedding dinner for Meghan, Harry and 200 guests hosted by Prince Charles. The house dates from the Georgian era, while its extensive gardens are where young royals have learned to ride bicycles and the family enjoyed picnics away from public scrutiny. (Frogmore House and its gardens are opened only opens a few days a year, for charity.) It’s no coincidence that Frogmore is also where the first official photos of Prince Harry and Meghan Markle were snapped.

It may not be the ideal wedding for royal watchers hoping to see all the happenings in Windsor—but it will be the perfect day for Prince Harry and Meghan Markle. And since it’s their wedding, that’s what matters most.