Why can't Princess Eugenie and Princess Beatrice get any respect?

Princess Eugenie's wedding may share a location with her cousin Prince Harry's, but it won't be the same—and that speaks to the problem the royal family's York sisters face 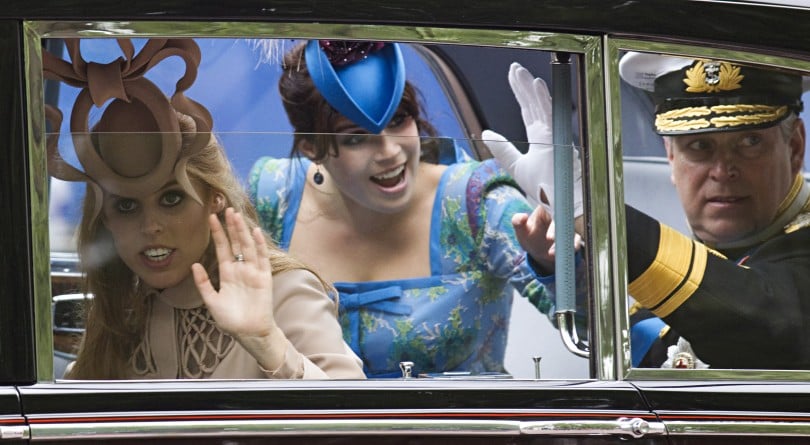 Prince Andrew, Duke of York and his daughters Princess Beatrice (left) and Princess Eugenie (centre) wave as they travel along the processional route to Buckingham Palace after the royal wedding of Prince William, Duke of Cambridge and Catherine, Duchess of Cambridge at Westminster Abbey on April 29, 2011 in London, England. (Warren Allott - WPA Pool/Getty Images)

On Oct. 12, for the second time this year, a grandchild of Queen Elizabeth II will marry at St. George’s Chapel in Windsor Castle. Yet, unlike the first, when the world watched Prince Harry marry Meghan Markle, these nuptials—between Princess Eugenie of York, the younger daughter of Prince Andrew and his ex-wife Sarah Ferguson, Duchess of York, and Jack Brooksbank, a 32-year-old brand director for Casamigo Tequila, co-founded by actor George Clooney—are being overshadowed by clouds of controversy. It’s seen as too extravagantly royal for someone so far away from the throne; too expensive for taxpayers footing its security bills; and yet another opportunity for the bride’s father to try to upgrade Eugenie and her older sister, Princess Beatrice of York, to full-time working royals.

The reason? Well, like any old wedding, it comes down to family drama—this one just happens to be writ larger by royal proportions. And while the wedding will surely be a happy one for the bride, groom, their families and friends, it also serves as a opulent reminder that Eugenie (and her older sister Beatrice) occupies an awkward place within the royal family and society itself.

The 28-year-old Eugenie maintains a high-profile social schedule, being photographed at parties and launches, going to Royal Ascot with her grandmother, and doing charitable work, including fundraising for the Royal National Orthopaedic Hospital, where her scoliosis was surgically corrected. But she and her sister also have full-time jobs: Eugenie has worked her way up in the art world to be an associate director at the international firm Hauser & Wirth while Beatrice has bounced from job to job, both in Britain and the United States, and is now vice-president of partnerships and strategy at the software firm Afiniti. But unlike other adult grandchildren of the Queen, who don’t undertake full-time royal duties and are expected to work for a living, such as Zara Tindall (who won silver at the London Olympics), the York sisters do have full royal titles; the bride is Her Royal Highness Princess Eugenie of York. This quasi-royal, quasi-private status is the source of much of the tension.

It doesn’t help that she and Beatrice are also the children of a royal couple who have generated decades of decidedly negative headlines. Some low moments include tabloids filled with photos of Fergie having her toes sucked by a lover; headlines about Fergie’s extravagant lifestyle, which led to continued huge debts; Fergie being caught on video trying to sell access to her ex-husband, then Britain’s global trade ambassador; Andrew’s friendship with American sex-offender billionaire Jeffrey Epstein that, when revealed, forced him to resign as trade envoy; Andrew’s close relationship with ultra-rich members of the repressive Kazakh elite, including a billionaire who bought their old marital home, a present from the Queen, for well above its asking price after it sat for years on the market, only abandon and then tear it down.

Today, Andrew and Sarah, though divorced for years, share his home, the Royal Lodge, outside Windsor Castle. Sarah maintains a relatively low profile, often seen with her daughters or Andrew, who is still one of the busiest royals, often working on spreading his charitable creation, Pitch@Palace, where entrepreneurs showcase their ideas to a business audience.

Though discreet about their more famous royal relatives, Beatrice and Eugenie have had their own lesser scandals, including taking an eye-raising number of luxury vacations with celebrity friends while ostensibly holding down full-time jobs. They are still known most famously for the eye-catchingly ugly hats they wore to yet another wedding, that of Prince William and Kate Middleton in 2011. (Capitalizing on the notoriety, Princess Beatrice auctioned her “toilet-seat” fascinator hat for charity, raising more than US$130,000.) Their romances, philanthropic efforts and especially their fashion choices—now far more sophisticated and adventurous than those 2011 outfits—have been splashed across Britain’s papers for years.

That the princesses have to work clearly rubs at their father, who wants them to be full-time royals, like their cousins Harry and William, with all the perks that entails. After all, the biographies of Beatrice and Eugenie on Prince Andrew’s website focus almost exclusively on the charitable undertakings of the eighth and ninth in line of the throne, with only the last sentence referencing how they earn their living. But the most senior members of the royal family, especially Andrew’s older brother Prince Charles, have reportedly turned down Andrew’s pleas on his daughters’ behalf, preferring a more streamlined working royal family. Andrew’s continued agitation on behalf of his daughters has caused tensions with his relatives. 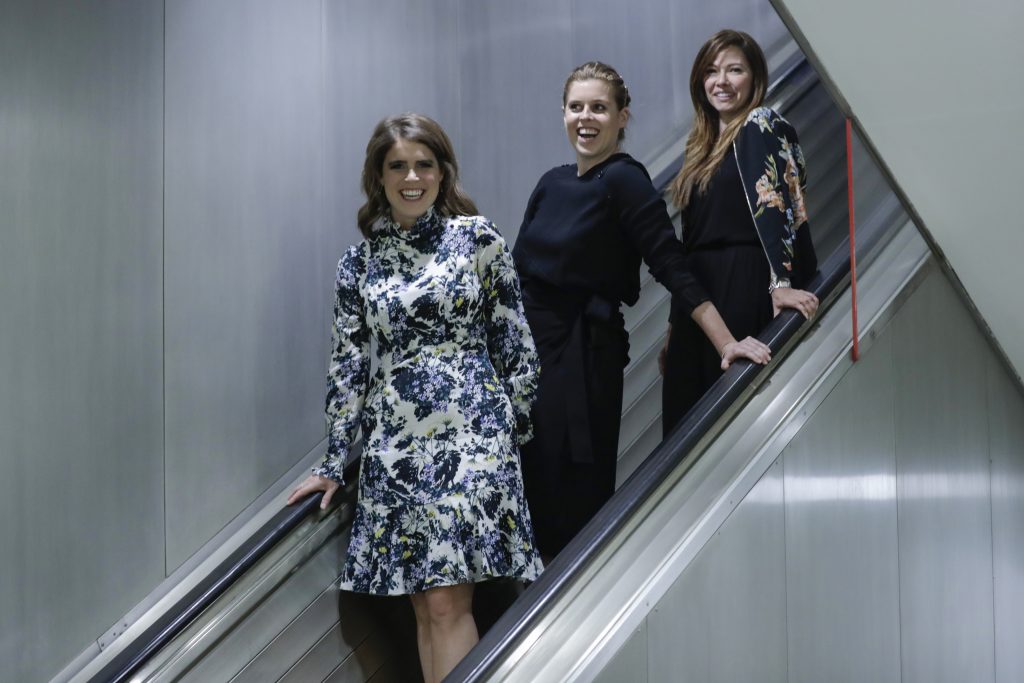 Princess Eugenie and her sister Princess Beatrice of York during the NEXUS meeting at the UN Headquarters in New York City. (Luiz Rampelotto/NurPhoto via Getty Images)

This wedding is likely not to help Andrew’s cause. By all indications, it will be as big, if not bigger, a social event than that of Harry and Meghan’s wedding, and much more elaborate than those of other “private” grandchildren of the Queen. While the Duke and Duchess of Sussex invited 600 guests, the upcoming nuptials are expected to be witnessed by upwards of 800 people. And, like the May event, everyone will enjoy a reception at Windsor Castle, hosted by the Queen. The evening festivities will be at the Royal Lodge. Undoubtedly, there is public interest in witnessing the wedding: around 100,000 people applied for 1,200 free tickets to watch the comings and goings from just outside St. George’s Chapel.

There were limits, however. While Meghan and Harry’s nuptials was carried live on virtually every major channel around the world, the BBC reportedly turned down a request by Eugenie’s father, Prince Andrew, to televise her wedding, a source told the Daily Mail. Finally, at the end of September, the private ITV network agreed to air the religious service as part of its morning show. And while the newlyweds will take a carriage ride through Windsor after the wedding, just as Prince Harry and Meghan Markle did, theirs will be on a shorter route. With road closures and parking restrictions, the security costs alone are estimated to be around $3 million.

Along with the anticipation of seeing the fashion choices of the bride and guests is the expectation of a certain amount of family drama. The mother of the bride has been largely exiled from public royal gatherings because of years of impropriety. Though invited by Prince Harry to his wedding, she stayed well out of frame of the rest of the Windsors, especially 97-year-old Prince Philip, who is implacably opposed to her re-entry into the clan. Yet, for this event, Sarah will occupy a prominent position of honour. How her former father-in-law will react is anyone’s guess.

If the drama is affecting Eugenie in the lead-up to the wedding, it isn’t showing. “It’s nerve-wracking because you want it to be perfect, but then you realize that you’re going to be with the person you love forever and nothing else really matters,” she said to British Vogue. “It’s about how we feel, but also how our family and friends feel. I want it to be beautiful and fun and to bring out our personalities as much as possible.”

And in the end, Princess Eugenie will get almost all she wants. Sure, she’ll work for a living, but in the end, as she slips further down the line of succession, it’s likely a path she will welcome, especially as the fierce, sometimes savage media attention she endures wanes. Plus, she gets to keep the best parts of any fairy tale: a man she loves, a wedding of her dreams, and even a house within the sprawling confines of Kensington Palace in London.

Both Eugenie and Beatrice have their admirers today. But respect for their accomplishments should increase once they aren’t overshadowed by their parents—and their machinations.