Will Meghan Markle wear a tiara on her royal wedding day? 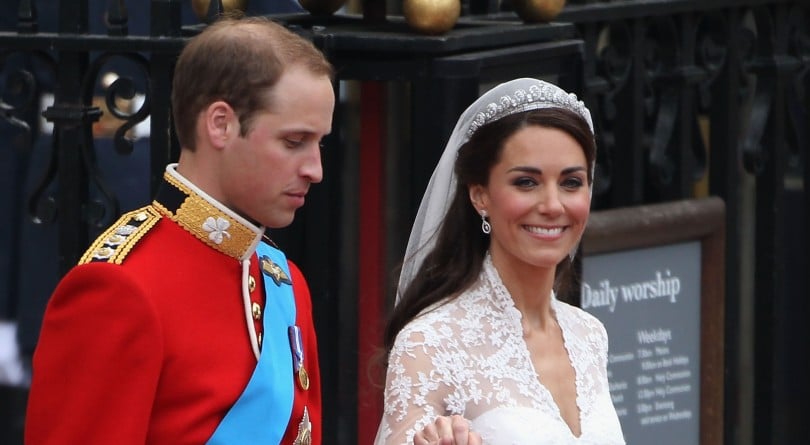 LONDON, ENGLAND - APRIL 29: Their Royal Highnesses Prince William, Duke of Cambridge and Catherine, Duchess of Cambridge exit following their marriage at Westminster Abbey on April 29, 2011 in London, England. The marriage of the second in line to the British throne was led by the Archbishop of Canterbury and was attended by 1900 guests, including foreign Royal family members and heads of state. Thousands of well-wishers from around the world have also flocked to London to witness the spectacle and pageantry of the Royal Wedding. (Photo by Dan Kitwood/Getty Images)

Meghan Markle’s style choices for her wedding to Prince Harry on May 19 have obsessed social media (heck, huge chunks of the internet) since they got engaged in November. While fashionistas debate who is designing her dress—Erdem has the pole position in that race—royal jewellery watchers are talking tiaras.

Wearing a glittering diamond tiara is a rite of passage for royal brides. Indeed, it’s exceedingly rare for a British royal bride not to wear a tiara as they walk down the aisle. In the last four decades, only three wore flowers instead of diamonds for a church wedding: Princess Anne at her second wedding in 1992; Lady Davina Windsor, daughter of HRH the duke of Gloucester in 2004, and her mother, Birgitte van Deurs, at her own wedding in 1972.

Who wouldn’t wear a tiara, especially when given the option of picking one from the royal family’s legendary collection? So if Meghan wears one, it will likely be a loan from Queen Elizabeth II, who has at least 17 tiaras and is increasingly loaning her collection to the younger women in the House of Windsor. A few tiaras can be crossed off the loan list, either because they are too big (the Delhi durbar tiara is a humongous circlet) or too identified with other royals (such as the Queen’s iconic Vladimir circlet tiara, worn with either pearl or emerald drops).

READ MORE: Why most of Meghan Markle’s family won’t make it to the royal wedding

Wedding tiaras tend to be light and/or small, since they are usually worn for hours by nervous brides unused to having jewellery affixed to their heads. They should be fastened into the hair style by experienced hairdressers, otherwise they can fall off, or move precipitously; the tiara of Stéphanie de Lannoy flipped backward during her wedding to Hereditary Grand Duke Guillaume of Luxembourg in 2012. In fact, there are strict rules governing how to correctly wear a tiara, as Andrew Prince, who designed much of the crystal pieces for Downton Abbey, explained to Maclean’s in 2014.

The Queen, and later her daughter Princess Anne, wore a fringe tiara to their weddings (it had to be hastily repaired after breaking on Elizabeth’s big day.) In 2011, Kate Middleton borrowed the Queen’s halo tiara. The small tiara of diamond scrolls was made by Cartier and given by the future King George VI to his wife, Queen Elizabeth (later the Queen Mother, Prince Harry’s great-grandmother). It hadn’t been seen since Princess Anne wore it in the 1970s.

The enigma around tiaras is only heightened by the way British royalty treat the items. Some women have a habit of quietly breaking up outdated items to make new pieces. Others stick unwanted items into vaults for a few decades; indeed, after many years of rumours, the Queen Mother’s floral tiara, a wedding gift from her parents, was proved to still exist when it was photographed for a book. Others still remain mysteries: In the 1950s, Princess Margaret often wore a spectacular Russian diamond sunray tiara that featured a huge sapphire which purportedly could have been removed to serve as a brooch. Today, its whereabouts are unknown.

Then there’s the ornate Spencer family tiara, worn by Harry’s mother, Lady Diana Spencer, in 1981. Today it belongs to her brother, Earl Spencer—but it could be an option for Markle. “It’s possible,” says Ella Kay, who has been writing about royal jewellery for a decade and runs the popular Court Jeweller site. “A lot who love Diana would love Meghan to wear it.” Still, Kay is doubtful the famous tiara will be placed on Meghan’s head. More recently, Princess Anne loaned her own delicate tiaras to daughter, Zara, and daughter-in-law, Autumn, for their weddings.

“I want to see her wear the Cartier bracelet tiara,” Kay dreams. The bandeau-style tiara is simple, sleek and very modern—very much Meghan Markle’s style. “It’s cool and Deco-y, and she can pull it off,” Kay believes. The tiara is made up of three Art Deco diamond bracelets mounted onto a metal tiara frame. Its best feature is its versatility: The Queen inherited five identical Cartier bracelets, given to her mother by her father early in their marriage. Two are all-diamond versions, while the others have baguette rubies, emeralds or sapphires inset into the middle of the diamond bracelets. So, if chosen, the tiara would add a subtle splash of colour to Meghan’s wedding day styling.

The royal family could also throw a curveball by acquiring something new. Now that the days are past of bestowing new royal brides with an extensive jewellery trousseau, royals often purchase a tiara for the bride of a monarch’s younger sons, thereby making sure historic pieces don’t end up leaving the family in a divorce. Sarah Ferguson wore a newly bought antique tiara for her wedding to Prince Andrew, while Sophie Rhys-Jones wore one believed to be an amalgam of pieces from a tiara originally belonging to Queen Victoria when she married Prince Edward in 1999.

Meghan could also switch it up, a la Princess Charlene of Monaco, who wore an elaborate diamond hair ornament affixed to her low bun, then donned a new tiara for the wedding’s evening celebrations. Or perhaps she won’t wear any diamonds in her hair at all. In the end, it’s up to the bride. All everyone else can do is wait and watch.