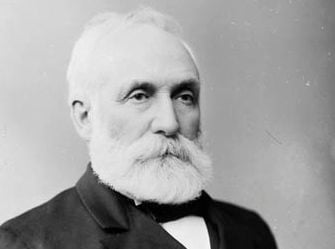 1. Rt. Hon. Sir Mackenzie Bowell: Without question Canada’s greatest bearded prime minister, as long as one cares only for beards and not, say, political achievement. Bowell’s beard had a depth rarely seen on politicians of any era. It was polar bear white and somehow, despite being considerably wider than his face, a near-perfect half-circle.

2. Rt. Hon. Sir Charles Tupper: Business in the front, party on the sides. Tupper’s near legendary ’burns extended well past the chin line and out what must have been a full two inches from his face, giving them the look of giant dangling earrings made of fur.

3. Hon. Alexander Mackenzie: Mackenzie loses points for looking, in his official portrait, like a ghost. He had haunted eyes, but luckily his beard was all class, a bristly white duckbill that extended down nearly to his chest.

4. Rt. Hon. Sir Robert Borden: A classic ’stache, full but not messy, parted exactly in line with his hair and twirled up just slightly at the ends: the Tom Selleck of Canadian prime ministers. Lanny MacDonald could learn something from this handsome devil.

5. (tie) Hon. Sir John Abbott and Rt. Hon. Sir John Thompson: Both bore sideburns of no great depth or distinction. However, given the shamefully smooth faces of Canada’s prime ministers post-1920 (Kim Campbell gets a pass), they sneak onto the list. (Ed note: Depending on the results of the next federal election, most experts consider this Thomas Mulcair’s position to lose.)