6 reasons why Princess Anne is the best royal

Answering the questions, "Are you serious?" and "Why?" 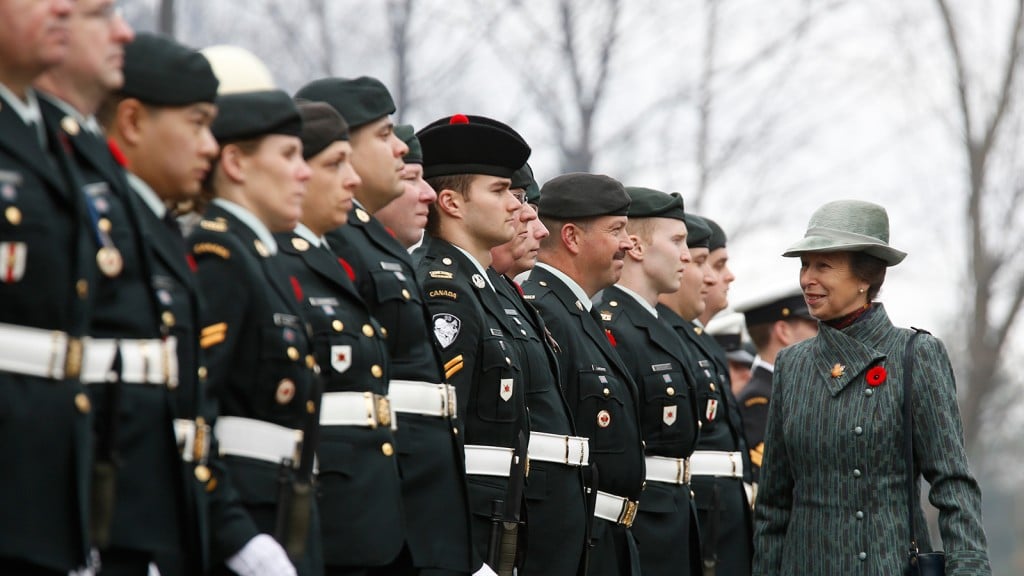 The highlight of Princess Anne’s two-day official visit to Canada is the re-dedication of the National War Memorial in Ottawa. The inscription “In Service to Canada / Au Service du Canada” is being added, along with dates of the Afghanistan mission and the South African War. In her roughly 48 hours in her mother’s northern realm, she’ll knock off 11 engagements including giving medals to RCMP officers, and visiting the National Military Cemetery.

Whenever people hear that Princess Anne is my favourite member of the house of Windsor, they invariably ask two questions: “Are you serious?” and “Why?” Sure Queen Elizabeth II has been a remarkably good sovereign, her husband, Prince Philip, a charming rogue (with grandson, Harry, following in his footsteps) and Prince Charles is a rather revolutionary Prince of Wales, but I’ve got a soft spot for Anne.

So, for the record, here are my answers as to why she’s my favourite royal:

1. Her children. She and ex-husband, Mark Phillips, have two children, Peter and Zara. They are about as normal and professional as is possible while still being seen on the balcony of Buckingham Palace. As the Queen’s first grandchildren they could have had any title they wanted, but their mother said no. She wanted them to grow up to be normal kids whose grandmother just happens to be the Queen. They went to the local school near their parent’s country home, Gatcombe Park, before going to Gordonstoun, their grandfather’s beloved school. Today both have careers—Zara is a professional equestrienne who won a team silver in three-day eventing at the London Olympics while Peter is the managing director of Sports & Entertainment’s British division. For Anne’s 60th birthday, they opened up about their mother. As Hello stated, “brother and sister recall how their mother apparently let one of her dogs loose during a local rugby match to ‘tactically’ help Peter’s team win. And, according to her son, she jumped up and down screaming ‘start, start’ when Zara didn’t hear the bell at the Eventing World Championships in 2006—Zara went on to win and was crowned Sports Personality of the Year, 35 years after her mum achieved the same feat.”

She also instilled ferociously good manners into her children. Zara’s curtsy is perfect and low, especially when meeting the Queen. “I curtsy to her every time I see her,” ” she said in 2008.” She is my grandmother and she’s very approachable but she’s also from an era when that was how it was done.” It doesn’t matter the circumstances.  Earlier this year, Peter’s Canadian wife, Autumn, was seen curtsying to the Queen at a horse show. Autumn was in a casual T-shirt and white jeans, the Queen in the driver’s seat of her car.

“I look at her and just think if I was going to be a mother, that’s what I would want to be like,” Zara told the BBC. “I would like to be as good a mother as she has been to us.”

Now she’s a grandmother of three, and, if pictures are any account, appears to be having a whale of a time.

2. Her charitable work. She’s 64, but has no intention of slowing down. In the last decade, she’s done an average of 483 engagements a year, often starting in the morning and not ending until nearly midnight. She’s not paid a salary, rather her expenses and those of her staff are paid personally by the Queen.

Because she rarely seeks, or gets, the limelight—she’s not the monarch, not the heir, or second in line, and isn’t remotely concerned with fashion (see yesterday’s posting)—her engagements rarely get more than local coverage. Last month, the Express wrote about her trip to Africa in glowing terms. “The 64-year-old spent last week in Ethiopia and Tanzania, travelling to remote areas in a tiny plane. “She regularly visits these sorts of places and it is in her nature to simply get on with it,” an aide commented. “The accommodation for this trip was beyond basic. They called it a hotel but it wasn’t, in the true sense of the word. That is just part and parcel of the princess’s work though. She does it all the time without fanfare. Nothing will stop her.” Anne was there to see work carried out by Save the Children (she’s been its president since she was 20), and the Vine Trust, an Edinburgh-based charity, with which she’s been involved since 2009. As the Vine Trust’s Christine John told the newspaper, “She opens doors and connects people. She is never backward in coming forward about her expectations. She is not just a figurehead, she knows the brief back to front and she delivers. She has never failed us.”

Travelling with two police bodyguards, her secretary and an assistant, Anne knew the dangers of travelling to East Africa. As the Express wrote, “Islamic extremists al-Shabab have made no secret of their desire to attack Western targets in the region. Although Buckingham Palace never comments on royal security, an aide says the princess ‘doesn’t mind’ the risk.”

It isn’t just her charitable work. She’s credited with playing a crucial role in bringing the 2012 Summer Olympics to London. British Olympic Minister Hugh Robertson said: “She is one of the great unsung heroes of this whole process. She played a key role in delivering the bid, she is president of the British Olympic Association and she has 30 years experience of international sport. Because she is who she is she never asks for any thanks or praise, but she has played a remarkable role in this, and it is completely unheralded and largely unthanked.”

In 1987, her mother gave her the rare title of “Princess Royal.” She’s earned it.

3. Her cool nature. She doesn’t have the imperious nature of her late aunt, Princess Margaret, but that doesn’t make Anne a “warm and fuzzy” personality. Instead, in a classic case of “what you see is what you get,” she’s known for being calm, cool and very much collected. While not a “hugs and kisses” type of royal, it’s also clear that nothing fazes her.

In 1974, there was an attempt to kidnap her when a mentally ill Ian Ball ambushed her car outside Buckingham Palace in March 1974. Her bodyguard, another policeman, her driver and a passing journalist were all shot. As the BBC later recounted, “In a document written for prime minister Harold Wilson, the princess said the only thing that had stopped her from hitting Ball was the thought that he would shoot her.” Any one getting too close to her quickly earns her version of the Queen’s freezing glare.

4. Insisting on being treated just like her brothers. Princess Anne isn’t a girly girl, but a tomboy shaped like her brusque father. Nothing appears to be too tough for her. When she fell during the cross-country portion of the three-day event at the Montreal Olympics in 1976, she insisted on getting back on her horse, even though she concussed and was out of the running for a medal. At military events, such as the Trooping the Colour, she usually wears the men’s version of a uniform. In 2002, when the coffin of her grandmother, Queen Elizabeth the Queen Mother, was being processed to Westminster Hall, she marched behind it, along with the other senior male members of the family. Not unexpectedly, her favourite expression is “naff off,” the upper-class version of f–k off.

5. Privacy. Rack your brains for a hint of scandal involving Princess Anne. There is one, though probably only royal watchers know the ins and outs. In 1989, intimate letters written to Anne by Queen’s equerry, then Capt. Tim Laurence, were stolen and offered for sale to a tabloid. Anne, then 39, was still married to Mark Phillips, while Laurence was a 34-year-old Royal Navy officer. A few months later, the royal couple separated. In 1992 they quietly divorced, and Anne married Laurence in Scotland. (In 2010 he retired from the Navy, having risen to be a vice-admiral.)

Since then, her private life is a blank. In 2012, she briefly made headlines when she asked for a smaller hotel room in Scotland. There while on a sailing holiday with her husband, she saved a whopping $60 by turning down a suite with a view of the sea. Her reasoning? They were just staying for the night, so why pay for something they couldn’t enjoy?

6. Her lack of concern for fashion. I love perusing royal style blogs. But there’s also something refreshing about Anne’s lack of concern regarding her own personal style. Even the Queen shows more concern for her own sense of fashion. Anne wears, and rewears, and wears again classically designed clothes, hats, sturdy purses and shoes and a ubiquitous pair of gloves.

For her 60th birthday in 2010, the Daily Mail ran a headline, “Why Princess Anne is the best king we never had.” For once the tabloid wasn’t engaging in hyperbole.