620 animals were killed in the making of this celebrity cookbook

Mario Batali, Susur Lee and Gordon Ramsay top a new report that ranks celebrity chefs based on the number of "sentient animal deaths" in their cookbooks

Decades of protest by animal-rights activists have shone a spotlight on how the modern food industry treats animals. A new report brings that focus into peoples’ kitchens by ranking 26 celebrity chefs based on the number of “sentient animal deaths” in 30 of their cookbooks. “The rise of the chef as celebrity has coincided with increased consciousness of ethical issues pertaining to food, particularly as they concern animals,” the report’s authors at the University of California, San Diego state. “Whether they intend it or not, celebrity chefs’ food choices and public meal recommendations are ethically significant.”

American chef Mario Batali grabbed the top spot in the ranking. In his book Molto Gusto: Easy Italian Cookin, fully 620 animals have to die to make every recipe in the book, with a 5.25 average per dish. (The average was determined by dividing the total number of animal deaths by the number of non-dessert recipes in each cookbook.) Among the 26 chefs, there were two Canadians: Susur Lee and Mark McEwan. Lee ranked second behind Batali, with 2.85 average deaths per recipe and a total of 268 in his book Susur: A Culinary Life, while McEwan scored a 0.63 average with 60 animals killed in Great Food At Home: Family-style Recipes For Everyday. 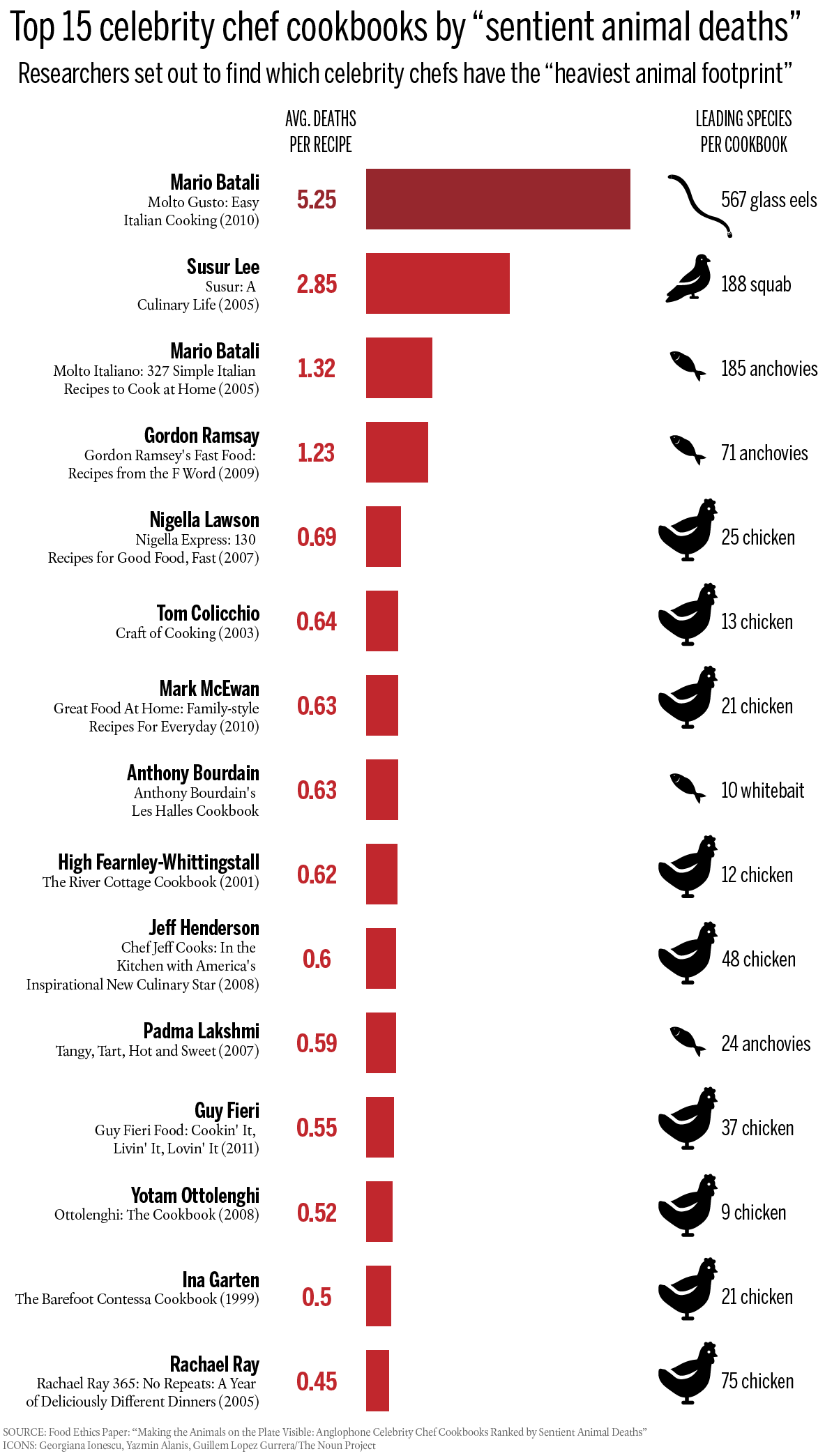 “The anti-Guy Fieri’s—Mario Batali, Susur Lee, chefs who are more open to exotic ingredients, the more ‘gourmet’ chefs—they were the ones who did the worst in our index,” says Andy Lamey, a professor who co-authored the report, admitting that he’s a “voracious consumer of reality TV.”

Lamey was slightly surprised by Anthony Bourdain’s results—an outspoken, charismatic American chef known for poking fun at vegetarians and vegans, and whose persona aims to be the “bad boy of the cooking world,” he says. “Bourdain just kind of came off as Mr. Middle of the Road.” Still, with the exception of the vegan chefs in the ranking, he says, the issue of how many animals needed to be killed in their cookbooks was “not on the radar of any chefs.”

That’s the case with McEwan. “I don’t have strong feelings either way about being included,” he said in an email to Maclean’s. He believes in moderation, he added, and doesn’t put much stock into the report’s results: “Across my restaurants, cookbooks, and McEwan Fine Food stores, we offer a wide range of food including vegetarian, vegan, pescatarian and meat options.”

Marni Ugar, an animal rights activist, thinks the report will make restaurant-goers think twice about choosing to sit down at a celebrity chef’s establishment. In recent weeks, Ugar has been the organizer of a protest outside Antler Kitchen and Bar, a Toronto restaurant that serves fois gras, the fattened liver of a goose or duck, and an assortment of game meat, among other dishes. (Owner Michael Hunter counter-protested; he was seen by as many as 50 protestors carving and eating a deer’s leg through Antler’s front window.)

Ugar says she’s faced steady criticism for “attacking” a local business, rather than going after bigger names and corporations. “My goal is to have a dialogue,” she says, noting that she’s had success when reaching out to local restaurant owners, one of whom made a menu change. “Is McDonald’s going to do that? Probably not,” she adds. Ugar’s entry into activism began about a year ago, and she plans to stay at the grassroots level. “What am I going to do? Sit at home and bake vegan cupcakes and say ‘come and taste them?’ That doesn’t work,” she says.

Lamey believes the report is part of the growing wave surrounding the ethics of food, and is adamant that his works does not take a side between those who are vegan and those who are actively trying to the reduce the number of animals they kill. “I hope that it’s clear that my research is not taking a side on either of those approaches—it’s meant to be compatible with either one,” he adds. Still, it reflects how much things have changed in recent years: “It’s hard to imagine a paper like this appearing 20 or 30 years ago.”