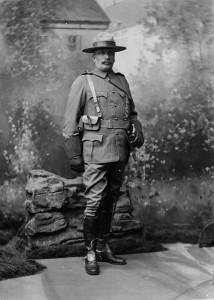 Born in 1849 in Purbrook, Upper Canada, the son of a British naval hero, Sir Sam Steele was a legendary figure and easily the most famous Mountie ever. He was also there at some of the most important moments of Canada’s early history.

1. Fenian troubles: Between 1866 and 1871, the American-based Fenian Brotherhood initiated raids on British Army forts and customs posts in Canada to encourage the British to quit Ireland. In June 1866, more than a 1,000 Fenians crossed into Ontario’s Niagara region and waged war with professional and volunteer troops. That year, at age 16, Steele joined the 5th (Simcoe) Battalion of Infantry and later established and trained his own militia to safeguard the nation.

2. Red River Rebellion: Steele volunteered for the Red River Expedition of 1870 raised to quell the “treasonous” provisional government established by Louis Riel in 1869. It was Canada’s first real crisis following Confederation in 1867, and the arrival of Pte. Steele and others in the force marked the end of the mutiny.

3. North-West Mounted Police and the Great March: Sam Steele was one of the first men to join the force, formed in 1873. He accepted a commission as a sergeant-major and was given regimental number 2—tasked with halting the whisky trade and bringing law to Canada’s West. In 1877, Steele was present at Fort Walsh, Sask., when U.S. Gen. Alfred H. Terry met Hunkpapa Lakota Sioux Chief Sitting Bull with his president’s promise of a “lasting peace.” Sitting Bull had sought refuge in Canada after the Battle at Little Bighorn.

4. Last Spike: Steele was in charge of policing the construction of the Canadian Pacific Railway, Canada’s first transcontinental rail line between 1881 and 1885. He acted as magistrate, settled labour disputes, acted as a judge and reined in gamblers and bootleggers in the course of his work. He was present on Nov. 7, 1885, when the “Last Spike” was driven at Craigellachie, B.C., to signal the completion of the CPR.

5. Northwest Rebellion: A second, more serious crisis occurred in 1884 when Riel and his followers established the provisional government of Saskatch- ewan. Steele interrupted his work on the CPR and gathered a force of 25 policemen and some 110 ranchers and cowboys to assist with quashing the insurrection. That April, he and his men subdued an insurgency by the band of Cree Chief Big Bear.

6. Klondike Gold Rush: With miners flooding into the Yukon, the North-West Mounted Police needed a good man to administer frontier justice. In 1898, Steele helped set up effective border posts to curtail the activities of Alaskan outlaw Soapy Smith, and with a force of only 13 cleaned up chaotic Dawson City–a boomtown of 14,000. In 1899, political cronyism saw Steele replaced.

7. Boer War: Steele was tasked with setting up the Alberta calvary regiment, Lord Strathcona’s Horse, in 1900, to fight in the Boer War. His unit performed well once it arrived in South Africa in May of that year–often doing forward scouting for regiments trying to eliminate Boer commandos. The Boer War marked Canada’s first official dispatch of troops to an overseas war. Steele would spend five years afterward as a commander organizing a civil police force in the South African Constabulary.

8. First World War: Upon the outbreak of war, Steele had hoped to command the 1st Canadian Division, but he was rejected because of his age. (He was by then 66.) Instead, he helped organize and train the 2nd Division until its deployment to France. He was knighted in January 1918 and died the following year, age 70, in London, England.