The Toronto-area sprinter comes through at the Pan Am Games. And he's just getting started. 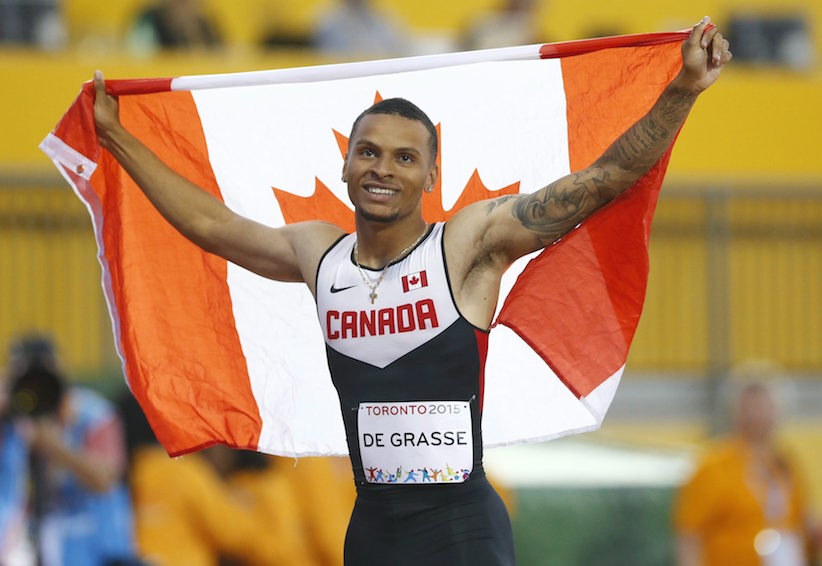 Andre De Grasse, of Canada, holds a flag after he wins the gold medal in the men’s 100m final during the athletics competition at the 2015 Pan Am Games in Toronto on Wednesday, July 22, 2015. (Mark Blinch/CP)

The knock against these Games from the outset was the lack of compelling stories. No Usain Bolts to smash world records. No established star like Clara Hughes to galvanize the hometown crowd.

To lay that responsibility on the shoulders of a rather slight 20-year-old, just three years into his sprinting career, was asking a lot. But Andre De Grasse delivered on Wednesday, winning the marquee event of the 2015 Pan Am Games just a stone’s throw from where he ran his first race.

It wasn’t even his best race. De Grasse took the 100-metre in 10.05 seconds, the first final he’s run over 10 seconds in the event in his last three meets. He got a slow start—as has been his wont—before making up the lost time in the final 50 m, edging Ramon Gittens of Barbados by just .02 seconds.

Record or no record, it’s the stuff of memories. It will certainly stick in his.

“It’s a once-in-a-lifetime opportunity to compete at home, in front of family and friends,” he said afterward, glancing back as the last fans trickled out of the stadium at Toronto’s York University. “This is one of the greatest moments of my life, right now, I’m really happy about it.”

After a slow start in Tuesday’s heat, De Grasse had swaggered through his semifinal on Wednesday, bursting from the blocks to clock in at 9.97, glancing back at BeeJay Lee, his teammate at the University of Southern California track team, as he crossed the line.

The time was wind-aided, which kept it out of the Pan Am record books (the current mark of 10.00 is held by Kim Collins of St. Kitts and Nevis). But what De Grasse did Wednesday night still left an indelible mark, lifting his country back into the upper echelons of a great sport after a considerable absence.

De Grasse, in case you’ve missed the last 48 hours of frenzied coverage, is the Scarborough, Ont.-born kid who showed up for his first high school track meet three years ago, wearing his basketball shorts and a set of spikes borrowed from his buddy. Then 17, he ran the 100 m in 10.9 seconds at York’s old track, causing an instant stir in Canadian athletics.

He gave a tantalizing glimpse of his world-class potential on May 17, when he ran a 9.97 100-m for USC at the Pac-12 championships—the first sub-10-second run by a Canadian in 15 years.

Again, both times were wind-aided—but not by much. He was clearly the fastest man in the NCAA, and he pressed the point home when he returned in July for the Canadian Track and Field Championships and ran another sub-10 100-m without wind, a 9.95.

So while his coaches spent the last few days trying downplay expectations, he arrived at the 2015 Pan Am Games, hosted in his home country, to a breathless new fan base.

The last Canadian to break the 10-second barrier was Bruny Surin, who ran a 9.84 at the 1999 world track and field championships—fast enough to tie Donovan Bailey’s national record but, on that day, not fast enough to win gold.

“I talked to him about the pressure,” said Caryl Smith Gilbert, De Grasse’s USC coach. “I told him to use this as an experience, to learn how to qualify and what he needs to do for [the 2016 Olympic Games in] Rio. I always try to get him to think of something bigger, to diminish the pressure.”

Evidently, it worked. De Grasse seemed relaxed and in command during both of his races Wednesday. The slow start in the final drew shudders from Smith Gilbert, but he was able to maintain composure and confidence—the mark of a natural.

“I just had to keep pushing,” he said, “and execute the last part of my race and just manage somehow to get the victory.”

His win capped a crowd-pleasing night at York University’s stadium, where Sarah Wells of nearby Unionville, Ont., took silver in the women’s 400-m hurdles, and Melissa Bishop of Windsor, Ont., won gold in the women’s 800-m with a dramatic, home-stretch surge.

De Grasse credited the hometown crowd with spurring him to victory. “I’ve got my first senior international medal, and at home,” he said, “so I just want to keep it going. I want to get ready for the 200-m and try to bring home another medal.”

But his performance here, like those of the past few months, speak to something a lot greater than a guy buoyed by local support, and fans will see it as De Grasse moves on the 200-m and 4 x 100 relay. Take it from Smith Gilbert, who has coached athletes who went on to compete at the Olympics: “Andre De Grasse is something special. I’ve never seen it, and I don’t know if I’ll see it again. He’s just wired for it.”