How kelp, a negative-footprint organism, could alter the future of seafood 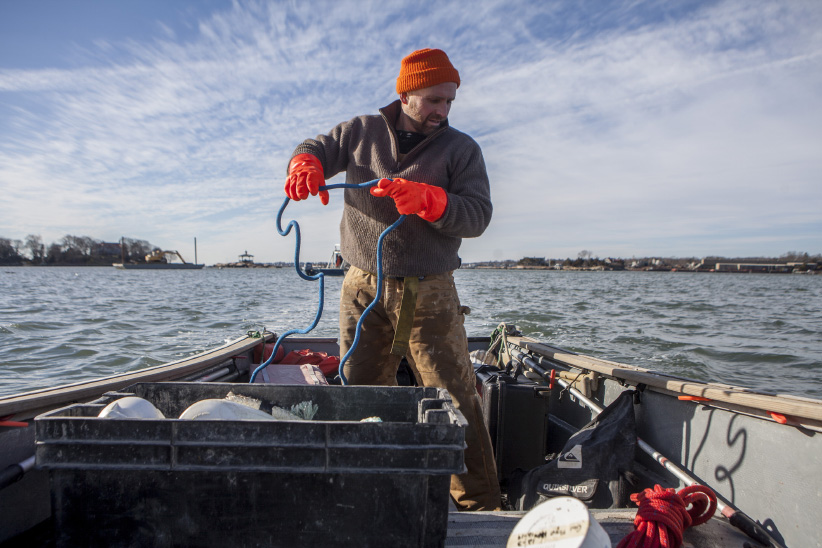 Imagine, if you can, a farm where the main crop of versatile greens grows a reliable two centimetres each day. Which makes for a potato-drubbing yield of 20 tonnes per acre, twice yearly. Now take note that this happens without the aid of any fertilizer whatsoever.

There’s more. For beneath the protective shade of that lush brown and green canopy there is lots more farming going on. Four different protein-rich animals are being cultivated. Three of these are widely considered to be delicacies; the fourth is a bistro staple. Collectively, their annual yield from that same multi-use acre is another quarter-million units. And for all that, no feed is required.

You may think that sounds a little far-fetched, but it is happening already—underwater, just off the coast of New Haven, Conn., in Long Island Sound. The farming system, conceived to utilize the entire water column, was developed by a non-profit called GreenWave, and is called 3D. It yields two varieties of mild, but luscious, sugar kelp. And the little animals thriving beneath are four of our favourite shellfish: mussels, oysters, scallops and clams. 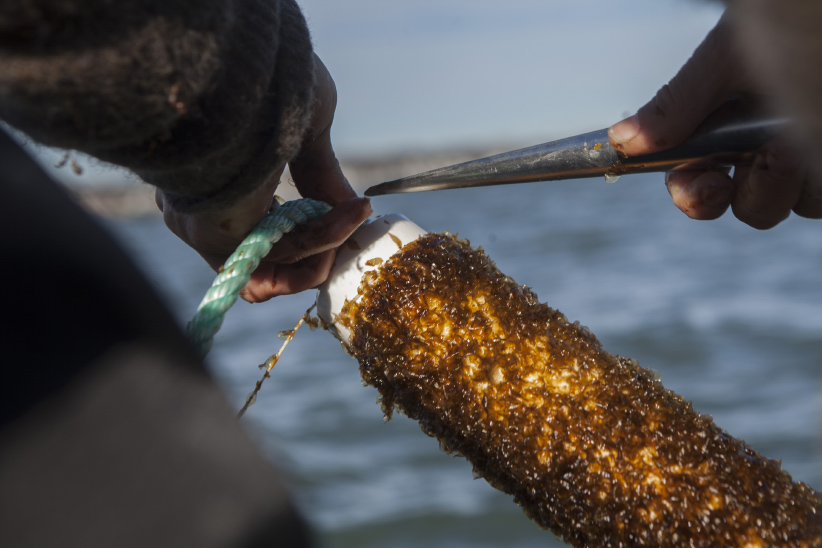 Now, if you know anything about kelp or bivalves you will know that this array of organisms was not assembled by accident. To say that this farming system needs neither fertilizer nor feed is not quite true. For kelp and bivalves are the stars of Mother Nature’s oceanic clean-up crew; they feast on waste and pollution.

Kelp sucks up carbon with an appetite five times more rapacious than any land-based plant. It also absorbs vast quantities of farm-fertilizer run-off like nitrogen and phosphorous. The four bivalves are all filter feeders, and their champion, the oyster, gobbles up rubbish faster than a stoned teenager. Each day, a single adult oyster filters 200 litres of water, stripping it of dirt, algae and nitrogen. So aside from great food, all that this farm leaves behind is clean water.

Related: Learning from and by the sea

In modern parlance, that’s called a negative footprint. And for assembling a profoundly productive system that is so irrefutably restorative, GreenWave’s Petty Harbour, N.L.-born mastermind, Bren Smith, won the US$100,000 2015 Fuller Challenge, named for the late U.S. thinker and designer Buckminster Fuller.

“I haven’t created anything new,” Smith demurred when reached by phone recently in California, where he was looking to set up new 3D locations. “I’ve just assembled a bunch of exciting new techniques that coalesce in one sensibly diversified sea basket.”

His epiphany was prodded along by circumstance and experience, much of it dire—read, the life of a Newfoundland fisherman. He began at age 14 on the Georges and Grand Banks. When the cod fishery collapsed, he had already moved on to trawling on the Bering Sea, where industrial fishing practices—like regularly wasting tens of thousands of kilos of bycatch—gave him pause.

Smith’s next stop was in the then-nascent, antibiotic-intensive aquaculture industry in northern Canada, which in hindsight he now calls “hog-farming at sea.” Next, he moved on to Long Island Sound, picked up an abandoned oyster-bed lease and founded the Thimble Island Oyster Co. (I ate plenty back in the day). Then, seven years in, hurricanes Irene and Sandy successively thrashed his farm and buried his crop. Smith sized things up: ocean acidification was higher than ever, local waters were warming and the lobster were fleeing north. It was time for a rethink.

“Climate change was supposed to be a slow lobster boil,” Smith observed, ruefully.

Instead it was happening fast and with a vengeance—expressed in extreme weather, forest fires and drought. Much land-based farming is struggling (think back on this summer’s rubbish crop of thirsty vegetables). Kelp, meanwhile, is easy and cheap to grow, and has hit a critical mass in the current cuisine: from nori crisps at a restaurant bar to salads, butters, salts, purées for sauce and umami-enhancing brines, kelp is unavoidable these days. And this is just the beginning.

“If the new face of climate change is drought—and it looks that way—we gotta adjust quickly,” Smith said. “What we need is a Manhattan Project around sea vegetables, and we need to do it quickly.”

You might already have eaten samphire, or sea asparagus, which was almost certainly farmed. Next, you’ll encounter oyster weed and sea lettuce. Sugar kelp, meanwhile, remains at the core of Smith’s 3D Ocean Farming model.

In June, a delegation of leading world chefs came to visit the facility at New Haven. Among them was René Redzepi, who immediately expressed interest in launching his own 3D farm at his new farm-based restaurant Noma, opening in Copenhagen in mid-2017.

“Shellfish and seaweed aquaculture is the future; it’s the magic bullet,” enthused Ned Bell, resident chef and spokesperson at Ocean Wise, the conservation arm of the Vancouver Aquarium. “Bren is maybe 10 steps ahead of us—he’s giving us a solution.”