A pub's-eye view of the Opening Ceremonies

What better place to tap the British soul on the eve of the Opening Ceremonies? 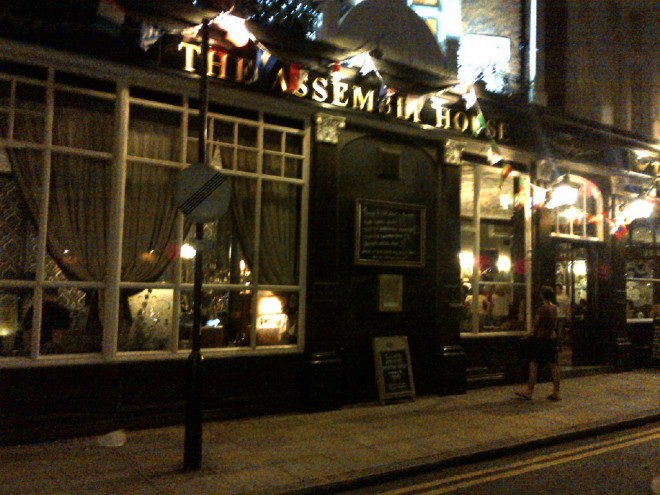 Oh, you can have your big stadiums but what better place to tap the British soul during the Opening Ceremonies of the 2012 London Summer Games than in a pub?

7:45: I set out from Team Maclean’s palatial rental home in Tufnel Park in search of fellowship.

7:55: Walking, walking. So many pubs, which to choose? I’m in Kentish Town in northwest London. A strange name for a neighbourhood. It’s as though the townsfolk couldn’t quite agree on Kent. They wanted a Kent-like name, but not Kent, just something Kent-ish.

Hullo, what’s this? The Assembly House. Noise pouring out the door, garish wallpaper in the British tradition. Long rows of draft taps on the bar. TV screens aflickering. I’m home!

8:05: Meet Katherine Twamley, a transplant from Ireland, her husband Ricardo Grau-Crespo from Cuba. “It’s funny, I think we have been critical up until this point,” says Twamley, “and now that it’s arrived I feel much more congenial towards the whole thing.” Grau-Crespo doubts the economic activity the Olympics generate will come close to offsetting the cost. But he gives a cheerful shrug: “It will be a waste of money, but it will be a nice waste of money.”

8:20 Anna Patrick, a construction project manager, figures the best sort of place to watch the Games is from places like this: full of buzz, beer and friendship. She didn’t even try for event tickets. She’s lived through all the years of Olympic dramas and naysayers, and now she’s ready to enjoy the moment. “You just have to put that aside because London is like that anyway,” she says. “We have doubts and fears about everything.” 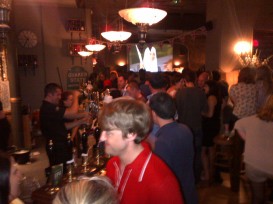 8:25 Yes, Anna, there’s been more than enough bitterness, and not enough bitter. Barkeep, pull me a pint of that aptly named Medal Pursuit, my good man.

8:30-ish in Kentish. “If you’re not going to be at the ceremony” says Ben Saw, a recruitment consultant, “you might as well be at a pub.” Saw and his friend, Chris Goodman, a general practitioner, have stepped out for a breath of fresh air. “I’m hoping for a good British sense of humour,” Goodman says of the ceremonies, “an idiosyncratic kind. I quite like that they’ll have a bit of Mary Poppins there, and James Bond. It’s not like the Beijing Olympics. I don’t think we should do bombastic fireworks. A bit of history, a bit of what we’re about. What we have contributed.”

8:40 and on-ish. Barkeep, another pint of Medal Pursuit, it goes down rather well. Now we’re getting to the pith and substance of the opening ceremonies. And like the good, er, Dr. Goodman, said, there’s plenty of history. There’s sheep and maidens and 1,000 people bashing away on drums. The Industrial Revolution is celebrated, with smoke-spewing chimneys rising from the floor. No erectile dysfunction here, unlike that unfortunate cauldron incident in the Vancouver opening ceremonies. Here in the bar they’re cheering a celebration of the National Health Service. Wow, would that ever happen in Canada?

Another pint if you please, and one for my new friend Paul Johnson, back home in London from his teaching job in Bangkok.

“To be honest,” Johnson says, “I’m not a massive fan of the Olympics. People on the whole are a bit skeptical.” He pronounces the evening’s early going “a bit weird. I’m waiting for the Teletubbies and the Hobbits to come out of the ground.” He returns to his table of mates with a final thought: “Let’s hope they don’t f–k up.”

I keep calm and carry on. My heavens, there are indeed Mary Poppinses, a whole squardron of them falling from the sky with their brollies. And wow, there’s Daniel Craig as James Bond, and that woman with the corgis.

Good Lord, did she really jump from the helicopter? Steady on, old girl, leave that sort of thing to the grandkids. William or Harry would be up for it. This bitter is rather stronger than I thought. Hey, Mr. Bean. I love Mr. Bean! The crowd here is going wild and I note Mr. Johnson is laughing and cheering with the best of them. All told, it’s a grand show, without being too full of itself. It can’t seem to go five mintues without throwing in a few inside jokes. I like that; there’s altogether too much stuffiness in these Olympic ideals.

But it goes on, as these things do, once the parade of athletes begins. So many countries; 204 seems rather excessive for this little planet, perhaps amalgamation is in order? Get it down to a baker’s dozen or so. The poor old Queen, first the helicopter jump then having to wait until way past midnight when all the flags are planted before she could declare these Games open.

But open-ish they are, finally.

No, barkeep, no more, I’ve an early morning, off to see the rowing, don’t cha know.