'A sadness you can’t describe': The high price of Quebec's Bill 21

Amrit Kaur wanted to be a teacher in her home province. After Bill 21, she’s moving to B.C. 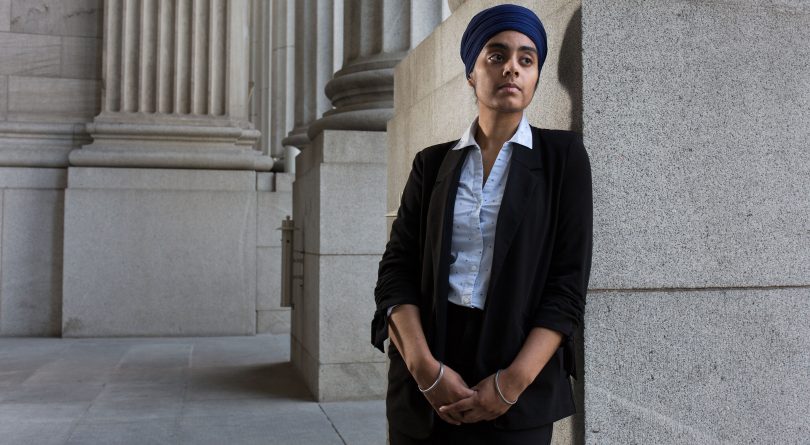 As part of Kaur's adherence to her Sikh faith, she practices community service through her gurdwara—and she wears a turban (Photograph by Nasuna Stuart-Ulin)

On June 16, after Amrit Kaur attended her graduation ceremony in Ottawa, she drove with her parents and brother back to the family home in Vaudreuil, a suburb of Montreal, and, still in her graduation dress, sat down at the dining room table to upload photos.

Kaur, 28, has just completed a bachelor of education degree at the University of Ottawa and was hoping to start teaching this fall in Quebec, where she has lived since she was ﬁve. But as Kaur uploaded pictures, she checked social media, where she learned that the National Assembly of Quebec had just passed Bill 21.

“We were all just hanging out, talking about the day and stuff. And that comes up.”

Kaur, a Sikh, wears a turban. Bill 21 means that she will not be able to teach in Quebec. The news came as a personal blow.

“You think something like this is just hate speech, or the product of it, but when it actually materializes into something, you feel racism toward yourself,” she says. “And that feeling of racism, being disenfranchised, you can hear about it, but when you feel it on yourself, there’s a sadness you can’t describe. That feeling, I don’t wish it on anyone.”

Bill 21, which was promised by Quebec Premier François Legault during the 2018 campaign, bans police, teachers and government lawyers from wearing religious symbols on the job in the name of secularism. It will mostly affect Sikhs who wear turbans, Muslims who wear hijabs and Jews who wear skull caps. Those communities have gone to court to have the law overturned.

On July 18, a Quebec judge rejected an injunction application sought by the National Council of Canadian Muslims and the Canadian Civil Liberties Association. On July 22, Kaur was among those who stood on the steps of the Quebec Court of Appeal in Montreal to announce an appeal of that decision.

The legal challenges will take time. Kaur needs a job now, so she is likely to move to British Columbia. One thing she will not consider is giving up her turban.

“It’s a personal conviction that I can’t leave at the door,” she says. “It’s something that is so a part of my identity, and so a part of my being that I can’t disassociate it from my body. I wear it at all times. The government asking me that is just so disrespectful.”

She and other religious minorities are increasingly feeling the result of that disrespect on the street. “After this bill, and while it was being talked about, I would walk down the streets of Montreal and people would look at me. And I was like, that never happened before. People just don’t talk about religion. It’s something I’m proud to say as a Quebecer, we don’t think like that. But this whole thing … people start believing it. And it’s the ﬁrst time I feel uncomfortable in Montreal.”

Kaur speaks English, Punjabi and French, and thinks of herself as a Quebecer. She likes to watch Premier League soccer, hang out with friends and listen to the Red Hot Chili Peppers.

But as part of her Sikh faith, she accepts an obligation to do community service. She volunteers through her gurdwara, working to help resettle refugees, provide care packages for women in shelters and work as an activist with the World Sikh Organization.

She can’t understand why her provincial government is discriminating against her because of her beliefs. “What am I supposed to do? Quebec is my home. I’ve always tried to give back. I’m not someone who’s living on welfare. I don’t come from a family that’s mooching on the government. My parents raised us well. They instilled values that are akin to any French Quebec family. Why am I being treated differently?”

Kaur wants to hear more from Prime Minister Justin Trudeau, who, since the law passed, has only commented on this once, in Washington, where he promised to support the rights of people like Kaur.

“We do not feel that it is a government’s responsibility or in a government’s interest to legislate on what people should be wearing,” he said. “We have a strong Charter of Rights and Freedoms that guarantees freedom of religion, freedom of expression, and we will certainly ensure that our views are well-known and continue to defend Canadians’ rights.”

But Legault has invoked the notwithstanding clause of the Charter, meaning it likely can’t be used to challenge the law, and so far the federal government has not indicated whether it might challenge the law.

With an election coming in which the Liberals hope to make gains in Quebec, political observers believe Trudeau wants to avoid a showdown with Legault over the law, which has the support of many Quebecers, especially rural francophones.

READ MORE: A letter from Alberta to my Quebec friends

Legault has defended the law as “moderate.” “In 90 per cent of the jobs in Quebec, they can wear religious signs. So the message that we send them is that we are open, but we also made sure that, for people being in an authority position, we forbid those signs.”

Kaur is glad that Trudeau spoke up but wants him to do more. “I wish that maybe he could have made more statements, or a more detailed statement about this, because right now, someone who is directly affected, they don’t know who to turn to,” she says. “So, knowing that your government is looking out for you and they have you in mind is the most reassuring thing. And if we’re champions of human rights internationally, we should be champions nationally. And I don’t know if that can be said.”

Kaur, whose home is not far from Trudeau’s Montreal riding, says she often saw him at Sikh events while she was growing up. “A lot of these politicians, we welcomed you into our communities. What are you going to do for us now that we need you?”

Cameron Ahmad, Trudeau’s director of communications, would not comment on the possibility of Ottawa intervening in a legal challenge, but said Trudeau has repeatedly made his opposition to the law clear. “The Prime Minister has made his position on this bill and the Charter of Rights very clear every time he has been asked about it,” he said. “And as a federal government we will always stand up for people’s rights and liberties and denounce discrimination.”

This article appears in print in the September 2019 issue of Maclean’s magazine with the headline, “‘A sadness you can’t describe.’” Subscribe to the monthly print magazine here.