After residential school, he vowed to go back to his traditional ways. As an artist, his work became known across Europe. 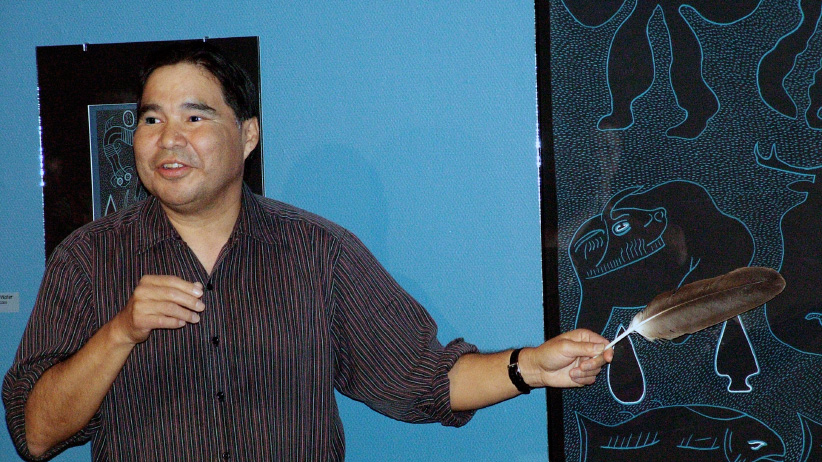 Ahmoo Angeconeb was born April 19, 1955, in Sioux Lookout, Ont., to George, a commercial fisherman, boat maker, trapper and hunter, and Patricia, a stay-at-home mother. Ahmoo (meaning “bee” in Ojibwe) was the sixth of 10 kids.

The family lived in a cabin on the south shore of Whitefish Bay, one of the three communities making up the Lac Seul First Nation. There were just three or four scattered houses there, as opposed to the more populous north side of the bay, says Ahmoo’s sister, Juliette Blackhawk. “The reason my dad built there is he was trying to protect us.” The federal government and even some converted community members, explains Juliette, wanted to banish Indigenous ceremonies such as dancing and singing. “He protected us so we could carry on our customs and traditional way of life.”

From the time he was five, Ahmoo showed a prodigious talent for drawing. He would scrawl pictures on the wall using a .22-caliber lead bullet. “We had (his art) all over the wall in our one-room house. He would sketch anything,” says Juliette. Often his images, even then, were spiritual. “He was a really serious kid, the way an old man’s spirit is,” she recalls.

Ahmoo was sent to residential schools in the 1960s in Sioux Lookout and Kenora, Ont. For Ahmoo, it was not entirely the spirit-killing experience it was for many Indigenous children, says his cousin Garnet Angeconeb. “But it was lonesome, and you were away from your community.” Ahmoo, says Garnet, got positive attention because of both his artistic talent (he sold his first painting at age 13) and his skills as a hockey player.

Smallish but nimble, Ahmoo played for the Kenora Muskies of the Manitoba Junior Hockey League in the early 1970s. He was a superb skater, a forward “who was all over the ice,” says Garnet.

After high school, Ahmoo began formal training as an artist, first at York University in Toronto, then at Thunder Bay’s Lakehead University. He married and, with his wife, Barb, moved to Halifax, where Ahmoo was both a student and teacher at Dalhousie University. The couple adopted and raised two children—Simone-Claire and Hunter—from a Winnipeg family.

Ahmoo became well-known for his printmaking, and for more than a decade he would scrape together enough money to spend six months of the year traipsing around Europe, showing and selling his work. “Ahmoo was brave. But he wasn’t brazen at all,” says Sharon Godwin, director of the Thunder Bay Art Gallery, where Ahmoo had exhibitions and workshops. “He was quiet, respectful. You wanted to get to know him.” After Ahmoo and Barb divorced, he would sometimes take his kids along during his travels.

On one trip, recounts Godwin, Ahmoo met a wealthy Parisian who connected him to an art dealer who, enchanted by Ahmoo’s quiet charisma, gave him the number of Prince Albert II of Monaco. Ahmoo called him up, the prince bought some of his paintings, and the two kept up a correspondence for years.

Ahmoo was influenced early on by the Indigenous artist Norval Morrisseau, but he had his own style, says Godwin. “Many of his best pieces were drawings done on black paper with blue and white pencil crayon. It sounds really simple, but they are large and very detailed drawings, often about his life and his community.”

After his residential school experience, Ahmoo “was very adamant that he would go back to his traditional ways. And he did,” says Garnet. Through his art, “he was a bridge-builder between Indigenous culture and other communities.” Still, he was better-known in the galleries and even palaces of Europe than in communities closer to home. “You would never know he was this renowned artist,” says Jennifer Thomas, who helped Ahmoo with an art project he was doing in northern communities.

In 2010, Ahmoo had a stroke, losing partial use of his left arm. Being right-handed, he kept drawing but could no longer carve. Ahmoo had been diagnosed with diabetes in his 20s, and in the fall of 2014 lost a leg below the knee due to the disease. “When he was in the hospital, he would just keep on drawing,” says Godwin. “And he would sell drawings to the nurses and the doctors.”

On June 9, Ahmoo, who had been having heart issues, was travelling from Sioux Lookout to his home in Whitefish Bay in a reserve medical van when he suffered a heart attack and died. He was 62.