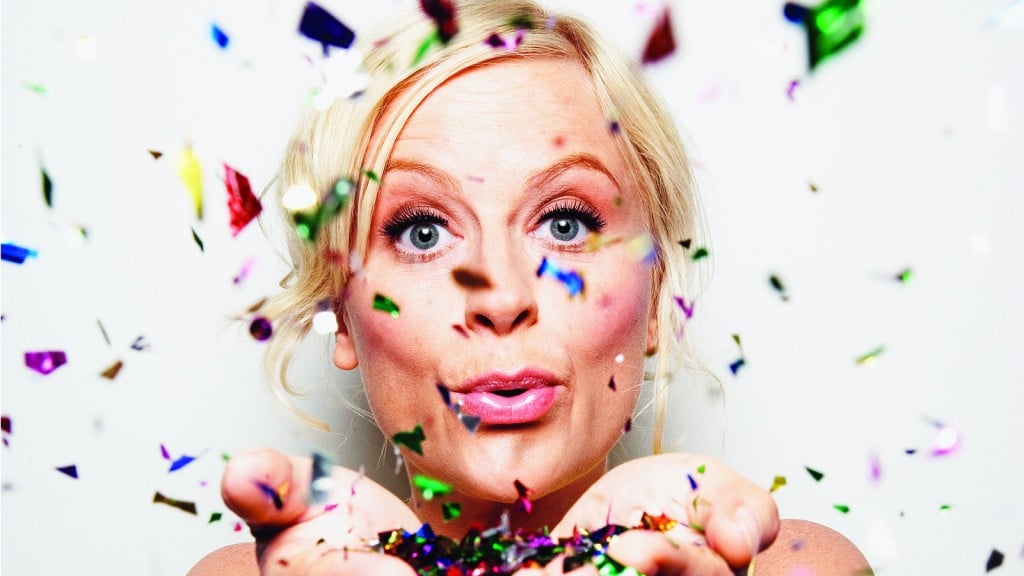 In a cynical culture that conflates snark with smarts, her message—‘Be nice. Work hard.’—is a radical one

For some, the name Amy Poehler will summon the funny/manic comedic bits that brought her stardom on Saturday Night Live over a decade ago: her repertoire included Kim Jong Il, Hillary Clinton, and “Kaitlin,” a hyperactive pre-teen. Others will think of Leslie Knope, the unsinkable government bureaucrat with big dreams whom Poehler has played for seven seasons on NBC’s ensemble comedy Parks and Recreation. Or they’ll flash to her gig as a Golden Globes’ co-host with Tina Fey in which the two long-time friends and collaborators merrily skewer Hollywood. “The Wolf of Wall Street is another nominee tonight,” Poehler told the crowd this year. “I really loved the film, but some of it was too graphic. I mean, if I wanted to see Jonah Hill masturbate at a pool party, I’d go to one of Jonah Hill’s pool parties.”

To view Poehler merely as a potty-mouthed Carole Lombard or Betty to Fey’s Veronica would be a mistake, however—one that overlooks her stealthy behind-the-camera ascent as a multimedia mogul and self-styled role model to young women. Poehler’s three-year deal at NBC Universal, where she produces Parks and Rec, puts her in the executive-director chair on a slate of projects: Welcome to Sweden, a comedy set in Scandinavia starring her brother, Greg Poehler; the upcoming Old Soul, which she co-created, starring Natasha Lyonne as an aide to a group of elderly people, and which is already being hailed as upending ageist stereotypes; and a sitcom in the works about a young agnostic woman who inherits a church. Poehler’s reach extends to Comedy Central, where she’s executive producer of (and occasionally appears on) Broad City, a comedy about two brash young female misfits who smoke a lot of weed. The show has been praised as a fresh take on TV female friendship: “sneak attack feminism,” the Wall Street Journal called it.

Poehler is also busy seeding the next generation. The Upright Citizens Brigade, a sketch-improv troupe she co-founded in the early 1990s, has teaching centres and theatres in New York City and Los Angeles. There’s also Smart Girls at the Party, the online community she co-founded in 2008 to provide teens and tweens with an antidote to online cynicism. Its chipper motto: “Change the world by being yourself!” Poehler is active on the site, fielding questions about life on her popular “Ask Amy” video blog. This month, Smart Girls at the Party was purchased for an undisclosed sum by Legendary Entertainment; part of the deal, no surprise, was Poehler’s continued involvement.

Now the blond multi-hyphenate marks another rite of successful-woman passage with the publication of a memoir/advice book/empowerment vehicle. Its title, Yes Please, was chosen, she writes, because it’s “often the right answer: … Can we figure out what we want, ask for it, and stop talking? Yes, please. Is being vulnerable a power position? Yes, please. Am I allowed to take up space? Yes, please. Would you like to be left alone? Yes, please.”

The book cleaves to a now-familiar formula—a pastiche of mementoes, memories and insights. She shares photos, old report cards, entries from her parents and friends, including Seth Meyers. There are lists and funny haikus about cosmetic surgery. A chapter on sex tips includes: “Keep your virginity for as long as you can” and “Get better at dirty talk.” Men get advice too: “We don’t need it to last as long as you think.” What emerges is a wonky, entertaining hybrid—a 21st-century Free to Be You and Me, a more wry Lean In, and a reflective, lessons-learned “missive from the middle” from a famous 43-year-old mother of two boys who knows a few things.

Like her upbeat character Leslie Knope, who has giddy girl crushes on female senators, Poehler is proof that it’s possible to succeed by being enthusiastic and competent, optimistic and intelligent, funny while doing good. “Be nice. Work hard. Don’t pretend things are perfect,” she writes. In a cynical culture that conflates snark with being smart, it’s a radical message.

Poehler approaches the well-trod territory of women, career and ambition, but in quietly boundary-pushing ways. Her website, the character she plays, and even Broad City all emphasize the power (and fun) of female friendships, collaboration, and the fact that smart, interesting women occupy low-level jobs too.

Poehler’s own ambitions were stoked when she starred in The Wizard of Oz in the fourth grade. “Dorothy is Hamlet for girls,” Poehler writes. “I liked attention. Attention and control. Attention. Control, and as it turns out, laughs.” Role models are crucial, she says, citing Carol Burnett as someone who showed her how to be a “benevolent leader”: “Watching that show proved that good comedy can be fun and that you don’t have to treat people badly to be on top.” She likes “bossy,” a word Sandberg tried to ban: “I understand how ‘bossy’ can seem like a s–tty way to describe a woman with a determined point of view, but for me, a bossy woman is a woman to search out and celebrate.” Poehler’s unbridled enthusiasm in being the boss is refreshing. “Producing is the S–t,” she writes, “when you get to actually be in charge and apply all the things you know.” So is the response she’s had—there’s none of the sniping that greeted the launch of Mindy Kaling’s show, for instance.

Poehler’s relentless likeability may be a factor. Like Burnett, she’s a team player. She references “wonderful books by wonderful women” that helped her write her own—Fey’s Bossypants, Kaling’s Is Everyone Hanging Out Without Me?, Lena Dunham’s Not That Kind of Girl, and the work of Nora Ephron, godmother of witty career-woman confessionals. Better, though, she also namechecks the three women who provide her with domestic back-up and help her raise her sons, calling them her “wives.”

That lesson took her time to learn. She used to “hate” her Tweetie Bird looks, she writes (though her “plain face was a perfect canvas to be other people”). Poehler knows to put the whine in context: “I am not underestimating the access I get as a BLOND, WHITE lady from AMERICA.” On that score, she writes movingly about a 2013 trip to Haiti in support of Worldwide Orphans Foundation, while addressing people who gripe about celebrities taking on causes: “Who cares why you decide to help?”

Yes, Please could also have been called No, Thanks. Poehler knows when to stand up for herself. That was evident where Fey tells a story in her book about a SNL script read-through where Jimmy Fallon turned to Poehler and said, “Stop that! It’s not cute! I don’t like it!” Poehler shot back, “I don’t f–king care if you like it,” Fey writes, noting the moment signalled a “cosmic shift”: “Amy made it clear she wasn’t there to be cute. She wasn’t there to play wives and girlfriends in the boys’ scenes. She was there to do what she wanted to do.”

Poehler draws similar lines in her personal life. “As I get older, I get real pleasure from maintaining boundaries with strangers,” she writes. That includes readers. She won’t discuss the breakdown of her 10-year marriage to actor Will Arnett: “I don’t want to talk about my divorce because it is too sad and too personal,” she writes. She does say the experience is like putting everything you care about on a blanket: “The process of divorce is about loading that blanket, throwing it up, watching it all spin, and worrying what stuff will break when it lands.” There would seem to be no place for bitterness in Amy Poehler’s sunny queendom, though she does pointedly note that Heartburn, Ephron’s comic roman-à-clef about her horrible divorce from a philandering Carl Bernstein, helped her keep her story “funny and real.”

That’s a story always in flux, she tells readers: “We aren’t one story. We can change our story. We can write our own.” And if people don’t like it, Amy Poehler has some choice words for them on what they can do.